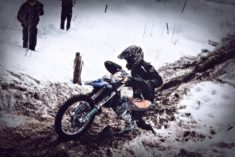 The 2017 Maxxis FIM Enduro World Championship gets underway this weekend with the opening round of the season at the GP AMV of Finland.

After five months of waiting, the EnduroGP is back. And to start the 2017 season that will take in nine rounds, the stars of world enduro are tackling the infamous Finnish race — the Paitsi (Paijanne).

With the agreement between FIM, ABC Communication and the manufacturers in the end of 2015 on opening the Maxxis FIM Enduro World Championship to new types of racing, Alain & Bastien BLANCHARD (ABC Com) quickly contacted the HMK, organiser of this very famous event in northern Europe. Kenneth LAAKSONEN, president of the HMK, quickly responded very favourably to this proposal to integrate the EnduroGP calendar with the backdrop of a winter enduro back to the calendar.

The HMK, supported by the Finnish Federation (SML), makes it a point of honour to show that enduro can also be practiced in a very cold weather, on snow and ice. They’ve organised the Paitsi since 1927, with a break during World War 2 (between 1940 and 1948 exactly). Formerly known as “Päijänteen ympäriajo” because it takes place around Lake Päijänne, this “rallye auto style” race has crowned many Finnish world champions such as Kari TIAINEN, Petteri SILVAN, Juha SALMINEN and Mika AHOLA.

In recent years, two well-known riders of the EnduroGP paddock have dominated the race: Marko TARKKALA (Husqvarna) and Antti HELLSTEN (Husqvarna). The Finns are accustomed to saying that you’re not a true champion until you have won, or at least finished the Paitsi!

Nicknamed “the Finnish adventure”, this two-day race attracts all types of riders, from experienced riders to novices. This year the 263 riders (EnduroGP + national race) will leave Vierumaki and will have to do more than 11 hours and 30 minutes of racing with 15 different special tests on Saturday and then seven hours and 30 minutes of racing and 11 tests on Sunday before arriving in Helsinki, more precisely in the district of Malmi. The racers will not go through the special stages one after the other, as they will also have to face long and tiring transfers, with the crossing of the Paijanne Lake, frozen at this time of year in its northern part.

It is in this mythical setting that the stars of the EnduroGP will start on Saturday, March 25th for the GP AMV of Finland on frozen and snowy tracks, nine years after the last winter enduro in the series (Sweden 2008)…

After a 2016 transition year, the evolution of the Maxxis FIM Enduro World Championship has come to an end and the EnduroGP has now become a category in its own right (over 250cc 4t and 2t).
In 2016, Matthew PHILLIPS (AUS – Sherco) won the first EnduroGP title with great consistency. But who will succeed him in 2017? The Australian is the great favourite to his own succession. With a full season on Sherco machinery under his belt, PHILLIPS should enter the GP AMV of Finland stronger than ever. But PHILLIPS will have to face tough rivals if he wishes to secure EnduroGP title #2.
Indeed, this EnduroGP category offers an impressive array of talented riders. Mathias BELLINO (F – Husqvarna), Christophe NAMBOTIN (F – KTM), Steve HOLCOMBE (GB – Beta), Loïc LARRIEU (F – Yamaha), Nathan WATSON (GB – KTM), Alex SALVINI (I – Beta), Cristobal GUERRERO (E – Yamaha) and Giacomo REDONDI (I – Honda) are just some of riders who have the talent and speed to aim high.
If you add to this the arrival of Christophe CHARLIER (F – Husqvarna) and the perseverance of riders such as Jaume BETRIU (E – KTM) and Deny PHILIPPAERTS (I – Beta), then this category looks extremely competitive.
For the Grand Prix AMV of Finland, local stars Antti HELLSTEN and Marko TARKKALA have decided to challenge the riders of premier EnduroGP category. The battle between the last two winners of the Paitsi and the crème de la crème of the World Enduro series is likely to be worth its weight in gold.
Mika BARNES (KTM) and good numbers of Scandinavians like Dick BERGMANN (SF – KTM), Aleksi JUKOLA (SF – KTM) and Jussi ARVAJA (SF – Sherco) will also be on hand.

In the newly formed Enduro 2 category (up to to 250cc 4t and 2t), all eyes will be on the two-time world champion of the previous Enduro 1 class, Eero REMES (SF – TM). The TM Racing rider has never participated in the legendary Paitsi race before and so will be keen to make it a winning debut ride when all the eyes of the enduro world are watching. A win in Finland will put him on the right track towards a third consecutive world crown.
From the MCCANNEY brothers — Danny and Jamie — to Remes’ teammate Manuel MONNI (I – TM), not to mention Pascal RAUCHENECKER (AUT – Husqvarna), Davide GUARNERI (I – Honda), Jérémy JOLY (F – Beta), Jonathan BARRAGAN (E – Gas Gas), Thomas OLDRATI (I – Husqvarna) and Lorenzo SANTOLINO (E – Sherco), ensures REMES path to victory will be far from easy.
In this new category Enduro 2, KTM’s talents of Josep GARCIA (E) and Daniel SANDERS (AUS) are more than capable of creating a surprise.
On the Finnish side, there is a high calibre list of riders ready to defy the world stars. Roni NIKANDER (KTM), Henric STIGELL (Husqvarna) and Jiri LEINO (KTM) are among the 14 Scandinavian competitors in Enduro2 chasing a podium result.
Frenchman Elie VECCHI (Husqvarna) returns to EnduroGP thanks to the invitation of the sponsor of this Grand Prix and a legendary and loyal partner of ABC Communication: AMV Assurance.

Hoping the winter conditions play to their advantage, Sweden’s Albin ELOWSON (Husqvarna) and Mikael PERSSON (Yamaha) will have a great shot at victory in the Junior category and will be looking to widen the gap against rivals unaccustomed to this type of racing. Davide SORECA (I – Honda), Brad FREEMAN (GB – Beta) and Kirian MIRABET (E – Sherco) will be hoping to adapt fast and land a decisive blow to both ELOWSON and PERSSON’s chances of winning.
However riders such as Eemil POHJOLA (SF – Husqvarna) and Antti HANNINEN (SF – Husqvarna) already know this race and could create surprise to come to play the title.
Mirko SPANDRE (I – Suzuki), Matteo CAVALLO (I – Beta), Emmanuele FACHETTI (I – TM) and Antoine MAGAIN (B – Yamaha) will also be interesting to watch.

Finally, in the 125cc Youth Cup, only Andrea VERONA (I – TM) will make the trip to Finland and so will have to face an armada of Finnish and Swedish riders. Roni KYTONEN (SF – Husqvarna), the son of the former world champion, Marcus ADIELSSON (S – Husqvarna), Hugo SVARD (SF – Husqvarna) or Emil JONSSON (S – KTM) and contenders for top honours.

With the wait all but over, the opening round of the 2017 Maxxis FIM EnduroGP World Championship is ready to begin. Spectators, media, industry and fans of enduro are eagerly awaiting the stars of the sport to tackle a truly unique and challenging start to the season in Finland.