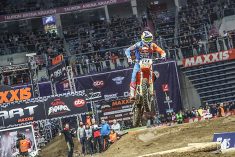 As usual, the “Sport Up” promotion agency, supported by the Lodzki Klub Motorowy, has been given the opportunity by the FIM and the Polski Zwiazek Motorowy (PZM) to host the the opening round of the 2019 SEWC. The LKM are therefore organising a SuperEnduro for the 8th time. After the resounding successes of 2017 and 2018 when the Tauron Arena was sold out (12,000 spectators), this same sports hall in Krakow was the obvious venue for this year’s action.

As has been the case for the last two years, Tomasz GAGAT and the Sport Up promotion team decided to host close to Taddy BLAZUSIAK (PL – TM) home town. The Tauron Arena, with its capacity of about 12,000 seats, was opened in May 2014 and has seen many top level events in several sports including Volleyball and Handball… It has also became a very happy hunting ground for the six-time SuperEnduro Champ, BLAZUSIAK, who remains unbeaten on Tauron’s turf!

Krakow, the second largest city in the country, is located in southern Poland. It remains for many the scientific and cultural centre of the country with its traditions and history of over 1000 years. It is also home to the Jagiellonian University which is the second oldest university in Central Europe.

With entry lists bursting at the seams with talent in the two major categories as well as in the European Cup, we expect the atmosphere in the Tauron Arena to be electric on Saturday night! Helped, of course, by the home favourite himself, Taddy BLAZUSIAK. Poland should be the perfect opener to an intense and thrilling SuperEnduro season!

This season again, the list of favourites for the title is long! Indeed, they are no less than five riders clearly ready to win the world crown. Of course, reigning Champion Cody WEBB is a favourite to retain his title, but he will have to be at his absolute best to see off an ever growing list of talented competitors.
Starting with his great rival of last season, Taddy BLAZUSIAK. Last year, upon his return to competition, the Pole proved that he had lost none of his fire or his talent. Indeed, a very unlucky rear suspension failure was the only thing which stopped the popular Pole from clinching his 7th crown. So “King Taddy” will work hard to achieve the top spot in 2019…
We also need to watch Billy BOLT, 2018 Vice-World Champion in his rookie season. The Brit is still young and has made steady progress over the last year. His potential is quite formidable and he could fight for the title in his second season.
Without forgetting Colton HAAKER! The double World Champion, disappointing last season with only fifth place, seems to have found his mojo on the other side of the Atlantic by pocketing the AMA Endurocross Champion title ahead of none other than Cody WEBB! His aggressive and spectacular riding style should add a little more spice and keep the crowd on their toes.
Finally, Alfredo GOMEZ (E – Husqvarna) is keen to come back strong. A nasty knee injury after Round 3 in Malaga ruled him out last year, but the 2017 Vice World Champion will certainly want to prove that he is fully recovered and ready to fight with the leaders again.
Behind this quintet, we’ll follow the progress of the promising youngsters Blake GUTZEIT (RSA – Husqvarna), Eemil JUSZCZAK (PL – KTM) and Kevin GALLAS (D – Husqvarna) who represent the future of the discipline.
Keep an eye on outsiders such as Pol TARRES (E – Husqvarna), Diogo VIEIRA (P – Yamaha), Jose Maria JUAN BERNABEU (E – Sherco) and Xavi LEON (E – Husqvarna) who have already proved their worth in this Championship and could spring a surprise.

Junior: Who’ll Take Over from GALLAS?

After a 2018 season dominated masterfully by Kevin GALLAS, 2019 seems more open and difficult. In fact, it’s hard even to say who the real favourites are even though some of the riders are already known talents.
The 2018 European Champion, Tim APOLLE (D – Husqvarna) could well be very strong, but so too could Oskar KACZMARCZYK (PL – KTM), Diego HERRERA (CL – TM), Norbert Levente JOSZA (RO – Husqvarna), Teodor KABAKCHIEV (BG – KTM) and Lee SEALEY (GB – Yamaha). Adrien JACON (F – KTM), David CYPRIAN (CZ – KTM) and Andris GRINFELDS (LVA – KTM) will also be waiting in the wings.
It will also be necessary to keep an eye on the young British talent Dan MUNDELL (Sherco), fresh from top results in EnduroGP and a trip to America where he tried out some similar indoor racing.
There will also be a strong contingent of Austrian riders with Michael UNTERKIRCHNER (KTM), Sebastian ENÖCKL (KTM), Kilian ZIERER (KTM) and Florian KIRCHMAYER (Sherco) and the presence of a Lithuanian rider, Dziugas KAZAKEVICIUS (Sherco)…

The 2019 Maxxis FIM SuperEnduro World Championship promises to be a season full of thrills and spills. WEBB will have a lot of competition and his rivalry with BLAZUSIAK, BOLT and HAAKER could take on another dimension!

See you on Saturday 8 December at the Tauron Arena in Krakow (Poland) from 16:00 where the stars of the SEWC will meet you for a night of suspense, breathtaking races, and a huge show. Esepcially as the local hero, Taddy BLAZUSIAK, intends to remain undefeated on his home turf!

If you do not have the chance to be there, visit www.enduro-tv.com from 19.00 to follow this first round Live on our EnduroTV channel!