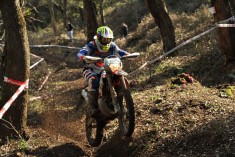 Nicolas Pellegrinelli from Italy won the Overall of the first day at the season-opener of the Enduro-European Championship in Donoratico (Italy). Last year Pellegrinelli lost the Junior title after an injury at the last race and now he is back, stronger than ever: “With the KTM 250 2-stroke I’ve found the right bike for me”, said the 22 year old rider after the race.
Second in the overall was another junior too: with the same kind of bike the Brit Brad Freeman finished at the second place with only 34 seconds of delay.
The well known rider Maurizio Micheluz finished third in the overall: the Italian was already several times E1-Champion and Overall-Winner in the past. Now in the E3 class he is riding a double as big Husqvarna as used before.
The reigning champion Tom Sagar from England was only sixth in the season opener: “I have to get used to my new bike – I never drove a Sherco in the years before. But I will do better race by race!”
Despite heavy rain the week before, the track was ridable, but the stones and rocks made it very demanding and strenuous.
At the second day the complete track will be reversed – and all the lines and trails will fit no longer.
The E1-class was won by the Italian Guido Conforti in front of the German Andi Beier and the Swiss Jonathan Rosse.
In the E2-class the French Romain Dumontier gained the victory in front of the reigning champion Tom Sagar and the German Marco Neubert.
The Italian Maurizio Micheluz won in his new E3-class ahead of his compatriot Nicoli Mori and Rannar Uusna from Estonia.
Veteran Werner Müller from Austria rode for the first time since 2000 a 2-stroke motorcycle to the victory – it was the 70th time he won a day in his respective class in all the years of riding the European championship.
The live-timing of tomorrow’s race will be at the following link:
http://live.italianoenduro.com/enduro/indexweb.asp?g=45&d=2&y=2016