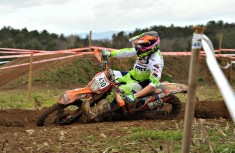 On the second day of the Enduro European Championship in Brioude (France) the overall was won by French rider Antoine Basset on his KTM in front of the Brit Brad Freeman. Freeman was leading in the overall up to the last special test: “I hit a tree with my shoulder and crashed,” stated the junior rider, who however won the Junior-E1-class and keeps the overall lead in the championship.
Contrarily to Day1, there were less Junior riders at the top of the overall: Freeman was the only one up to the sixth place, where we can find his classmate Nicolas Pellegrinelli.
Third place in the overall for Czech Jaromir Romancik ahead of the reigning champion Tom Sagar and of Romain Dumontier, and this is also the podium of E2-class.
Guest starter Jérémy Carpentier from France won the E1-class. The Junior champion of last year finished in front of Swiss Jonathan Rosse and of Romain Boucardey from France.
With Quentin Delhaye de Maulde, Anthony Geslin and David Abgrall, France had its full podium in the Junior-E1-class. Behind them, Theo Bolley and Jeremy Miroir from France, too. But the leader of the class remains Patrick Markvart from Czech Republic.
The Brit Jane Daniels seized her fourth victory in a row in the women class. She won again with some minutes of advantage on her rivals, confirming herself at the top of the series.
In the Veteran class the reigning champion Werner Müller could not start his motorcycle in the morning and could not repair it, either. So the Austrian had to give way to Sebastian Krywult from Poland, who won and took the lead in the championship.