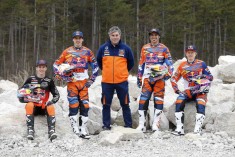 Pit Beirer (Motorsport Director): “We are very happy to continue the long tradition with the Farioli family, which began more than 50 years ago with Arnaldo Farioli and was continued by his son Fabio in 1993 after winning the World Championship title. Then, ten years ago, Fabio fully took over the leadership of the KTM Enduro division and has since then created several multi-time champions. Since the Enduro sport is changing, his range of tasks are changing as well, but we feel confident that he and his team will continue to provide stability and success for the team. We have full confidence in his qualities as a Team Manager and have great regard for him as a friend of the Orange Family.”

The KTM Enduro Factory Racing Team is competing with the two multi-time world champions Christophe Nambotin and Ivan Cervantes and is further reinforced by the two world championship rookies Taylor Robert (E2) and Nathan Watson (E1). After a difficult season plagued with injuries, Nambotin has an eye on his last missing title in the E2 class aboard his new KTM 350 EXC-F. After gaining some experience in Rally racing, Cervantes is riding the 2017 KTM 250 EXC-F in the E1 class wanting to draw on his first Enduro World Championship wins in 2005 and 2006.