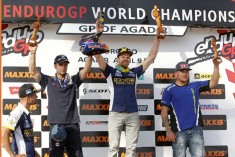 “This is a great start to the championship,” commented BELLINO. “The day was tough – the terrain was dry but very slippery, it was very easy to make mistakes. But for me everything went well. I felt good. It was important to be consistent all day, and I managed to do that. I’m looking forward to day two now, which I know will be hard.” Throughout the day riders battled against extremely dry and dusty conditions, with the rock littered Moroccan terrain ensuring a demanding day’s racing for all competitors.

Comfortably finishing at the head of the EnduroGP class, BELLINO claimed three special tests wins including two class topping performances on the long and demanding Enduro test. Fastest out of the blocks was former Enduro 3 World Champion Matt PHILLIPS. Recording winning times on each of the three special tests on the opening lap, despite dropping from the top spot PHILLIPS nevertheless put in a solid performance.

Switching to two-stroke machinery for 2016, Johnny AUBERT (Beta) enjoyed a stunning return to form. Despite struggling a little on the short and technical Extreme test, he proved to be both fast and consistent on the Enduro and Motocross tests. Third behind BELLINO and PHILLIPS with just one special tests remaining, the former two-time Enduro 2 World Champion gave the day’s closing motocross test his absolute all to earn the EnduroGP runner-up result.

In the Enduro1 category it was defending class champion Eero REMES (TM) who topped the results – placing close to eight seconds ahead of Jamie MCCANNEY (Yamaha). With REMES winning four of the day’s special test in the Enduro 1 class,MCCANNEY made a strong showing in his first EWC race out of the Enduro Junior class to place as runner-up. Third in Enduro1 went to recent enduro convert Nathan WATSON (KTM), who posted the class’s fastest time on each of the three motocross tests. Victor GUERRERO (KTM), Gianluca MARTINI (Kawasaki) and Danny MCCANNEY (Husqvarna)placed fourth, fifth and sixth respectively.

As the overall EnduroGP winner, Mathias BELLINO also placed at the top of the Enduro2 results. Finishing 27 seconds ahead of Matt PHILLIPS, the Frenchman topped five of the day’s tests in the E2 class.  A further 10 seconds back Alex SALVINI just edged out Taylor ROBERT. After 53 minutes of racing the pair were separated by just 0.21 of a second, with a mistake in the final corner of the day’s last special test denying Taylor a chance of the runner-up spot. Yamaha duo Loic LARRIEU and Cristobal GUERRERO placed fifth and sixth. Christophe NAMBOTIN’s 2016 championship aspirations took a turn for the worse early on day two when the former world champion crashed on the Enduro test. Injuring his hand,Nambo’ battled his way to the end of the day in notable discomfort and with a serious amount of swelling.

Johnny AUBERT was unquestionably one of the day’s big winners – his Enduro3 class topping result signalling an important return to form for the Frenchman. But it was AUBERT’s younger Beta team-mate Steve HOLCOMBE who lead the E3 class early on day one, before a mistake from the Brit and an impressive turn of speed during the final lap saw AUBERT finish 15 seconds ahead. Third went to Frenchman Antoine BASSET with Italian Manuel MONNI (TM) fourth and Spain’s Jaume BETRIU (KTM) fifth.

In the Enduro Junior class it was Italy’s Giacomo REDONDI who topped the results, finishing 12 seconds clear of his closest challenger. Making a strong start to the day the 2015 Enduro Junior class runner-up remained at the head of the class before taking the win. Spain’s Josep GARCIA (Husqvarna) performed well in his first race out of the youth class, placing a comfortable second. Third went to Sherco mounted Kirian MIRABET.

Just two seconds separated the top two riders in the Enduro Youth class with Jack EDMONDSON (KTM) claiming the win ahead of France’s Jean-Baptiste NICOLOT (Yamaha). The two riders traded special test wins throughout the day to place more than one-minute ahead of Valerian DEBAUD (Yamaha).