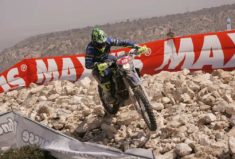 More than one month after a very muddy Grand Prix Polisport of Portugal, EnduroGP is back in action this weekend for the third round of the season in Grevena, a small town in northern Greece…

After, Kastoria, Kalambaka (twice) and Serres, the AMOTOE (Greek Federation) and its president Stelios KORELIS wanted to renew the host city. In the end, it’s the charming little town of Grevena, in the outskirts of West Macedonia that was chosen to host this Grand Prix Maxxis of Greece.
As so often, the AMOTOE will build on the experience of Dimitris ATHANASOULOPOULOS and all his staff of the Off-Road team to make this event a great success, supported by local bikers led by Vassilis SIAFARIKAS…

So, it is Dimitris ATHANASOULOPOULOS aka “Doc” who had the difficult task of creating a course worthy of a World Championship round in the region of Grevena.
“Grevena and its surroundings are really conducive to the practice of Enduro. Even if I didn’t know the place, it was not difficult for me to make a loop of 65 kilometers around the city,” told ATHANASOULOPOULOS. “The paddock is located in the centre of Grevena and we think it is appropriate to build the Friday night Super Test next to it. The course will leave the paddock and take the direction of the Maxxis Cross Test which is about 6 kilometers from Grevena. Then we’ll go directly to the Technomousse Xtreme Test located in the same place than the CT to finally finish with the Enduro Test in Kalamitsi for a real typical Greek Enduro test! There will be two Time Checks with service – one between the Cross and the Xtreme tests and then one in the paddock. Riders also should love the terrain in the transfers.”

Grevena is a town of Greek West Macedonia with about 13,000 inhabitants. This small city of northern Greece is 180 km from Thessaloniki. It’s area full of natural treasures with beautiful mountain scenery but also the green Venetikos river and especially the Pindus National Park also known as Valia Calda,. This Natural Park is one of the finest in Greece and it is also one of three places in the Hellene country where you can see bears in the wild. We could also see some rain, and eventually thunderstorms, during this Grand Prix Maxxis of Greece.

Phillips In Charge
Youth power! After two Grand Prix, the EnduroGP category is dominated by three riders under 26 years old: Matthew PHILLIPS (AUS), Mathias BELLINO (F – Husqvarna) and Steve HOLCOMBE (GB – Beta). PHILLIPS has been on top form this season, delivering Sherco an early grasp of the EnduroGP leader’s plate. But he can’t afford to relax with both HOLCOMBE and BELLINO just five points behind. Easily one of the revelations of the 2016 series, HOLCOMBE – a senior class rookie – appears to be getting stronger and stronger with every round. Struggling in the mud of Gouveia (Portugal), BELLINO looks to make amends in Greece. His goal is to win back the EnduroGP leader’s plate he held in Morocco.

Behind this trio and Eero REMES (SF – TM) remains threatening. With two podium results to his credit, he’s proven the speed is there to challenge for EnduroGP honours, however, poor results on the opening days of racing in both Morocco and Portugal have put him 13 points behind both HOLCOMBE and BELLINO. Six points behind REMES and Italy’s Alex SALVINI (Beta) has yet to find his groove in EnduroGP as he settles into his new team awning for 2016. But with an impressive victory at the recent round of the Italian Enduro Championship, SALVINI will be hoping to transfer that momentum across to the world scene in Greece.

Edging ever closer to his debut EnduroGP podium, KTM’s Taylor ROBERT (USA) is proving a fast learner as he continues his rookie season in the world championship. A pair of fourth place results in Portugal lifts the American to sixth overall in the classifications. Currently seventh in the provisional standings, Antoine BASSET (F – KTM) will want to confirm his excellent results of the early season. Nathan WATSON (GB-KTM) is another rookie turning heads in 2016. Rapidly improving to place third in the horrendously wet conditions in Portugal bumps him up to eighth overall.

Despite finishing second overall on day one in Morocco, Frenchman Johnny AUBERT (Beta) picked up an elbow injury in Portugal that prevented him from scoring points on day two. Behind AUBERT in ninth, Gianluca MARTINI (I – Kawasaki), Jaume BETRIU (ESP – KTM), Loïc LARRIEU (F – Yamaha), Cristobal GUERRERO (E – Yamaha), Jamie MCCANNEY (GB – Yamaha) and Manuel MONNI (I – TM) will feature strongly in Greece.
We also expect a return to the forefront of Ivan CERVANTES (E -KTM) – who has not scored any points in the EnduroGP standings. And it is the same for Luis CORREIA (P – Beta), Danny MCCANNEY (GB – Husqvarna) and Jonathan BARRAGAN (E – Gas Gas)…

Can anyone stop REDONDI?
In Junior Class, Diogo VENTURA (P – Gas Gas) Kirian MIRABET (E), Josep GARCIA (E – Husqvarna) and Albin ELOWSON (S – Husqvarna) will have to raise their game if they want to stay in the race for the title with leader Giacomo REDONDI (I-Honda). Indeed, during this early season, the category is under the total control of REDONDI. The Italian remains unbeaten, with nobody seemingly able to worry him. His nearest rival, VENTURA, is already 24 points behind. In addition to these five riders, we will be happy to see the Finn Henric STIGELL (TM), currently sixth, Oliver NELSON (S – TM), Mika BARNES (FIN – KTM) and French David ABGRALL (Yamaha) and Anthony GESLIN (Yamaha). In contrast, we expect more from Davide SORECA (I – Honda), presented as a potential preseason favourite. Note that Jeremy CARPENTIER (F – Honda) will not be in Greece due to his leg injury sustained in Portugal.

Finally, in the FIM Youth Cup 125cc, this Grand Prix Maxxis of Greece should offer us an intense battle between headliners Jean-Baptiste NICOLOT (F – Yamaha), current leader of the class, Valerian DEBAUD (F – Yamaha), Erik APPELQVIST (S – Yamaha) and Lee SEALEY (GB – Yamaha). Absent in Portugal, Jack EDMONDSON (GB – KTM) will be back in business. The former point’s leader will be intent on reestablishing his dominance in Greece. Italian prospect Mirko SPANDRE (KTM) will look to get in the mix, while we will take pleasure in welcoming Chilean Ruy BARBOSA (Husqvarna) to the world stage.

This Grand Prix Maxxis of Greece will therefore offer an authentic place to the stars of EnduroGP. No doubt thousands of Greek fans will line the different special tests to cheer for the elite of the World Enduro series to make of this third round of the season a big party.