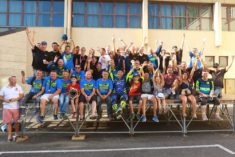 Just days after the paddock saw the double crowning of Matthew PHILLIPS (AUS – Sherco) in EnduroGP and E2, we look back on an emotional AMV Grand Prix of France..

Paying Tribute
Moments after the closing ceremony of the 2016 Maxxis FIM EnduroGP World Championship, some of the top stars of the sport (Matthew PHILLIPS, Laia SANZ, Johnny AUBERT and Mathias BELLINO) went to visit all the volunteers from the Cahors Trials Club… just as the dedicated crew were about to celebrate the end of the Grand Prix over a meal, the stars of the EnduroGP rewarded them with a surprise meeting – and each rider gave a speech heaping praise on the club for their work throughout the week!
A wonderful reward for the motorcycle club who put in so much effort to make this final round one of the best in history, despite many added difficulties.

Rookie of the Year

There were four riders this season who were all eligible for ‘Rookie of the Year’ honors: Davide GUARNERI (I – Honda),Taylor ROBERT (USA – KTM), Pascal RAUCHENECKER (AUT – Husqvarna) and Nathan WATSON (GB – KTM). But despite impressive progress during the course of the season, neither the Italian or the Austrian could compete with the two factory KTM riders. At the end of the eight Grand Prix it was finally decided that Nathan WATSON would be crowned Rookie of the Year, with a final placing of fifth position in EnduroGP and runner up in E1 (5 wins). This 2016 season bodes well for the future of Christophe MEYER’s protégé. And at just 22 years old, Nathan has plenty of time to progress even further. He has already joined the MCCANNEY brothers and HOLCOMBE in the ‘Most Promising Brits’ group!

On Friday afternoon, just hours before the Super Test, Alexandre KOWALSKI and Marc BOURGEOIS organized a Press Conference. In this, they presented their goals for 2017 and the new WRF 450 Limited Edition Race Replica – on sale only in France. Brice LESAGE, from clothing brand and main sponsor Outsiders, also presented the new collection of team gear. These new outfits were worn by Loïc LARRIEU (F) and Cristobal GUERRERO (E) on the Sunday and will be the official colours of the team next year. Meanwhile, Honda RedMoto also used the final round to allow fans to discover its brand new CR-F 450 on Saturday evening.

If there is one thing in which Didier VALADE excels, it is in putting on a spectacular show. Indeed, the long-time organiser of the Urban Trial of Cahors decided to make the AMV Grand Prix of France as big as possible, offering much more than just the race for the huge mass of spectators this weekend in Cahors. A trials, cycle and ATV show along with a DJ and fireworks on Friday night, and a Monster Trials display during the weekend in Auzole (site of the Maxxis Cross Test and theEnduro Test) to keep the fans entertained between laps. And finally, a concert on Saturday night in the Place Charles de Gaulle. The Trials Club Cahors and Didier VALADE made the weekend of 9, 10 and 11 September a real celebration of Enduro and all that makes it so special – the public responded by enjoying themselves and creating a superb atmosphere!

Privateer of the Year 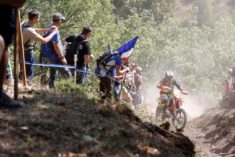 From the very first Grand Prix of the season, all eyes were on one privateer who was achieving incredible results despite his limited resources. On Sunday evening at the closing ceremony, Antoine BASSET (F – KTM) was awarded with a trophy forBest Privateer! When he was called to the stage, the whole room rose to a standing ovation. Rapturous applause for the rider who competed at every race of the season with just his red van and friends or family members filling the role of mechanic at each GP. The Frenchman confessed afterwards that the award and reception had given him “chills and brought tears to my eyes”. He was an amazing 4th in E3 (10 podiums) and 11th in EnduroGP. BASSET has always kept smiling throughout the year and we now hope to see a factory team reward him for all his hard work and professionalism.

Although Sherco’s Matthew PHILLIPS was crowned the fastest rider in EnduroGP, it was Beta which won the constructors’ title! Steve HOLCOMBE took top honors in E3 and team-mates Alex SALVINI (I) and Johnny AUBERT (F) were always ready to back up the Brit throughout the year. The Italian brand is now the top manufacturer in EnduroGP, finishing 20 points ahead of KTM. Note that Sherco finished 3rd and TM were 4th.

The Trials Club of Cahors had to strengthen its security in the paddock and the Super Test due to a State of Emergency issued across the whole of France following the recent terror attacks. The public had access to everything as usual and did not have to pay to see any of the racing, although security checks were enforced at each entry into the paddock – a very unusual sight in Enduro. But the safety measures did not stop thousands of enthusiastic spectators eager to watch the Super Test. And the paddock was full each evening when the race was over, this was made clear with a huge crowd at the autograph session on Saturday evening…

This season, ABC Communication decided to award a prize to the friendliest rider in the paddock, the one who was most available for interviews, and the one who was most inclined to cooperate with the demands of sponsors, the media, and all the other requests faced off the bike during a race weekend. Although there were many candidates, such as Steve HOLCOMBE (GB – Beta), Ivan CERVANTES and Matthew PHILLIPS, it was finally decided that Taylor ROBERT would be honored with this award. Always smiling, the American has never refused a request from the organizers or the promoters, and has even entertained the paddock with a free stunt show during some Grand Prix! 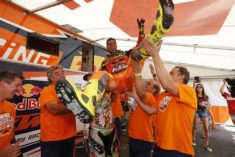 It was announced that the AMV Grand Prix of France 2016 would be the last in the long and successful career of Ivan CERVANTES (ESP – KTM), the Spaniard opting to race in rallies from now on. This departure created a different atmosphere from the other final rounds, with French fans displaying a banner in tribute to the Quadruple World Champion. The spectators were behind the Spaniard just as much as they were for the strong contingent of French riders. “El Torito”, we felt, answered their support by dancing with his bike for one last “bullfight” at the start line on Sunday morning. Returning to Parc Ferme at the end of the final day, the Spaniard received a tribute from the entire KTM family, and ABC Communication also paid tribute by making a nice video for him which was broadcast in the evening at the closing ceremony. Soon you’ll have the opportunity to enjoy it on our Youtube page “EnduroGP“.