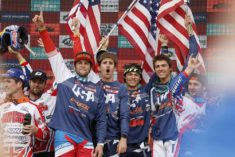 The final day motocross races saw close action in all classes, with all of the category leaders making it to the end of the event without any problems. Led by Taylor Robert – KTM the USA World Trophy team put the finishing touches to their impressive week-long performance to secure a well-deserved World Trophy team win. With the likes of Australia and Italy failing to get all four of their team riders to the finish Great Britain claimed the final runner-up result with the Czech Republic claiming third and with it the Watling Trophy for the most improved nation. Sweden ended up fourth with Estonia fifth.

“I’ve been so stressed the last few days, this is a huge deal for me and for the USA,” commented a delighted Taylor Robert – KTM “I kept trying to tell myself that everything would work out, but I know anything can happen during the final motos. This is my sixth ISDE and it feels so good to have won with team USA and also to have got the overall individual result. My final moto went well, I got a good start and quickly worked my way into the lead. Then half an hour after my race was over was the worst because I was waiting for a phone call to tell me how Daniel Sanders got on, to find out if I’d got the overall. The team’s been great, we’ve been getting closer and closer to this year-on-year. This one’s for Kurt Caselli.”

With just twenty-two seconds separating the USA from Junior World Trophy class leaders Sweden at the start of day six everything was to play for. But with each of their three team riders performing well in their respective final motocross races Sweden extended their lead to forty-five seconds and with it claimed the 2016 Junior World Trophy team win. With the USA in second Italy placed third with Finland fourth and France fifth.

Not expected to do anything other than win, Australia’s women showed exactly why they are the nation to beat in the Women’s World trophy class as each of their three riders safely reached the end of their motocross races to claim a fourth class win in as many years. Host nation Spain held on to the runner-up result with Germany third.

Taylor Robert – KTM rounded out a near perfect week with a controlled win in his motocross race, finishing ahead of Jaromir Romanick – KTM with Denny Philippaerts – Beta third. Comfortably topping the Enduro 2 class overall result Robert placed ahead of countryman Kailub Russell – KTM with Jamie McCanney – Yamaha rounding out the top three.

The first ever FIM Vintage Trophy was won by America’s Fred Hoess – Husqvarna.