After six riding-days in the Enduro-European-Championship, the final will be held on Friday, 28th of October, and Saturday, 29th of October.
The place to be is in Harfsen, in the east of the Netherlands, where the organizing motoclub was perfect prepared.
For the riders there are three laps to go, each with four different special test, all together about 20 km a round. Attention, the Netherlands are not only with sandy tracks, most of the test will take place at the forests with many roots. The very first cross-test is directly at the paddock, easy to watch for all the teams and spectators.

Both days the competitors will make three laps and collect more than 250 km offroad.
So far, no champion has been crowned in any class:

In the overall there is the young british rider Brad Freeman in the leed, though he missed one race for an injury. But now the KTM-rider is back again and want to fight for the titel.

His rival will be the Czech Jaromir Romancik, who had won the last two races – and had just took the third place in the team-worldchampionship (ISDE) in Spain two weeks ago.

The Italien Nicolas Pellegrinelli must also be traded as a hot candidate: He could already have taken the lead by his fast riding – if he had not lost the control at a time-check.

The overall champion will not only win the title, but also an individual designed helmet from sponsor Airoh.

In addition to the championships in the individual classes, there will be a competition for the nations too: The riders will not only fight for their own, but also for the nations ranking. 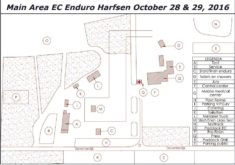 The opening ceremony, as well as driver and team presentation, take place on Thursday evening inside the big party tent on the ground.

Starting time on Friday and Saturday is 8:30 am in the morning and on Saturday evening there will be the price-giving-cermony in the party tent. After that there will take place the big celebration-party, the after-season-celebration with live musik from a band.

A good opportunity to say goodbye to the season, because the next day is a long Sunday.