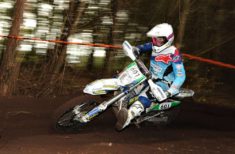 Already at the first day of the final of the European-Enduro-Championship in Harfsen/Netherland the first Champions where crowned:
The Italian Maurizio Micheluz defended his title in the E3-class: With the big 4-stroke-Husqvarna nobody can reach him any more in the championship. „But in the narrow sections, between the many trees, sometimes the power feels much to much.“

Sebastian Krywult from Poland won the championship in the veteran-class with an other victory oft he day. That Poland took Krywolt to the trophy-team at the sixdays two weeks ago, shows how strong the 40 year “old” man is.

Compleatly unbeaten Jane Daniels took the titel in the women-class The Husqvarna-rider from England was able to defeet the strong Netherlands on their own, special terrain.

Even the day win in the overall from Brad Freeman could not prevent the titels: The Brit took the victory with zwo and a half minute lead in front of the other juniors Patrik Markvart from Czech and Jesper Börjesson from Sweden.

Behind them the first senior, the German Marco Neubert. After the technical failure from the reigning overall- and E2-class champion Tom Sagar from England, Neubert is fighting with the Czech Jaromir Romancik for the championship in the E2-Class.

With 90 km a lap and four tests in every of the three rounds, the times in the special-tests grow up to more than one hour and 24 minutes to the best – and nearly two hours to the slowest riders in the championship.