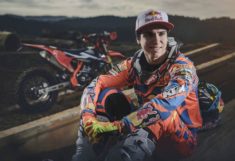 The first month of the off-season was rather calm in the transfer market. But since the end of the ISDE and the annual motorcycle show in Milan (EICMA), the rider market seems to be on fire! To add to this, the KTM Factory Racing team has just completed its line-up… without Taylor ROBERT (USA)!

After his extremely impressive end to the 2016 season, everyone expected to see the American in EnduroGP in 2017. But it wasn’t to be; with KTM eager to distinguish between their European American presence.
To replace ROBERT and Ivan CERVANTES (E), Fabio FARIOLI has decided to enlist Daniel SANDERS, a great Australian hopeful (22 years) who first created a stir with his speed at the 2015 Six Days in Slovakia. They have also signed the talented little protege of “El Torito”, Josep GARCIA!

To the surprise of everyone in the paddock, GARCIA moves from Husqvarna to KTM and will even change category! Indeed, the young Catalan, who turned 20 last December, will line-up with the 250 4-stroke in Enduro 2.
Daniel “Chucky” SANDERS had a slightly lack-luster first World Enduro appearance at the season finale in Réquista (France) in 2015 – where he rode with a 250cc 4T. But after showing a keen interest in World Enduro for the last few years, the Aussie has finally made the leap into EnduroGP and will also compete in E2… on a 250cc 2T?

Fabio FARIOLI and the KTM Factory have provided us with two surprises during this off-season, letting Taylor ROBERT return to his native Arizona and signing two promising youngsters for 2017. With NAMBOTIN and WATSON in EnduroGP, KTM make their intentions known and clearly aim to return to the top step of the world’s most prestigious stage. And with SANDERS and GARCIA, the Austrian firm is focusing on youth to shine in the “smallest category”… A promising team for a manager in search of emphatic comeback!