With just over a week until the opening round of the new EnduroGP season, it is time for us to take a look at the main protagonists. This time we’re looking at the brand new 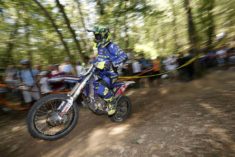 Matthew PHILLIPS (AUS – Sherco): Very consistent last year, the very first EnduroGP World Champion in history impressed by quickly mastering his Sherco Factory bike. For 2017, the objective will be simple; to defend his title at all costs despite some incredibly strong competition! While we don’t know how the Tasmanian will fare in conditions like those we will experience in Finland, he will no doubt be a formidable contender throughout the nine Grand Prix that will make up this season!

Contenders for the Crown

Mathias BELLINO (F – Husqvarna): In spite of a couple of poor results in Portugal and Greece at the beginning of 2016, the 2015 E3 World Champion still finished runner-up in EnduroGP last year. Although he previously struggled in difficult weather conditions, the French rider has worked hard on this during the winter at home, and in Finland. Back on the 300, BELLINO will have no other goal than the supreme title!

Steve HOLCOMBE (GB – Beta): E3 World Champion and 3rd in EnduroGP for his first season in Senior, the Brit was extremely impressive in 2016. This new season should be a year of confirmation for the ever-smiling Beta rider who will aim to enjoy every moment on his 300RR 2-stroke. Even if he is not the type to announce that he is aiming for the title, EnduroGP followers know very well that his talent and his technique will allow him to fight at the very top and becoming a serious challenger!

Nathan WATSON (GB – KTM): 2016 ‘Rookie of the Year’, WATSON finished in the Top 5 in EnduroGP for his first year in Enduro after coming from Motocross. He has already been on winning form this year when he took the overall victory at the opening round of the Italian Championship – the race was held on his favourite terrain, sand! And was also run in the same format as the forthcoming British GP (Enduro Sprint Saturday + GNCC Sunday). The happy-go-lucky blond is a quick learner, especially with the guidance of Christophe MEYER, and WATSON is already established as one of the great favorites for the world crown!

Loïc LARRIEU (F – Yamaha): For his first season with Yamaha, LARRIEU achieved excellent results with no fewer than 5 podiums in the EnduroGP category, 3rd place in E2, and a title in the French Championship. For 2017, Marc BOURGEOIS and his Outsider Yamaha team will rely heavily on the talented rider from Southern France. With his Factory Yamaha bike, he has all the potential and everything he needs to fight at the front…

Christophe NAMBOTIN (F – KTM): While 2016 was a nightmare season due to a spate of injuries, it is difficult not to see NAMBOT ‘as one of the favorites of the EnduroGP category… firstly because he has finally returned to 100% fitness, and secondly because he is back on the bike that brought him to his first two world titles: the 300 EXC 2-stroke! At 33 years old, the KTM rider still has the knack and the technique to fight at the top… It remains to be seen whether he can regain the right rhythm after two seasons ruined by injuries.

Alex SALVINI (I – Beta): In 2016, his very first season with Beta, the 2013 E2 World Champion could not do better than 9th in the premier category with a single podium in EnduroGP in Gordexola, Spain. For 2017, “SALVO” will have to push hard if he wants to aim for the Top 3 but we know the rider from Bologna has fierce determination. He will always switch the 450 Beta 4-stroke for the 350 4-stroke of the same brand.

Antoine BASSET (F – Gas Gas): After an incredible 2016 season as a privateer, where he finished in the Top 10 of EnduroGP, the Frenchman finally found a Factory team with a return to Gas Gas. Unfortunately, BASSET will miss the early part of the season due to a nasty knee injury. In any case, when he returns to business, Gas Gas Factory rider will likely dice it up with some of the favorites.

Giacomo REDONDI (I – Honda): The 2016 World Junior Champion comes out of an almost perfect year (15 wins out of 16 possible) and decided to come directly into EnduroGP to rub shoulders with the best in the world. Riding with his Honda CRF 450 4-stroke he could well surprise a few people and may even find himself on the podium alongside old rivals such as Matthew PHILLIPS and Loïc LARRIEU…

Cristobal GUERRERO (E – Yamaha): The very first Enduro Junior World Champion will stay with Yamaha for 2017, but has decided to change teams… he will now run alongside his brother Victor on the Yamaha Spain Pont Grup team. At 33 years old, the Andalucian will likely only ride for a couple more seasons, but he will be giving 2017 his best shot.

Christophe CHARLIER (F – Husqvarna): With CHARLIER, the former MXGP rider, Andreas HÖLZL and the Rockstar Energy Husqvarna Factory team may seem to have taken a gamble. But the Corsican has trained all winter to be ready for his first year on the handlebar of the FE 350, including some impressive performances in the Italian Championship… if he can learn quickly; the Husqvarna rider could surprise us in the style of Nathan WATSON last year!

Deny PHILIPPAERTS (I – Beta) who, for his 7th year of Enduro, will certainly seek a place in the Top 15 in this ultra-competitive class…

Jaume BETRIU (E – KTM) who could be one of the big surprises and who clearly intends to take a place among the 10 fastest riders on the planet.

Tommaso MONTANARI (I – Beta) who arrives at Beta Boano and will continue to learn the discipline while having fun.