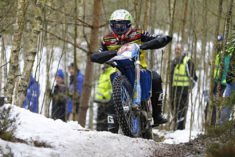 Finland’s Eero Remes (TM) has dominated the opening day of the FIM Maxxis EnduroGP World Championship, blitzing the Enduro 2 class to finish more than two minutes ahead of countryman Henric Stigell (Husqvarna) as well as posting the day’s overall fastest time. Former world championship regular Antti Hellsten (Husqvarna) battled his way to the top of the EnduroGP class, placing close to one-and-a-half minutes ahead of Marko Tarkkala (Husqvarna). In the Enduro Junior and Enduro Youth classes Eemil Pohjola (Husqvarna) and Hugo Svärd (Husqvarna) ensured yet more Finnish victories. It was TM mounted Remes who stole the show on day one of the GP of Finland. Expected to be among the riders to beat, he didn’t disappoint and set a pace few could match from the very first special test. “It was a great day for me, racing in front of so many Finnish fans was amazing,” explained a clearly pleased Remes at the end of the day. “The first tests were the best for me. The ground was frozen hard, the spiked tyres really gave me a lot of grip – those early tests set me up for a great day.”

As expected day one was long, tiring and challenging for all riders with a minimum of three hours of special test racing for all. Despite sub-zero temperatures during the start of the day, no snow fell with the fastest riders making it back to the paddock just before dark following more than 11 hours of riding.

At the top of the EnduroGP results it was Antti Hellsten (Husqvarna) who claimed the win, leading home a trio of Finnish riders. Well used to racing in winter conditions, Hellsten made a strong start to the day before improving during the afternoon. “I felt good all day but it was after the mid-day service that I upped my pace,” confirmed Hellsten. “I kind of re-started my day and found a little speed that I wasn’t able to find at the start. I pushed harder and got to the top of the results.” Behind Hellsten was another former world championship regular – Marko Tarkkala (Husqvarna). Making a one-off EnduroGP outing the burly Finn remained consistently fast throughout the day, enjoying being back in the world championship and racing at home. Third in EnduroGP went to another Finn – Aleksi Jukola (KTM). The first non-Finn in EnduroGP was Matthew Phillips (Sherco). Despite a big crash three tests from home the Tasmanian kept himself ahead of his nearest challenger, Steve Holcombe (Beta). “I thought I’d been cold before, but today was the coldest I’ve ever been,” said Phillips. “It was tough being one of the first riders on the tests in the morning, there was no real line to follow, so at times I was a little all over the place. Generally, the day went well.”
Another rider who found it difficult being among the first riders onto the tests was Steve Holcombe (Beta). Placing fifth in EnduroGP – the first two-stroke rider home – Steve was forced to ride half of the day’s 10th special test with no front brake having bent his front brake disk on a rock. “It was just what I didn’t need as I was starting to feel good, but that’s how it goes some times. I think both Phillips and I struggled a little in the morning but then things improved for us both. I’m happy enough with my result – there was no way I was going to catch those flying Finns.”
Rounding out the top 10 in EnduroGP was Christophe Nambotin (KTM), Loic Larrieu (Yamaha), Nathan Watson (KTM), Christophe Charlier (Husqvarna) and reigning Enduro Junior World Champion Giacomo Redondi (Honda), who crashed heavily on the penultimate test.

With Remes running away with things in Enduro 2, Henric Stigell was the only rider to get close. Although nearly three minutes behind Remes after the three hours of special test action, Stigell was impressively fast throughout the day. Pascal Rauchenecker (Husqvarna) was the fastest non-Finn in the Enduro 2 class, finishing third to deliver one of the event’s stand-out performances. “I’m more than happy with my third-place result. I worked hard to be as ready as I could for this event, and things went well. It was tough, but in some ways the long, cold road stages were the toughest. I hope I can keep going well tomorrow.”
Roni Nikander (KTM) finished just under one-minute behind Rauchenecker with Josep Garcia (KTM) fifth ahead of his team-mate Daniel Sanders (KTM) and Danny McCanney (Husqvarna) and Jamie McCanney (Yamaha).