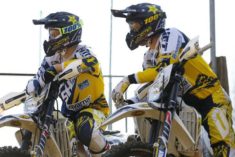 Looking to secure back-to-back wins at Erzberg having dominated the Hare Scramble in 2016 to win by some 33 minutes, Graham will again be going all out for victory. Delivering one of the all-time most dominant wins 12 months ago, Jarvis, who recently won the Minas Rider Hard Enduro Rally in Brazil, carries some of the best form of his long and distinguished career into ErzbergRodeo 2017.

The stand out rookie rider at Erzberg in 2016, Billy Bolt’s goal had been to return to Erzberg and challenge for a podium result. However, a recent foot injury has put his participation in doubt. Opting to travel to the event and ‘give it a go’ the young British rider will take to the start of Friday’s first prologue run before deciding if he is able to start the main Hare Scramble on Sunday.

Colton Haaker will make his second appearance at Erzberg having sampled the iron Giant for the first time last year. Securing both the US Endurocross and FIM SuperEnduro titles since his last visit to the event, the American is focused on reaching the finish of what is widely acknowledged as the world’s toughest one-day enduro event. The 23rd running of the Erzbergrodeo takes place in Eisenerz, Austria this weekend, with the iconic Hare Scramble event wrapping up three days of action on Sunday, June 18.

Graham Jarvis: “Erzberg’s easily the single most important hard enduro of the year so to return to Austria and the Iron Giant with the #1 plate on my TE 300 is a real honour. Last year’s race went almost perfect for me. It’s rare in a race like the Hare Scramble for that to happen. My start was decent, about top ten and then I stayed out of trouble, building on things from there. In a way that will be the same game plan again for this weekend. I’m not a fan of the early high-speed sections of the course but I know staying out of trouble there is key to keeping in touch with the leaders. I know once it gets tougher I can step things up and like always we’ll be in for a hard race. I’d love to secure a back-to-back win but the competition will be tough this year. Overall things have gone well so far this year, I won the majority of my preseason races and then won Minas Riders in Brazil. I’m riding as good as I’ve ever done and feel ready for the fight this weekend.”

Billy Bolt: “Fighting a foot injury has left me in a difficult position leading into the Erzberg this weekend. Finishing fifth overall in 2016 I wanted to return healthy and build on that result. Since joining Husqvarna we’ve worked really hard to improve my riding and I felt up until the point I hurt my foot that I was in a really good place to challenge for a top five, or better. But I don’t want to give up without a fight and will give things a shot — we’ve worked too hard not to. I’ll ride the prologue to see how things go and then build from there.”

Colton Haaker: “I’m excited to be back at Erzberg racing. My preparations have been mixed, with some great time riding and testing but hurting my shoulder was something I could have done without. But I feel like I’ve put in the hard work, so I’ll give it all I can. Knowing what to expect will certainly help me. As everyone knows Erzberg’s a crazy race where anything can happen, so I’m keeping an open mind and focusing on having some fun.”