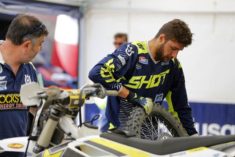 A few weeks after the Italian Grand Prix, we spoke to Rockstar Energy Husqvarna Factory Racing team’s newcomer: Christophe CHARLIER (F). The Corsican gives us his take on his switch from MX to Enduro, tells us about his first three Grand Prix, and let’s us in on his medium-term goals in EnduroGP…

Hi Christophe, Enduro fans haven’t got to know you yet, tell us about yourself…
Christophe CHARLIER: “Hello! I was very young when I started my career as a Motocrosser! In 2007 I won my first National Junior Supercross title. Then I was European MX2 Champion in 2009 before starting my career in the world series the following year.
My best season was 2013 when I finished 4th in the MX2 championship; during that year I was on the podium several times and won twice. Then I suffered a string of injuries, the first coming in 2015, where I injured my knee (cruciate ligament) despite a pole position and a podium in the Czech Republic. I was advised not to have an operation, so I continued to ride but my results suffered. The following winter I decided to finally undergo surgery, but it meant I arrived at the start of the 2016 World season in a lower physical condition. Then I broke my pelvis. Again, I continued to ride without having an operation and I scored some Top 10 results in MXGP but the injury then turned into a hernia and I had to stop, the pain was too intense! So it was after this season that I met Fabio (FARIOLI) and decided to try my luck in Enduro. “

Why did you decide to try EnduroGP after several seasons in MXGP?
C.C: “As I said, I met Fabio during the off-season. He let me do some testing and we quickly came to an agreement. I’ve followed Enduro for a very long time, it is a discipline that I really appreciate and enjoy, and there are many places where I can practice at home in Corsica. So, as soon as I had the opportunity to test factory bikes, I took it! Especially when I was offered a deal with Rockstar Husqvarna… “

After three Grand Prix, what’s your opinion of your debut?
C.C: “The first months were a bit complicated. I had great difficulty adapting to riding in the woods, judging the distances between trees and looking out for rocks. It’s not something we see in MX… but now I have a lot of fun with it. I made a lot of progress with my riding and my bike settings thanks to the advice of Christophe MEYER and Antoine MEO. In addition, riding in the Italian Championship allows me to gain experience and confidence – that’s what I need to try and fight for the win. At the very beginning of the season, from the middle of the race, I often had a dip in form – the effort exerted is totally different in Enduro than in Motocross. Now I have also improved on this point and I feel that I am faster, more consistent and more of a threat… “

The season started in Finland, so your first race was in the cold, ice, and snow. Conditions you couldn’t have dreamt of riding in?
C.C: “It’s true that I was not given an easy start in my new discipline! It was a tough Grand Prix but I think I didn’t get on too badly. It was a great experience, and in MX we were never able to ride in those conditions! Honestly, if we were to return there in the future, it would be a pleasure for me. And next time I’ll be better prepared… “

In Spoleto you were fighting for the podium on Saturday before injuring yourself on the Xtreme Test, where you were very fast. What did the weekend teach you?
C.C: “From the beginning of the day I knew I could set the fastest times through the Xtreme Test. But because I was fighting for the podium I wanted to gain a lot of advantage in the last XT, and I pushed too much, I took too much risk and I hurt myself. I learned that if you have the top time in a special test, you can win it by 3-4 seconds, you don’t need to try and win it by 6 seconds for example, because that is where you will make mistakes. Always control and manage your efforts. “

You are already close to your first podium, how much time are you giving yourself before you get a win?
C.C: “I have not really set a time limit for myself. Maybe I can get it soon if everything goes well but honestly, I do not put pressure on myself. It’s my very first year in Enduro, I’m here to learn first of all, so I’m taking it easy and trying not to force things…“

You are from Corsica, are you allowed to train on such a picturesque island?
C.C: “Living in Corsica is great; it is paradise for Enduro! At the moment we have no problems with environmentalists or even with the police. Besides, to be honest, the police come to watch the training! I have had policemen standing at the side of a special test and cheering for me, and taking photos with me afterwards! Corsica, geographically speaking, is amazing – you encounter all types of terrain. Personally, I train in Aullene, where there are two MX tracks and an Enduro special test, and I also train at my club in Ajaccio; the Racing Moto Club Corsica. I have an Enduro Test, an Xtreme, and even a Supercross track! In addition, since people know that I have switched to Enduro, I see more and more riders practicing this discipline in Corsica. “

What do you like and dislike about Enduro?
C.C: “To be frank… I like it all! And the things which I like less, I force myself to work harder so I can appreciate them too. Of course, there are things I like more than others, like the Cross Test and sometimes the Xtremes. I did not think that I would be as fast in this type of special test, but I must admit that in Spain and Italy I surprised myself; I enjoyed the Xtremes there and I was also very fast.“

Where do you see yourself in 5 years?
C.C: “In 5 years, I still see myself in Enduro… with some World Titles! Then I would really like to head to the Rallies. I would like to make a career like Meo’s for example, he did incredible things in Enduro with several titles and then went to ride in the Dakar. I’d like to complete the set – MX, Enduro and Rally. Why not try SuperEnduro too? It’s a discipline that I like, and that would really help me to improve technically for EnduroGP! ”