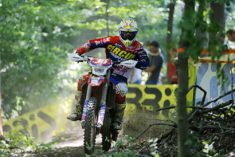 The Enduro world stars enjoyed only a few days of rest before returning to service for this fifth stage of the Maxxis FIM EnduroGP World Championship. After a Maxxis GP of Hungary full of twists and turns that saw the big return on the first step of the podium of Christophe NAMBOTIN (F – KTM), the rendezvous in Greece, more precisely in Grevena, is well known by riders last year. The Maxxis Grand Prix of Greece 2016 had indeed marked the spirits, as rain and storms had been invited to the Fiesta throughout the weekend.

On the trail in the heart of the Pindus Natural Park

Dimitris ATHANASOULOPOULOS, Enduro manager of the AMOTOE (Greek Federation), with the support of his Off Road Team, is back again in the EnduroGP adventure. As in the previous year, he has helped Yannis SIOULIS and the Grevena Moto Club to organise the Maxxis Grand Prix in Greece. Strong organisers in 2016 where they faced terrible weather, the Off Road Team and Moto Club Grevena will have the heavy task of doing as well or even better.

With a nice track of nearly 65 kilometres in the vicinity of Grevena, the riders will delight in this idyllic setting in the Pindus National Park, considered one of the most beautiful in Greece. This Maxxis Grand Prix of Greece will start Friday night with the traditional Akrapovic Super Test, which looks very technical and spectacular. After the start, HOLCOMBE, PHILLIPS, LARRIEU and others will take the direction of the Maxxis Cross Test which is located 6km from the city. They will then ride to the Technomousse Xtreme Test and then complete the lap with the KTM Enduro Test, which is a real special test that gave competitors some cold sweat last year.

Grevena, a town in northern Greece with a population of about 13,000, is 180 kilometres from Thessaloniki. In a region with many natural treasures, Grevena offers a setting with magnificent mountainous landscapes as well as the green river Venetikos and especially the Pindus National Park also known as Valia-Calda. It is home to a large number of bears.

In the EnduroGP category, last weekend’s Grand Prix of Hungary saw the return of KTM factory rider Christophe NAMBOTIN to the title race. Somewhat in difficulty during the start of the season, the Frenchman made an impeccable double at Paradfürdo and took precious points on the leader of the championship, Britishman Steve HOLCOMBE (Beta). The latter is now only 21 points ahead of Yamaha Outsiders competitors Loïc LARRIEU (F) and 26 points on NAMBOTIN. The Beta Factory rider must up his pace at the Maxxis Grand Prix of Greece if he wants to keep the #1 golden plate. Loïc LARRIEU demonstrates race after race that he is improving and is well engaged in the race for victory and title. Comfortably holding second position and consistent in his results, he’s a regular podium guy.
Matthew PHILLIPS (AUS – Sherco) had a very complicated Hungarian GP. The observers awaited him firmly after the Italian GP where a mechanical problem had forced him to give up on day 1 and to concede a large number of points to his rivals. Expect the defending champion to attack in Grevena and take back the top step of the podium.
Nathan WATSON (GB – KTM) is currently fifth in the standings and is very mature facing the experienced Alex SALVINI (I – Beta) and Cristobal GUERRERO (E – Yamaha). The Italian, DNF on Saturday in Parádfürdő, will certainly want to catch up in Grevena.
Winner of the Akrapovic Super Test in Hungary, Christophe CHARLIER (F – Husqvarna) will be absent after fracturing his hand. His teammate Mathias BELLINO (F – Husqvarna) had a smooth return to action and looks to increase the pace during this fifth GP.
Meanwhile, Ramon QUER MOLGO (E – Husqvarna) will try to confirm his more than honourable results from Hungary (9/11).
Finally, local stars Christos PAPATHEODOROU and Vasilios SIAFARIKAS will benefit from the favours of their public on their Honda.

Josep GARCIA (E – KTM), Eero REMES (FIN – TM) and Jamie MCCANNEY (GB – Yamaha) led the Hungarian GP at a sizzling pace. The battle for the Enduro 2 title is raging. This GP Maxxis of Greece promises a superb fight between this trio who are separated only by 11 points in the provisional classification.
In this fight, Pascal RAUCHENECKER (A – Husqvarna), fourth in the championship and his teammate, Danny MCCANNEY, are still looking for a result that matches their ambitions.
Daniel SANDERS (AUS – KTM), Henric STIGELL (SF – Husqvarna) and Thomas OLDRATI (I – Husqvarna) are riding strong and hope to have the opportunity to disrupt the Top 5.
Returning to the forefront in Parádfürdő, Italian Davide GUARNERI (Honda) will try to keep the same dynamic.
Jonathan BARRAGAN (E – Gas Gas) and Manuel MONNI (I – TM) will have to work hard to keep their places in the top 10. The same applies to Lorenzo SANTOLINO (E – Sherco), Rudy MORONI (I – KTM), Gianluca MARTINI (I – Suzuki), Victor GUERRERO (E – Yamaha) and Romain DUMONTIER (F – Yamaha).

British youngster Brad FREEMAN (Beta) has taken a third consecutive victory, which hampers the business of Davide SORECA (I – Honda), current leader of the Junior. Disappointing last weekend, the Italian can’t afford to rest on his laurels because FREEMAN, Mikael PERSSON (S – Yamaha) and Matteo CAVALLO (I – Beta) are strong at this mid-season. Indeed, SORECA only has a 21-point advantage over PERSSON. Kirian MIRABET (E – Sherco), Albin ELOWSON (S – Husqvarna) or Tosha SCHAREINA (E – Husqvarna) can also play the spoils in the Under 23 category.

In FIM Youth 125cc, Andrea VERONA (I – TM) seems untouchable. He secured a fifth consecutive win in Hungary and is now 51 points ahead of Hugo SVARD (SF – Husqvarna). The fight for the podium involves French Leo LE QUERE (TM) and Chilean Ruy BARBOSA (Husqvarna). Alex ISCLA (AND – KTM), victim of a heavy crash in Hungary, will be unable to compete and we wish him all the best.

The Maxxis Grand Prix of Greece is therefore a pivotal moment of the 2017 Maxxis FIM Enduro World Championship as it marks the mid-season. The stars of EnduroGP will be pleased to find Greece and the small town of Grevena for this fifth Grand Prix of the season where the organisers have planned a high quality event.