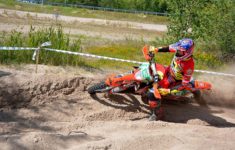 Today the second day of the Enduro European Championship Round 2 was held in Paikuse, Estonia and the overall victory was taken by the young Italian rider Matteo Pavoni (KTM,) who also won the Junior E1 class.
The weather was very favourable for enduro riding today as well – it rained slightly at night and in the morning, most of the day was cloudy and the heat did not frighten the riders.
“I had a very good day today. I made no mistakes and had no technical problems“, Pavoni said at the finish line. “Winning is a fantastic feeling!“
The local rider from the class Senior E3 Rannar Uusna (KTM) on the other hand did not have so good a day as yesterday. He took the fifth place in his class on the second day and was 11th overall. “On the Enduro Test there was a place where I made a mark for myself that this is no place to crash – but I got stuck particularly hard just there. After two crashes in the Enduro Test I could not find the right rhythm any more,“ Uusna said. “I had one more crash so the day was not so good. At least yesterday I got some good points for the European Championship“.

The fastest time today was by Pavoni 43:30.6. The second best result in the overall classification was by the Finnish rider Lari Jukola, who was second in the Junior E1 class and was 16 seconds slower than Pavoni. The third best time belonged to Dennis Shroeter (Germany) who also won the Senior E3 class and lost 25 seconds from the overall winner.
The competition in the Senior E3 class was very close, the four fastest riders were all inside 10 seconds. The Italian Oscar Balletti  was second today as well as yesterday, and the Finn Aleksi Jukola was third.
The length of the mostly sandy track in Paikuse was 62 km and it had two Cross Tests, one Enduro Test and 2 Time Checks.
The riders, teams and the FIM Europe Jury was very pleased with the organisation of the event and the overall opinion was that European Enduro needs a variety of tracks and conditions and Paikuse was a great addition to the mix.
The homepage of the event: paikuseenduro.eu
The results:
http://www.casomeric.cz/home.php
The next round of the European Championship
will take place in Burg, Germany on August 5-6.