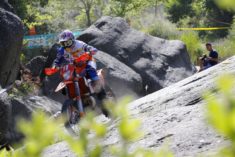 Here we go! The Grand Prix Polisport of Portugal, which looks set to be one of the most important and exciting GPs of the season. For the sixth round of the Maxxis FIM EnduroGP World Championship, and only three weeks after the tough Hungary / Greece tour, the stars of the EnduroGP series arrive in Castelo Branco, Portugal, 260km North-East from Lisbon and close to the Spanish border.

To ensure the success of this Polisport GP of Portugal, and to achieve a stage worthy of the Maxxis FIM EnduroGP World Championship, the event was entrusted to Escuderia Castelo Branco – the experienced team who have proved repeatedly that they are able to organize major sporting events. Since the 1960s, this sports association has specialized in the development of motorsports, becoming the most famous organizing club in Portugal. Known for organizing major races such as the Choice Rally, the Serra da Estrela Rally and the Castelo Branco Ramp. The Escuderia Castelo Branco was recognized as a public utility by the Portuguese Prime Minister in 1999. It is also considered as the best organizer of the National Enduro Championship but also of the National Rally Championship and the National Rallycross Championship in 2015. This Portuguese team has all the cards in hand to make the GP of Portugal a great feast of the Enduro.

Its President Antonio SEQUEIRA, its Director Helder ESTEVES, their team and the 1,500 members of the Escuderia Castelo Branco have created a stunning lap for the EnduroGP competitors.
Concentrated in the heart of the city, the special tests will undoubtedly reserve few surprises. This GP Polisport of Portugal will start on Friday at 20.00 with the always exciting Super Test Akrapovic, in the military camp of Montalvao. Then the riders will start from the Paddock on Saturday and Sunday morning at 9.00 to head to the Maxxis Cross Test, next to the Valongo football pitch. They will then join the Technomousse Xtreme Test, 2kms away and finish the lap with the KTM Enduro Test located in front of the Paddock, near the Alegro shopping center.

Castelo Branco is a very old city with more than 50,000 inhabitants, located in the heart of the Central Region of Portugal and is full of history. Its proximity to the Spanish border led to numerous invasions during the 19th century, as evidenced by the ruins of the castle that dominate the city. Today, the city has developed considerably in its southern part and is one of the largest Portuguese communes. In Castelo Branco, we’ll have to take care of the sun as the thermometer could reach 40 degrees this weekend.

Even though Steve HOLCOMBE (GB – Beta) only claimed one win during the Hungary-Greece tour, he is still sat firm at the top of the EnduroGP championship standings. In fact, the 2016 E3 World Champion is now 28 points ahead of Loïc LARRIEU (F – Yamaha) and more than 45 points ahead of the trio of Christophe NAMBOTIN (F – KTM), Nathan WATSON (GB – KTM) and Matthew PHILLIPS (AUS – Sherco). But, if he wants to maintain his championship advantage he will unquestionably need to be on top of his game in Castelo Branco.
Each of the four riders behind HOLCOMBE are, as we’ve seen, more than capable of winning. And all will be looking for the slightest error from the Brit. Each has proved during the season that they have the speed to beat the Beta rider with LARRIEU having so far shown the most consistency. PHILLIPS, NAMBOTIN and WATSON have nothing more to lose. Alex SALVINI (I – Beta) could well challenge for the podium as the Italian returns to form.
We’ll also have to keep an eye on Mathias BELLINO (F – Husqvarna), who is gradually gaining confidence after his early-season shoulder injury and hopes to be back challenging for the podium before the end of the season. Spanish rider Jaume BETRIU (E – KTM), who rode brilliantly in Greece, is another hoping to seriously challenge for a first podium in EnduroGP…
Meanwhile, Cristobal GUERRERO (E – Yamaha), Giacomo REDONDI (I – Honda RedMoto) and Deny PHILIPPAERTS (I – Beta) will be looking for strong results, just as Christophe CHARLIER (F – Husqvarna), who returns to competition following the hand injury he sustained at the GP of Hungary.

REMES hoping for a win

Struggling with a blood infection since the Italian GP, the pressure mounts on Finn Eero REMES (TM). The official TM rider is now 24 points behind Enduro 2 leader Josep GARCIA (E – KTM) and 12 points behind second placed Jamie MCCANNEY (GB – Yamaha). REMES needs a double class win this weekend in Portugal if he is to keep his world championship hopes alive.
But the task will not be easy in view of the recent performances from his two younger rivals. Indeed, GARCIA and MCCANNEY shared the victories in both Hungary and Greece and their duel seems set to continue throughout the year. The question is, can anyone step-up and match their pace and can that rider be REMES?
If REMES must absolutely grab points, he will also have to control the likes of Pascal RAUCHENECKER (A – Husqvarna) and Davide GUARNERI (I – Honda RedMoto) who have become increasingly dangerous during recent GPs.
Danny MCCANNEY (GB – Husqvarna) and Daniel SANDERS (AUS – KTM) will have to step up after a less than impressive Hungary – Greece tour, as well as Gianluca MARTINI (I – Suzuki), Victor GUERRERO (E – Yamaha), Rudy MORONI (I – KTM), Manuel MONNI (I – TM), Lorenzo SANTOLINO (E – Sherco) and Thomas OLDRATI (I – Husqvarna)…
Henric STIGELL (SF – Husqvarna) and Jonathan BARRAGAN (E – Gas Gas) have made good progress and will look to improve their rank within the top ten.

If the start of the season was to the advantage of Davide SORECA (I – Honda RedMoto), the wind turned during the last two Grand Prix as his two title rivals – Brad FREEMAN (GB – Beta) and Mikael PERSSON (S – Yamaha) – have become more and more dangerous… Only 17 and 18 points behind, the Brit and the Swede have launched a fantastic comeback, piling on the pressure to “SHOWRECA” with impressive results.
Especially since many riders such as Matteo CAVALLO (I – Beta), Kirian MIRABET (E – Sherco), Enric FRANCISCO (E – KTM), Albin ELOWSON (S – Husqvarna) and Tosha SCHAREINA (E – Husqvarna) have the means to challenge the class leaders…
This Polisport Grand Prix of Portugal can be a turning point in the Juniors category.

Finally, in the FIM Youth 125cc class Andrea VERONA (I – TM) will try to continue his impressive run of eight victories. But the Frenchman Leo LE QUERE (TM) and the Chilean Ruy BARBOSA (Husqvarna) continue to challenge, ready to pounce on the Italian…
Alonso TRIGO FERNANDEZ (E – Husqvarna), Pau TOMAS FONT (E – Husqvarna) and Hugo SVARD (SF – Husqvarna) also have the talent to battle for the podium.

This sixth Grand Prix of the season promises to be a scorcher, with racing in all classes expected to be as hot as the Portuguese weather. Renowned for organizing motorsports events, the Escuderia Castelo Branco will be pulling out all the stops from 21st to 23rd of July in order to offer to the EnduroGP stars and the Portuguese fans alike an unforgettable weekend and a great racing…