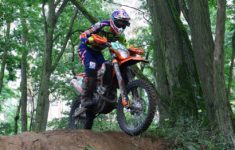 At the 5th of August 2017 the first day of the third round of European-Enduro-Championship took place in Burg / Germany (close to Magdeburg).
The over 74 km l0ng circuit was ridden three times in a row and included the three tests every round. At the end the junior-riders have had been the successfull riders in the overall result.

One reason was surely the upcoming heavely rain in the last lap, when the early started juniors have had less rain than the later coming classes.

So the Italian Mateo Pavoni won the overall ranking with his KTM in front of the Frenchman David Abgrall on the Sherco and his countryman Max Viall on the Husqvarna. After them count Maurizio Micheluz on the fourth place in the overall. The former overall champion from Italy is certainly no onger a Junior with his 34 years.
Best local hero from was the reigning German champion Dennis Schröter on the fifth position, who had lost in the first Endurotest over 15 seconds after a crash.

As the best professional Maurizio Michelus Husqvarna with the also his classes seniors E3 local champion Dennis Schröter and Before the last leading overall championship, the Italian Oscar Ballets. The Este Rannar Usna, who had long been in second place, collapsed at the same time Three times slid back and forth, but fought back to the square before Fourth.

As overal-winner, Matteo Pavoni, of course, also won the Junior E1 Class, ahead of Sweden’s Pontus Skoog and the Czech Republic’s Krystof Kouble.

In the juniors E2 / E3 Class with the big motorcycles: David Abgall took the first place in front of both French Max Vial and Jean-Baptiste Nicolot.

With 33 starting rinders, the U20 class is one oft he most successful youth-promotion of the FIM Europe: Participants have tob e under 20 years old and must only start with 125 machines, according to the driving license already with 16 years.
Winner became the Swede Joakim Grelsson in front of his countryman Calle Johansson and the French Neels Theric.

In the veterans over 40 years, the leader of the championship Arne Domeyer, who got injured wrist after a crash, opened the way for the Finns Juha Puotsaari and Tero Koskinen, in front of the reigning champion Sebastian Krywult from Poland.

In the women class, Jessica Gardiner from Australie catches only one minute penalty on the track an won the class with this. Second Marita Nyqvist from Finland was followed by Sweden’s Hanna Berzelius.

Even without mountains or heavy uphils this competition was werth for an international competition: more than 95% off-road route and tight stages demand the Enduro riders out. There was no time to rest and the fastest riders needs over an hour and 18 minutes only for the nine special tests. The heavely rain at the end of the day does in made not even more easy easy for participants.

The second day will start at 8:00 o’clock instead of 9:00 o’clock. But the track an the distance will be the same at the end.