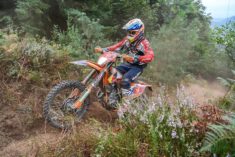 Day three of the ninety-second running of the FIM International Six Days Enduro (ISDE) in Brive, France saw competitors compete in dry and dusty conditions – albeit cooler – for a third consecutive day, but with a new course and new special tests. Continuing to hold firm at the head of the FIM World Trophy classification, France stretched their advantage over Australia to five minutes and nineteen seconds while France’s FIM Junior World Trophy squad moved to the top of the results, thirty-nine seconds ahead of Italy. Australia sit five minutes and forty-nine seconds ahead of the USA in the Women’s World Trophy class.

With three of their riders finishing inside the overall top four of the third day’s individual results, France were again the nation to beat in the FIM World Trophy team competition. Placing fifty-nine seconds ahead of second placed Australia, Christophe Nambotin – KTM, Jeremy Tarroux – Sherco, Loic Larrieu – Yamaha and Christophe Charlier – Husqvarna are now placed five minutes and nineteen seconds ahead of Australia with the event having reach its half-way point.

“Today was a good day for me and team France,” confirmed Loic Larrieu – Yamaha. “The competition was very close today with many new special tests, some slippery, some not. It was surprising how quickly some of the tests became rough and rutted. But I pushed really hard and came into the final test needing to win, which I managed to do. I’m very happy about that because I was disappointed earlier in the week. The French team were strong again and now we hope that we can continue pushing during the second half of the week.”

Day three was also a good one for France’s FIM Junior World Trophy squad. Third on day one, second on day two, the trio of Jeremy Miroir – Husqvarna, Hugo Blanjoue – Yamaha and Anthony Geslin – Beta topped the results on day three finishing twenty-six seconds ahead of Italy with Great Britain third. France are now thirty-nine seconds ahead of Italy in the overall standings with the USA third, Great Britain fourth and Chile – hosts of next year’s ISDE – fifth.

In winning the FIM Women’s World Trophy class Australia edged further ahead in the overall standings, now leading by five minutes and forty-nine seconds. Finishing ahead of the USA and France on day three, even with team rider Jessica Gardiner – Yamaha riding with a broken finger Australia look strong for yet another Women’s World Trophy team win. With the USA sitting second in the Women’s class standings, France hold third with Sweden and Italy rounding out the top five.

Jeremy Tarroux – Sherco was the fastest rider in the Enduro 1 class on day three, placing five seconds ahead of Spain’s Josep Garcia – KTM with Eero Remes – TM third. In the overall E1 class results Garcia leads the way, just seven seconds ahead of Tarroux with Italy’s Davide Guarneri a further seven seconds behind.

At the mid-way point of the 92nd International Six Days Enduro KTM 1 have moved to the top of the Manufacturer’s award with Nathan Watson – KTM, Josep Garcia – KTM and Christophe Nambotin sixteen seconds ahead of KTM 2 with KTM 3 in third.

Competition at the top of the Club team category is extremely tight with Italy leading the way, just fourteen seconds ahead of Auvergne Elite with Wales sit third.

Day four will see the riders face yet another new course and special tests as the event moves into its final phase.