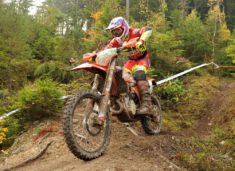 The first day of the final round of the Enduro European Championship took place on Friday 13th October 2017 in Gelnica / Slovakia. More than 180 km challenging offroad had to be crossed this day.
In the overall, Junior Matteo Pavoni was able to defend his lead with a seventh position this day. The second of the championship, Oscar Balletti, left his bike with a technical problem and the former third, the Italian Maurizio Micheluz, could catch up hugely: This experienced pilot, who had already been two-time overall champion, was winning the days special tests. Second was the German Marco Neubert in front of Jonathan Rosse from Switzerland.

Micheluz passed his Italian countryman Balletti not only in the class rating, but also in the overall championship, and right now he was only three points behind Pavoni, who had won at least his junior-class E1 on that day and expanded this the championship lead.
In the senior class E1 the current leader, Andreas Linusson from Sweden, didn’t risk anything and finished fifth position. His challenger Daan Bruijsten from Holland did not manage so well and was even only ninth. 34 points ahead are a lot – but the title is not yet awarded to Linusson.
In the senior class E2 the reigning champion Marco Neubert could not only win the first time this year, but also won nine points against the leader of the championship, the British Jamie Lewis. But the two riders still separate 14 points for the remaining two days.
In the senior class E3, Maurizio Micheluz took the lead in the championship through the overall victory and the failure of his countryman Oscar Balletti. But Balletti will be back with a repaired bike at the start the next day.
The second position in the class was done by local master Stefan Svitko from Slovakia.

With the veterans over 40 years the so far leading Arne Domeyer could calmly approach, because its point projection is sufficiently large. But the reigning champion Sebastian Krywult from Poland was back on his old displacement and instead of the 350th four-stroke engine he now took the first place with the 300-speed 2-stroke engine.

In the women, Jessica Gardiner from Australia fought for the first place in the class. Not only she was hampered by her shoulders but also had to learn in a short period to ride a new motorbike. Her competition-bike had been stolen from the transporter two nights ago. However, the friendly borrowed Yamaha was an unusual 2-stroke.

On the second day, the same distance will be ridden by the competitors. Because the time controls have been quite tight, the riders were given more time on the stage for the Saturday, before the final motocross on Sunday.

The championship-fight in the class for the youngest riders, the Junior-U-20-class could become more interisting: The promotor of the european enduro championship, Wolfgang Butzner, has put into special prices: The winner will earn a working-pavillon, and the riders on second and third position will have Metzeler-enduro-tieres for their bikes. Butzner will support the youngest riders in that way.