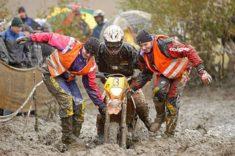 After seven months of thrilling racing, sweat, tears, and plenty of gruelling competition, the 2017 EnduroGP season draws to an end this weekend with the Acerbis Grand Prix of Germany, in Zschopau. With only the FIM Youth 125cc title already decided, Germany will see four new world champions crowned.
First organising a World Championship event back in 2004, the MSC Rund um Zschopau is back. “We’ve been working to bring this excellent event back to the championship for several years,” Confirmed ABC Communications’ Alain BLANCHARD.
“In 2004 MSC Rund um Zschopau provided a great final round to the series, and this moto club has a great experience. Each year, they organize the “Rund um Zschopau” which is always a great success. We are very proud to have an event of this calibre as a part of the EnduroGP World Championship. In addition to their traditional Rund um Zschopau event, the club also participated in the organisation of the mythical ISDE in 2012. This year’s MSC Rund um Zschopau will also be part of the final of the German Championship. It will be a great event.”

13 years later!
For their return to the world championship, the MSC organising team have promised a journey “to the old” as they look to deliver a challenging, traditional enduro event. On Saturday and Sunday competitors will take the start from the Wildeck Castle in the heart of Zschopau, first reaching a typically German KTM Enduro Test located in Börnichen. This special test has already provided many challenges during the 2012 ISDE and will be a key part of the race. Afterwards, competitors will have to face a 100% natural Technomousse Xtreme Test in Steinbruch before a first Time Check with service. Finally, the tour ends in Venusberg, with a Maxxis Cross Test, which will alternate between meadow and more “Enduro” passages through the woods. On Friday evening the Akrapovic Super Test will start from 17.00 with the German Championship and then at 19.00 with the EnduroGP regulars. This inaugural party will be held as every year in the industrial building of the “Klädtke Metallverarbeitung GmbH”. On the occasion of this final, ABC Communication will produce a live Facebook of this Akrapovic Super Test.

Zschopau is a town of around 10’600 inhabitants and is located in the valley of the Ore Mountains, in the heart of Saxony. Founded on the Salt Route between Leipzig and Prague (Czech Republic), Zschopau became one of the motorcycle capitals in Germany during the 19th century with the construction of the mythical factories of DKW (1910-1945) and MZ. In 1922, MZ was also the largest motorcycle factory in the world.

HOLCOMBE, the first champion of 2017?
Steve HOLCOMBE (GB – Beta) was dominant in the Enduro Sprint at Hawkstone Park, and could have returned from his home Grand Prix with the World Championship crown. But a problem with his rear wheel, coupled with the third place result of Loïc LARRIEU (F – Yamaha) during the cross-country race, meant otherwise. HOLCOMBE nevertheless arrives in Zschopau with a comfortable lead of 40 points over the Frenchman, and if he faces no mechanical or physical problems should be crowned on the first day of the race in Zschopau. But we can count on a LARRIEU to do all he can to keep his title hopes alive.
Not to mention Nathan WATSON (GB – KTM), in full form at the end of the season, who is fighting for a place on the final podium with the official Sherco rider Matthew PHILLIPS (AUS).
On a high since July, Christophe CHARLIER (F – Husqvarna) made history recently as the first rider to win the ISDE and the MXoN in the same year. In Germany, will he go for his first enduro victory on the International stage?
The two Spaniards Jaume BETRIU (KTM) and Cristobal GUERRERO (Yamaha) will also be closely watched in the fight for the honorary title of “Privateer of the Year”.
On their side, Italians Alex SALVINI (Beta), Giacomo REDONDI (Honda) and Deny PHILIPPAERTS (Beta) will be keen to finish the season well before going into a busy off season. Seriously injuring his knee at the start of the season, Gas Gas factory rider Antoine BASSET (F) will return to action in Zschopau.
Finally, a strong German contingent led by Marco NEUBERT (KTM) will be keen to prove that German enduro riders have the talent to compete with the world’s best.

Can MCCANNEY catch GARCIA?
Jamie MCCANNEY (GB – Yamaha) had hoped to leave his home Grand Prix with the Enduro 2 championship lead, or at the very least be within striking distance of his Spanish rival Josep GARCIA (E – KTM). But with GARCIA winning EnduroGP’s first ever sprint enduro before finishing third in the cross-country race at Hawkstone Park, he carries a 13-point lead into the final event of the season. But nothing is lost for the Isle of Man rider MCCANNEY and knowing his character, he will try everything to give Yamaha their first World title since Johnny AUBERT (F) in 2008.
Eero REMES (SF – TM), Pascal RAUCHENECKER (AUT – Husqvarna), Danny MCCANNEY (GB – Husqvarna) and Davide GUARNERI (I – Honda) could play an important role in this fight between the two favourites in Enduro2.
There is no doubt that riders such as Henri STIGELL (SF – Husqvarna), Daniel SANDERS (AUS – KTM) or Thomas OLDRATI (I – Husqvarna) and Jonathan BARRAGAN (E – Gas Gas) would like to shine during the last GP of the year.

Josep GARCIA (E – KTM)
Junior: up to the last special test…
In the under-23-year-old category Davide SORECA (I – Honda) is the current leader, but Brad FREEMAN (GB – Beta) has never been more competitive. Only four points separate the two riders and it looks to be a battle that will continue until the very last test of the weekend. Albin ELOWSON (S – Husqvarna), Matteo CAVALLO (I – Beta) and the returning Mikael PERSSON (S – Yamaha) could also play an important role in the outcome of the championship while all looking to end their own seasons on a high.

In FIM Youth 125cc class, there is a fine battle between the three GP winner – Andrea VERONA (I – TM), Leo LE QUERE (F – TM) and Ruy BARBOSA (CL – Husqvarna). BARBOSA will certainly want to repeat his recent impressive performance in Zschopau, but on his side VERONA will try to remind everyone why he was crowned World Champion two GPs before the end of the season.

Can FRANKE dethrone SANZ?
Maria FRANKE (D – KTM) has the advantage of competing at home, but it will still take an error from queen Laïa SANZ (E – KTM) in order to steal the Women’s title. But nothing is impossible and Maria has already proved at the GP of Hungary that she is capable of beating SANZ. Imagine the party if FRANKE was to win in front of her home fans! Together with the expected FRANKE / SANZ battle, British rider Jane DANIELS (GB – Husqvarna) can’t be ruled out as a possible final round winner.

So, it’s one of the European capitals of off-road motorcycling that will host the last round of what’s been a breath taking 2017 EnduroGP season. After more than seven months of close competition everything remains to be decided in the EnduroGP, Enduro 2, Junior and Women classes…