A Vintage Year! The curtain has just fallen on a 2017 season rich in emotions. We take 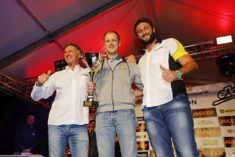 a look back at the very last round, the Acerbis GP of Germany, organised masterfully by the MSC Rund um Zschopau…

Organisation of the Year
While Portugal and Great Britain had set the bar very high in terms of organisation, the MSC Rund um Zschopau went above and beyond! The club is the regular organiser of this well-known race in Germany, and André RUDOLPH and his entire team were able to master everything when hosting EnduroGP. From the Akrapovic Super Test, held in a SuperEnduro style in a disused factory where the club welcomed about 8,000 spectators, all the way through to the special tests which were very well thought-out and celebrated “Real Enduro” with plenty of refreshments and snacks for the spectators. The “spectacular points” dotted around the lap were also a huge success with the public. Every evening fans could meet in the city center of Zschopau at the “Race Party” village set up by the organisers. At the end of the three days, the MSC Rund um Zschopau had welcomed between 35,000 and 40,000 spectators… with a ticket price of 20€ for the weekend. A great success and a good example for many organisers!

Aussie, Aussie, Aussie…
For this 2017 season finale, Australia was able to count on a new representative: Andrew WILKSCH (Sherco). They were four riders “from Down Under” present over the weekend: Matthew PHILLIPS (Sherco), Daniel SANDERS (KTM), Ben KEARNS (Sherco) and WILKSCH. But in addition to these four riders, a strong contingent of Australian fans had made the trip to cheer on their stars. We also had the pleasure of welcoming Alli MURFETT from the Tasmanian newspaper “The Advocate”, as well as Jarryd ENGLISH, a film-maker working for “Life of Loam” and Sherco Australia, who also created the short film “Between Trees” with Matthew PHILLIPS earlier this year. This is further proof that EnduroGP is becoming increasingly well-known on the other side of the planet!

Fan Club
In addition to the many Australian spectators, a Catalan Fan Club dedicated to Josep GARCIA (E – KTM) arrived in the paddock on Friday afternoon. The good dozen friends of the Enduro 2 star added a great atmosphere to each special test, and in the evenings at the podium. On Sunday, at the finish, the fan club were ecstatic and encouraged a triumphant GARCIA to do a burn-out with his title-winning 250 EXC. A nice atmosphere that continued into the end-of-season award ceremony on Sunday evening, and also on Monday evening in Catalunya where Josep GARCIA celebrated his title in the streets of Barcelona!

Super Test Live!
For the very first time, ABC Communication and its TV producer Vigneau & Co set up a live stream of the Super Test Akrapovic on Friday Night… More than an hour and a half of head-to-head battles Live on the EnduroGP Facebook page! From the Youth 125cc class all the way through to the EnduroGP finale, this live coverage was extremely popular with the fans… “Clearly, the goal next season will be to offer live Facebook coverage of each Super Test!” admitted Bastien BLANCHARD (ABC Communication) “We are thinking of giving Enduro fans more immersion and coverage with live press conferences and special events… now we have four months to prepare everything and offer even more content for our fans!”

Rookie of the Year ! 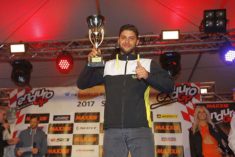 This season, there were two riders able to claim this honorary title! Daniel SANDERS put together a consistent season and finished in 8th position in Enduro 2. His rival for the title, Christophe CHARLIER (F – Husqvarna), despite an injury in Hungary, shone with his spectacular riding, his warrior temperament, and his three podiums… so it is therefore logical that the factory Husqvarna rider succeeds Nathan WATSON (GB – KTM) as “Rookie of the Year”! CC23 has shown great potential and no doubt will very quickly become a solid contender for a world title!

Privateer Team of the Year
Kytönen Motorsport, Dumontier Racing, Lunigiana or JET Racing, all private teams that have done very well in the World Championship this year and have shown their passion for Enduro. But this year, the title of “Privateer Team of the Year” has gone to the RFME. Indeed, with its own resources, the Spanish Federation has put forward 12 Iberian riders to come and ride in the FIM Maxxis EnduroGP World Championship. An initiative that deserved to be recognised, especially since some of their riders have achieved podiums such as Alex ISCLA (KTM), Gerard GOMEZ (KTM) and Alonso TRIGO HIJON (Husqvarna) in Youth 125cc or put together strong seasons in Junior like Tosha SCHAREINA (Husqvarna) and Enric FRANCISCO (KTM). A good example for all the Federations!

A First World Title for Maxxis!
Title sponsor of the FIM EnduroGP World Championship since 2004, Maxxis Tires is, since this year, the partner of the Beta Boano team and with Brad FREEMAN (GB) becoming the Junior World Champion, the Taiwanese brand were able to win their first title in the discipline! Lothar HEDDRAM from Maxxis Germany even had the privilege of handing the number 1 plaque to the British rider … This title is proof that Maxxis has progressed through the years and can now compete with brands such as Metzeler or Michelin.

A Legend on an E-Bike
Zschopau is synonymous with German Enduro and during this weekend, we were able to find Uwe WEBER, winner of the Six Days 1987 with the East German team! With the same jovial character that he has always possessed, Uwe agreed to take our onboard camera for a lap of the Maxxis Cross Test with … a KTM Freeride E! A legend of enduro on an electric motorcycle? It is possible, and shows that everyone is concerned by the ecological problems encountered in our sport!

Privateer of the Year!
The fight between Jaume BETRIU (E – KTM) and Cristobal GUERRERO (E – Yamaha) throughout the season finally turned to the advantage of KTM España! Separated by one point before the GP, BETRIU needed just a few more points after Saturday’s action. The Catalan had a good second day, he also took advantage of his rival’s DNF due to a fall. BETRIU therefore succeeds Antoine BASSET (F) as Privateer of the Year! BETRIU put together a very strong season, competing with factory riders such as Alex SALVINI (I – Beta) and Giacomo REDONDI (I – Honda). The friendly Spaniard also finishes a good 7th place in EnduroGP… We hope that his results will allow him to win a contract with a team factory in 2018…