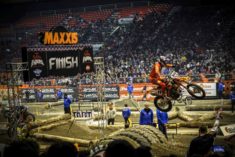 The atmosphere in the Biskaia Arena was electric tonight for the 4th round of the 2018 MAXXIS FIM SUPERENDURO WORLD CHAMPIONSHIP.
A little over 6000 fans came to the BEC (Bilbao Exhibition Center) to cheer on the best international riders. They weren’t disappointed by the show, which was full-on, complete with enthusiastic cheerleaders and shockingly unpredictable races!

From the Super Pole Akrapovic onwards the vibe of the evening was set, with Brits Jonny WALKER (GB – KTM) and Billy BOLT (GB – Husqvarna) leading in front of Colton Haaker (USA – Husqvarna), Taddy BLAZUSIAK (PL – KTM), and the seemingly off-form Cody WEBB (USA – KTM) who could only grab 5th place.

The first race, which was led early on by Colton HAAKER (USA – Husqvarna), was eventually won by Cody WEBB (USA – KTM), who pulled out a huge gap at the front, and took advantage of an error from HAAKER, as well as putting distance between himself, Taddy BLAZUSIAK (PL – KTM) and Jonny WALKER (GB – KTM). WEBB’s rivals had no answer for his strong pace.

The second race started with drama – there was a bottleneck on the first corner and many riders were held up. BLAZUSIAK took the lead over WALKER, but the KTM pair were closely followed by their team-mate, Cody WEBB. The American wore down his combatants and moved into top spot. The final lap became very tense, and left onlookers in suspense, as Taddy edged ever closer to Cody. The Pole pushed hard in the closing moments, and finished mere meters behind a victorious Webb!

The third and final race was extremely exciting, BLAZUSIAK got off to a good start, and behind him WEBB and WALKER were struggling against the risky rock garden. WEBB then opened the gas to try to recover the time he’d lost, but several mistakes and a couple of big crashes prevented him from reaping any rewards in the race.
And so it was that Taddy BLAZUSIAK not only took the race win thanks to his incredible performance – but also the overall GP of Euskadi victory, to the surprise of many! The Pole said he hadn’t felt like himself all night, but in the end his determination and experience saw him top the leaderboard on the night.

Kevin GALLAS (D – Husqvarna) won the Euskadi GP with the same mastery and consistency which has defined him all season. While he won the 1st race hands down, it was in the 2nd race that he lost out – having been blocked by a pile-up for a while, he was unable to catch the distance gained by Teodor KABAKCHIEV (BHR) and Diego HERRERA (CHL), who knew how to seize this rare moment of weakness. Therefore in Race 2 it was a very happy victory for HERRERA. In the 3rd race, Kévin GALLAS took to the front early on and never looked back.

While we could say that this latest overall victory from GALLAS in Junior was predictable, the Prestige podium was far from certain, and as always it was subject to several surprises and dramatic moments. The biggest revelation was the Race 3 victory from BLAZUSIAK, who built on his success throughout the night to end up emphatically winning the GP, and snatching some points back from WEBB, who could only manage 3rd overall. All to play for now at the season finale in Sweden?

Kévin GALLAS: “The track was particularly difficult and technically challenging for the body. I had a bad start and found myself stuck with the other riders, but that’s racing and we learn through these situations! I am very happy with this GP and cannot wait to be in Sweden to try to win the Junior World Champion title!”

Taddy BLAZUSIAK: “I’m really happy with my last race and I find it crazy to think that I won the GP on the strength of that!”

Cody WEBB: “It was great tonight, I’m happy with the first 2 races but Taddy did a great performance in the last race, and his win is deserved.”