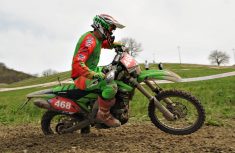 Italy first…
The new season of the European Championship started right this Saturday, the 14th of April 2018, in Fabriano / Italy (200 km north of Rome).
And the first winner in this competition has been an Italian rider too!
It was a continuation of the Italian championship – last years overall champion Matteo Pavoni was fighting against his countrymen Maurizio Micheluz and Alessandro Battig.

In the beginning not so strong, Pavoni increased in the last five from twelve specialtests – but Micheluz and Battig has been to far away, he could not reach.
Battig was riding this year a 450cc Kawasaki instead of the smaller 250cc from last seasons: This helped him to win the overall at this first day in Fabriano and the first day of this seasons championship.
Micheluz became second overall and won the new 250-2-Stroke class, while the former Junior Pavoni was third overall and won the over 250 cc 2-stroke class.

While the man had to do four laps with each 65 km, the women had to ride only three: Former (2015) Champion of women-class, Sanna Kärkkäinen from Finland, won at the least. „But it was quite hard sometimes: I have had to overtake so many riders, because I was starting so late,“ she commented in the evening. But next competition she will have a better starting-position, because of her championship-points.

A big number of Scandinavian rider had been coming to the kick off the championship. But most of hem had no chance for training at home, with still ice and snow from Finland over Sweden to Norway.

For the second day, the Sunday, the jury cut the distance for all riders to 3 laps, because of the weather forecast.
More information and schedules, results and links, there are always up to date and right on the official website:
http://european-enduro.com/