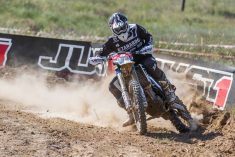 The stars of EnduroGP have experienced everything during the first three Grand Prix of the season… from the snow and cold during the mythical Päijänne Enduro (Finland), then the torrenting rain, cold, and mud last week in Santiago de Compostela (Spain), before they suffered in the heat (27 degrees) and dust during the first day of the Polisport Grand Prix of Portugal in Castelo Branco.

The champions from the 2018 season will have to be very adaptable and able to excel under every condition – they will need to be well trained and extremely well prepared.
And the battles for the titles are incredible, as has been proven on this 5th day of the season, with some riders “on fire” on the very fast but difficult route, in Central -Eastern Portugal, where 75 riders fought it out for more than one hour and 45 minutes per lap!

Davide GUARNERI (I-Honda Red Moto) was not able to join in the “party” after a heavy fall on the first lap which resulted in hospitalisation. The Honda Red Moto Team had a “down day” in general as they also ‘lost’ their Junior rider FACCHETTI (I) following mechanical problems.

Jamie MCCANNEY Gave It His All…
“SALVO” is definitely back! Alex SALVINI (I-Husqvarna Zanardo), the rider from Bologna, is well known in the paddock for his fierce determination to win, and this season he has found a lot of speed. Today he topped the EnduroGP category after leading since last night’s Supertest, SALVINI successfully combined determination, consistency, and pace to take his second win of the year. But Jamie MCCANNEY (GB-Yamaha) just missed out, as he briefly led on the 3rd lap on his very efficient 250 Yamaha WR before making a mistake in Enduro Test 3. And despite all his talent, the Manxman could not overcome SALVINI, who was solid as a rock.

For his return to the GP scene, the Frenchman Mathias BELLINO (Honda) was also in the fight with SALVINI and MCCANNEY for a long time before losing time towards the end of the 3rd lap… he nevertheless took a remarkable 5th place, preceded by his compatriot Christophe NAMBOTIN (F-Gas Gas) who was only 8th at 1/3 race distance, before “NAMBOT” started an impressive comeback which led him to the 3rd step of the podium.

It was another superb race also from World Junior Champion Brad FREEMAN (GB -Beta Boano)! Winner of the final test, he finished 4th ahead of the official factory Beta rider and World Champion, Steve HOLCOMBE (GB-Beta), the Brit having an ‘average’ day by his standards (6th). Loic LARRIEU (F-Yamaha) and Eero REMES (SF-TM) 7th and 8th respectively, ahead of the factory Gas Gas rider Danny MCCANNEY (GB). Matthew PHILIPPS (AUS-Sherco), as in Spain, could not do better than 10th. The EnduroGP category was really exciting and impressive to follow today as it gave us a lot of emotions and twists.

NAMBOTIN On Form…
Alex SALVINI “doubles up” on his victory tally in Enduro 2, where he now settles solidly at the top of this category. Mathias BELLINO scored an excellent 2nd place, ahead of Loic LARRIEU, Eero REMES, Matthew PHILLIPS and Thomas OLDRATI (I – (Honda RedMoto) who was 6th.The “Angry Ginger” (as he is known), BELLINO, is back on the World stage and back on the podium, a very heartening thing to see after the Frenchman suffered for two seasons with repeated injuries.

The ‘blue crew’ rider Jamie MCCANNEY “easily” won in E1 on his factory Yamaha , and he will be very difficult to topple at the head of the championship in the small capacity class, despite all the brilliance of the promising youngster, Brad FREEMAN, and the consistency of Antoine BASSET (F-Gas Gas). We must also give a mention to Andalusian rider Victor GUERRERO (E-Yamaha) who took a very good 4th place, and, including his home GP last week, has made his best start to the season for a long time while Manuel MONNI (I-Suzuki), still convalescing, achieved an encouraging 5th spot.

Christophe NAMBOTIN (F-Gas Gas) found the joy of victory in E3, and offers a great reward to the factory based in Girona, which was affected by a major fire the day before the race. Steve HOLCOMBE and fellow Gas Gas rider Danny MCCANNEY completed the podium.

Italy on Top Again in the Juniors
The battle was also splendid and intense in the Junior classes… particularly thanks to the “Talenti Azzurri” (Italian Federation supported riders) who set the bar incredibly high at the start of the day, with TM duo Andrea VERONA (I-TM) and Davide SORECA (I-TM) very pacy and leading the way at the halfway mark after a spectacular crash for their fellow countryman, Matteo CAVALLO (I-Beta Boano). But CAVALLO was the strongest… Jarno BOANO’s protégé chased down and overcame the gap to his blue rivals, emphatically making it all count on the final lap. CAVALLO therefore took a magnificent victory, despite the intense heat that made all of the Juniors suffer, with several of them exhausted by the end of the day.

In the newly-created Junior 1 (J1) category, Andrea VERONA continued the dominant form he began in Spain and added another victory and another 20 points to his tally, finish ahead of spectacular Sherco rider Theo ESPINASSE (F), who was the most threatening rider for VERONA in J1 on Saturday. The Chilean Ruy BARBOSA (Husqvarna Zanardo), making his debut in the Junior class, impressed everyone on his 125cc to finish 3rd… And the South Americans in general really made an impact in Portugal with Bruno CRIVILIN (B – KTM) a surprising 4th – a result that will thrill all the fans from Belo Horizonte, where is this great hope of the discipline hails from. Antoine MAGAIN (B – KTM) also continues to delight fans in Belgium with a very good 5th position today.

Matteo CAVALLO won again in Junior 2 (J2) with an advantage of more than a minute and thirty seconds over the young protégé of Ivan CERVANTES in the RFME team (Spanish Federation), Enric FRANCISCO (E – KTM). While Englishman Joe WOOTTON (UK – Husqvarna) enjoyed the joys of his first podium after improving throughout the day and the 3 minute time penalty of his rival, Davide SORECA (I – TM)…

Challenged and surprised by an event which, on paper, they expected to be easier, the 75 riders of this Polisport Grand Prix of Portugal will start again tomorrow morning at 09.00 local time (10:00 CET) for a second day which will also end, as today, with a run through the Akrapovic Super Test – where everything could be won or lost as the gaps between the top riders are tiny!

What They Said:
Steve HOLCOMBE: “A difficult day for me. I just couldn’t get the feeling on this very fast track.”

Alex SALVINI: “It was a long difficult and very difficult day, both on the liaison and on the special tests, where I couldn’t make any mistakes as Jamie MCCANNEY was putting a lot of pressure on me. I made a big mistake in the race and luckily I was able to concentrate afterwards to still finish strong… but it was hard!”

Christophe NAMBOTIN: “I’m very happy with this first victory for quite some time… I decided to raise the pace in the middle of the race to make up for any issues at the end of the lap where we had to do the Extreme and the Super Test – which are not my specialities, and this tactic seemed to pay off. I want to dedicate this victory to the entire Gas Gas factory, its bosses and all its employees who were badly hit by a fire recently.”

Jamie MCCANNEY: “I focused too much on the EnduroGP category and it almost cost me dearly in my battle with Brad Freeman … but I’m really happy with this victory in E1 because I almost lost it! ”

Matteo CAVALLO: “I started well this morning but the big crash in the extreme made me lose a lot of time because I left that test in 8th place. It was very stressful with the heat and a very technical liaison where you could never rest!”