Battig strikes back in Bacau on the second day 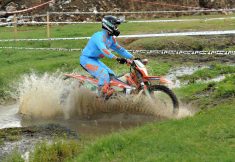 The leader in the overall championship, the Italian Alessandro Battig took revenge at the second day in the second round of the European Enduro Championship in Bacau, Romania. While he lost a lot of time in the difficult uphill, where he had to push and fight on the first day, things went smoothly for the Kawasaki pilot on Sunday: Already in the first special-test of the day he was able to ride the fastest time of all participants. In the new modified enduro test, in which the increasingly difficult uphill was taken out, he had to admit defeat from time to time, but it was enough for overall victory in the end of the day.

However, the young Swede Erik Appelqvist even came dangerously close to him, except for one second, in the last lap. Appelqvist won the Junior class E2/E3 on his Yamaha ahead of yesterday’s overall winner Hugo Blanjoue. Thus this frenchman became the winner over both days, in front of Appelqvist and Battig (see photo of the pricegiving ceremony)

With this results Blanjoue moves up to second place behind Battig in the championship.
Maurizio Micheluz repaired his suspension problems on his Husqvarna under control during the day and improved to fifth overall and won the two-stroke class up to 250 cc.

The Czech Jiri Hadek won again on the KTM in the larger-capacity two-stroke class over 250 cc:

In the small four-stroke class up to 250 cc the Frenchman Thomas Dubost won on the KTM ahead of the Swiss Jonathan Rosse on Yamaha.

With his overall victory Alessandro Battig naturally also won his 4-stroke class over 250 cc, ahead of the two Swedes Oliver Nelson and Rikard Hansson.

Like yesterday, the ladies only had to complete three instead of four laps of 50 km each, as the men did. The day’s victory went to the Finnish rider Sanna Kärkkäinen on the KTM ahead of the previous day’s winner Nina Klink from the Netherlands.

Despite the rain at night, the track was probably even better to drive than the day before. In addition, there was not so much dust, which had partly led to visual problems on the first day and the ground was partly more handy.

The next competition will be on August 11th and 12th in Skövde. There, the Swedes, who have been successful so far, are reaping an additional home advantage that the Italians have had already in their home country at the first round of the year.