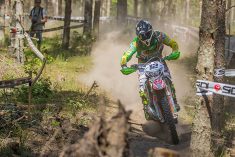 It’s unanimous… It’s been a long time since an Enduro event has provoked so many positive and favourable comments from the EnduroGP paddock. Indeed “RedMoto” the organisers, deserve to be congratulated for the quality of its organisation and the overall running of the event, which is both very professional and passionate. The route which runs around the capital city of Tallinn, highlighted the ability of the 90 riders entered into this Estonian GP, who rode to their full potential and made an exciting day for the fans.

But this GP, held under sunny skies and summer weather, had a surprise in store in the shape of 2017 Junior World Champion, Brad FREEMAN (GB-Beta Boano) who has undoubtedly been the big surprise of the early part of the season on his 250cc Beta. The protege of Jarno BOANO has impressed everyone since the beginning of the season with his speed and his very positive attitude. Whether in the cold and snow of Päijänne (Finland) or the dust of the GP of Portugal, the Brit has been sporting as well as always sporting a smile!

The Day for Surprises…
However, on the tests of Tallinn and Maardu (Cross Test), the youngster from Staffordshire hardly had time to catch his breath on the way to the finish. Especially as fellow countryman Steve HOLCOMBE (GB-Beta) launched an attack with his usual determination and led the race at the end of the first lap, where Christophe CHARLIER (F-Beta) and Jamie MCCANNEY (GB-Yamaha) both fell heavily and lost a lot of time. While HOLCOMBE led the dance, FREEMAN and also Alex SALVINI (I-Husqvarna) and Eero REMES were in ambush, meanwhile the rest of the pack were irretrievably outpaced by this flying quartet. The long Enduro test which lasted more than 10 minutes would once again prove to make the difference, while Steve HOLCOMBE continued to lead the way at the end of the second lap by 7 seconds ahead of FREEMAN, fatigue started to creep in – Steve HOLCOMBE fell twice on the ET3 while Brad FREEMAN opened the gas and took control of the race.
We didn’t see the Englishman again after that and he won the EnduroGP class on his 4th outing in the Senior ranks!

The tough and determined Eero REMES didn’t hold back, and the similarities which Estonia and Finland share allowed him to finish the race with a double podium – in class and in EGP. In fact, the Finn was so fast that he demoted Steve HOLCOMBE and snatched second place overall on the last two tests – proof of his fighting spirit. Alex SALVINI also continued his strong form, but he was forced to finish behind Steve HOLCOMBE, by less than a second! Steve HOLCOMBE was slightly disappointed as he has still not won a single day in the EnduroGP class this season.

HOLCOMBE Forced to Wait…
Behind the “fast and furious four”, Jamie MCCANNEY (GB-Yamaha) recovered well after a heavy fall in the morning, and he took a valuable 5th place overall in front of his brother Danny (GB Gas Gas), who was a very good sixth. Suffering with his injuries Loic LARRIEU (F-Yamaha) achieved an important 7th place ahead of Thomas OLDRATI (I-Honda Red Moto), confirming the Italian’s current good form. Antoine BASSET (F-Gas Gas) grabbed another Top 10 finished overall in front of his compatriot Anthony GESLIN (F-Beta) who brilliantly confirms his good progress in 2018. Replacement rider Alex SNOW (GB-Honda Red Moto) was 11th, in front of Matthew PHILLIPS (AUS-Sherco) who was only 12th and seems to be a shadow of his usual self…

It goes without saying that Brad FREEMAN was the winner in Enduro 1, in front of Jamie MCCANNEY and Antoine BASSET. Promising former motocrosser Alex SNOW was 4th in class.

Thanks to his great pace at the end of the day, Eero REMES won the Enduro 2 class ahead of his big rivals Alex SALVINI and Loïc LARRIEU, while Thomas OLDRATI is getting closer and closer to the “box” at each event.

Steve HOLCOMBE was not worried in E3, despite the great race from Manxman Danny MCCANNEY, a brilliant second again, while Anthony GESLIN found his way back on the podium after dispatching of the “elder statesman” Christophe NAMBOTIN (F-Gas Gas).

ESPINASSE’S Turn!
This first day of the Estonia GP had more surprises for the fans in the Junior category too, where Andrea VERONA (I-TM) was thought to be on course for another success. But no-one quite counted on the Sherco armada led by Théo ESPINASSE (F-Sherco), Jack EDMONDSON (GB-Sherco) and David ABGRALL (F-Sherco Academy). During the second lap Theo ESPINASSE raised the pace for an unstoppable end to his race that took him to the top step of the overall Junior podium to the delight of his team manager Fabrizio AZZALIN.

Only Matteo CAVALLO (I-Beta Boano) was able to resist somewhat against the French factory, to finish second while Andrea VERONA completed the Top 3 overall in front of Jack EDMONDSON, Davide SORECA (I-TM) and David ABGRALL, very good 6th.
In the J1 (small engine) category, Theo ESPINASSE achieved the double despite the task of beating the talented Andrea VERONA, while the Scandinavian duo Antti HANNINEN (SF-Husqvarna) and Erik APPELQVIST (S-Yamaha) fought it out until the finish for the final podium position, the Finn eventually snatching 3rd.
In J2, Matteo CAVALLO once again triumphed in the Beta Boano colours here in Tallinn with an impeccable victory ahead of Jack EDMONDSON and Davide SORECA.

Impressive yesterday evening at the Akrapovic Super Test, Matthew VANOEVELEN (B-Sherco Academy) was the favorite for the victory in the Youth 125cc class. But the very promising young Belgian could not last the distance and he saw Dan MUNDELL (GB-Sherco) and Ruy BARBOSA (CL-Husqvarna) overtake him. He also lost 3rd place to young Finn Roni KYTONEN (SF-Husqvarna) on the last lap. But the performance of the day, undeniably, is that of the Chilean Ruy BARBOSA who stood on the top step after a very “average” start to the day. The young South American gave his all and managed to beat quick Brit Dan MUNDELL by a mere 7 seconds.

This first day of the Maxxis Grand Prix of Estonia was full of surprises and revelations, with the first successes of FREEMAN and ESPINASSE… further proof of the important stock of talented riders racing in the Maxxis FIM Enduro World Championship…
And tomorrow morning from 09.00 onwards there are sure to be more surprises, plenty of close racing, and several happy winners!

Steve HOLCOMBE: “I’m a bit down physically, and I crashed twice in Enduro Test 3. But my physical condition in general isn’t great at the moment because of a rib injury that I’ve been carrying. Anyway, it’s a very nice race and a nice lap to ride.”

Brad FREEMAN: “I’m really happy… a few months ago I was looking up to and admiring all these riders from the side of the stage, and now I’m winning and finishing in front of them! It’s really something I never imagined happening this early in the season!”

Anthony GESLIN: “Achieving another podium here in Estonia, and in front of the “boss” NAMBOTIN…it’s amazing, it’s pure happiness!”

Christophe CHARLIER: “It was a day of crashes for me … from the first lap to the final Cross Test. One to forget, I’ll aim to come back quicker and stronger tomorrow!”

Théo ESPINASSE: “Winning so early in the season surprises me a bit, but so much the better! I knew that I could make up the difference in the long Enduro Test where my little 250cc 4-stroke Sherco could work well against the big two-strokes of CAVALLO and the others! Everything went well and I’m at the top!”

Christophe NAMBOTIN: “The organisation here is really great with a nice layout and nice specials, especially the Extreme…but talking about my performance, it’s better to forget today! I was simply not there. My bike worked very well but the rider today was absent!”