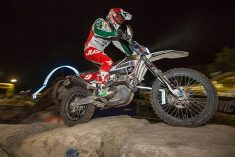 The first ever “Hard Enduro” Grand Prix in the history of the FIM Maxxis Enduro World Championship has just ended with the “dream scenario” of the tifosi (fans) at the Off Road Park of Pietramurata… a victory for Alex SALVINI (I – Husqvarna).
Before the joy of the podium, the stars of EnduroGP had to face a long day starting at 09:00 on the MXGP track, with three heats of motocross. The times were then carried over to the afternoon where the riders did four laps of the Enduro Test, with each run lasting more than 8 minutes! The day’s entertainment then ended with the famous Xtreme Test of Pietramurata also known as The Wall!

LARRIEU starts strong…
During the three rounds of Cross, we witnessed a great show from Loïc LARRIEU (F – Yamaha), two wins, before the last one was “stolen” by Mathias BELLINO (F – Honda). Before tackling the four Enduro Test X-Rocks, the official Outsiders Yamaha rider was 16 seconds ahead of the local hero Alex SALVINI (I – Husqvarna). Giacomo REDONDI (I – Honda) completed the Top 3 ahead of Steve HOLCOMBE (GB – Beta) and Eero REMES (SF – TM).

But his morning form was not carried over to the afternoon and LARRIEU who seemed “stratospheric” early in the day never found the right pace in a very hard Enduro Test. So he quickly let SALVINI and HOLCOMBE take over the fight for leadership. Despite 4 wins on the bounce, the Brit’s former teammate at Beta Factory found the power to resist him and head to the much feared Xtreme Test Technomousse of the evening with a lead of nearly 8 seconds. Behind this pair, wildcard Giacomo REDONDI continued his merry way and consolidated his second place in EnduroGP in front of LARRIEU and Danny MCCANNEY (GB – Gas Gas).

FREEMAN in E1, HOLCOMBE in E3
After a long day of riding, it was time for the Technomousse Xtreme Test. And despite the very good first lap of HOLCOMBE, nothing could stop “Rocky” SALVINI winning his Grand Prix and pocketing, at the same time, his 5th win of the season! With HOLCOMBE 2nd, LARRIEU took the necessary steps in this very tricky and technical stage to ensure his place on the EGP podium. Daniel MCCANNEY showed a certain ease in this stage and he took a well-earned 4th overall. Just ahead of popular Italian Giacomo REDONDI.

In Enduro 2, Alex SALVINI consolidated a little more his position at the top of the standings with another victory in front of Loic LARRIEU and Giacomo REDONDI. We must also mention the big crash of Christophe CHARLIER (F – Beta) during the last MX heat, he could not have checks in the hospital of Trento, so he’ll return to Corscia and udate us soon.

In Enduro 1, Brad FREEMAN (GB – Beta Boano) scored his fourth victory in a row ahead of Antoine BASSET (F – Gas Gas) and Manuel MONNI (I – Suzuki). For his part, Jamie MCCANNEY had to give up after a fall in the Enduro Test and a suspected dislocation of the shoulder …

CAVALLO Unstoppable
In the Juniors, the provisional leader Matteo CAVALLO (I – Beta Boano) was untouchable from the Cross races until the last Xtreme Tests. He finished the day with a 1 minute 47 second lead over his runner-up, Andrea VERONA (I – TM)! Jolly Racing rider Joe WOOTTON (GB – Husqvarna), meanwhile, completed a very strong day and finished third in the scratch ahead of his compatriot Jack EDMONDSON (GB – Sherco) and Italy’s Emanuele FACCHETTI (Honda RedMoto) .
CAVALLO won the Junior 2 in front of Brit pairing WOOTTON and EDMONDSON, while Andrea VERONA won in J1 ahead of FACCHETTI and the factory Sherco CH Racing rider Theo ESPINASSE (F – Sherco).

Finally, in Youth 125cc, while the Finn Roni KYTÖNEN (5th – Husqvarna) dominated the three Motocross heats, he could not resist the fury of Ruy BARBOSA (CL – Husqvarna) in the Enduro and Xtreme. Dan MUNDELL (GB – Sherco) went all the way to second place at the expense of the Belgian Matthew VANOEVELEN (Sherco) while Gerard GOMEZ (E – Sherco) placed a third Sherco in the Top 5.

The curtain has just fallen on this first ever Trentino Grand Prix at the Off Road Park in Pietramurata. A dream evening for SALVINI, the Italian spectators, and the organisers. And especially for the Championship, which becomes even more interesting and indecisive just before going on a “holiday” for two months! We will returning to Edolo in Italy, on the 1st and 2nd of September for a Classic Enduro which already promises to be extremely exciting!

What They Said:
Alex SALVINI: “This Grand Prix is so special for me! My girlfriend was in charge of the organisation and with my recent results, all the tifosi were really behind me. I was really under pressure for this round and I am so relieved and happy to win. Certainly the most emotional victory of my career!”

Steve HOLCOMBE : “I’m really disappointed … I never managed to find a good rhythm in the Cross heats, but I did what was necessary in the afternoon to put myself neck and neck with Alex before the last four Xtremes. But errors in XT2 and XT3 did not allow me to go for the victory. Now there’s only one goal going forward…victory!”

Brad FREEMAN : “It was a very special Grand Prix. I was fighting with Jamie MCCANNEY for leadership until he unfortunately hurt himself. First of all, I hope he recovers soon. After Jamie went out I concentrated on victory in my category.”

Matteo CAVALLO : “Very sincerely, despite my good day, I did not know what to expect in the Xtreme! I never thought during the off-season and the first Grand Prix that I was going to aim for the title and I must say that now, it makes me a little … scared. But I must not falter because nothing is done!”