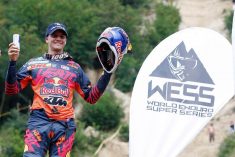 Wels, Austria – 30 August 2018 — Leading the World Enduro Super Series, Jonny Walker heads to round five at Poland’s Red Bull 111 Megawatt with his sights set on victory. Already a three-time consecutive winner of the event, he’s hungry to make it a fourth win and extend his advantage at the top of the standings, as the second half of the WESS season hits its stride on September 8/9.

Refreshed and recharged following his podium result at round four’s Red Bull Romaniacs, here the Red Bull KTM Factory Racing rider talks about the importance of winning in Poland and maintaining his advantage in the race to become this year’s ULTIMATE ENDURO CHAMPION…

Jonny, as a three-time consecutive winner of Red Bull 111 Megawatt are you ready to challenge for a fourth win at round five of WESS?

Jonny Walker: “I’ve won Red Bull 111 Megawatt for the last three years, but now more than ever is the most important time to win this race. With it being a part of WESS, a championship I’m leading, I can’t settle for anything less. We’re just beginning the second half of the series too and although I top the standings my advantage isn’t that much. I really need a win here to build a bigger points advantage for the rest of the races to come.”

With three wins and a 100 per cent podium finishing record, what’s been your favoured moments from the four editions of Red Bull 111 Megawatt?

“I’ve had a lot of good battles at Red Bull 111 Megawatt but definitely for the last two years the fight between Mario Roman and myself have been some of the best. We both seem to be very close in speed around the coal mine and are always together at the finish line. He’s made me swe at for the win twice now, especially in 2016 when I won by just two seconds. After 90 kilometres of racing, that’s incredibly close.”

Why do you think the racing is always so close in the PGE coal mine?

“I think it boils down to the nature of the terrain, the coal mine. It’s so big that the course is impossible to learn. There’s no opportunity to walk it beforehand, so on lap one everyone is trying to figure out where it goes. Also, nobody really wants to lead lap one because there’s so many pitfalls and that keeps everyone bunched up. Then about midway around lap two we catch the slower riders from lap one and again it bunches everything up.”

Do you find it requires a certain element of race craft to be successful?

“Yeah it takes a lot of race craft to pull off the win. There are times when you need to be patient and work through traffic and then there’s times when you need to push on. You are always trying to anticipate what’s coming next because the situation changes from lap-to-lap. The track is so physical too, the sand takes a lot of energy to ride fast and if you make a mistake on the climbs you can lose so much time. For me, I feel like I need to be in a strong position starting the final lap and then give 100 per cent to the chequered flag.”

The second half of season will see the nature of championship change with the inclusion of Cross-Country races and a Beach Race. How are you approaching these rounds?

“Even though we’re four rounds in it feels like things are really only getting started. It’s quite an intense second half to the series as we’ve got four rounds in 10 weeks, so there’s a lot of racing left to give. Red Bull 111 Megawatt is the final Hard Enduro on the calendar but with a Cross-Country feel it also leads into the faster races to come. They are all new to me too and are going to be a challenge to get right, but I’ve been working hard to get ready for them and I’m up for the fight.”

Red Bull 111 Megawatt is your focus now, but round six in Great Britain is a home race for you, are you looking forward to racing at Hawkstone Park?

“To have a world class Enduro in Britain means a lot and Hawkstone Park is such an iconic venue to do it in. I’m excited to ride there because I don’t get the opportunity to race a lot at home. It’s going to be a memorable event for sure, and really tough. British fans are so passionate about Enduro it’ll be great to race there. Of course, the pressure will be on to deliver a big result, but a win on home turf would be something special.”

Finally, as the championship leader at the series’ halfway point, what would it mean to become this year’s Ultimate Enduro Champion?

“To end the year as the ULTIMATE ENDURO CHAMPION would be huge. It would be an amazing achievement because it’s all about being the best all-round Enduro rider. But it’s something I’m trying not to focus on just yet because there is also a lot of racing to come and in a championship like WESS anything can happen. I need to stay focused on each round. Red Bull 111 Megawatt is next on the list and I’ll be giving it 100 per cent to win in Poland. Finishing second is not an option…”

Round five of the World Enduro Super Series takes place at Red Bull 111 Megawatt in Poland on September 8/9.