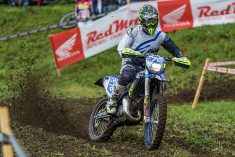 HOLCOMBE Supersonic !
Rainy and chilly this morning, this first day of the Acerbis Grand Prix of Italy eventually turned sunny from midday onwards and was able to offer the fans – who came in droves – a beautiful show with many plot twists in all categories!

Starting with the top class, EnduroGP, where Alex SALVINI (I – Husqvarna) was forced to retire on the third lap, the fault of a poor quality fuel… the Italian, who was the leader of the category when he arrived in Edolo, lost big points and could only watch as his closest competitor, Steve HOLCOMBE (GB – Beta) took first place. In fact, today the reigning World Champion barely put a wheel out of line! Very comfortable in the mud, the factory Beta rider impressed everyone by winning with a gap of more than 1 minute 27 ahead of his first pursuer, Brad FREEMAN (GB – Beta Boano). It’s now HOLCOMBE who leads the standings, 12 points ahead of the unlucky SALVINI. Jamie MCCANNEY (GB – Yamaha) also had to give way to a very neat Eero REMES (SF – TM) today, and his teammate in the Outsiders Yamaha team, Loïc LARRIEU (F) completed the Top 5.

Trust in the mechanics…
SALVINI’s DNF also shook up the standings in Enduro 2, since with the victory of Eero REMES and the second place of LARRIEU, the Jolly Racing rider can now count only 13 points ahead of the Frenchman and 14 ahead of the Finn. “Salvo’s” mistfortune also benefited Thomas OLDRATI (I – Honda RedMoto); often well placed this year, the 2008 Junior World Champion took his first podium with the 450CR-F! He was ahead of his compatriot and crowd favourite, Giacomo REDONDI (I – Honda RedMoto) by only 3 seconds, while Christophe CHARLIER (F – Beta) proved that he has recovered from his fall at the Trentino GP taking a convincing 5th place.

In Enduro 1, Brad FREEMAN for much of the day was in a fight with his compatriot, Jamie MCCANNEY, for the final victory. But the official Yamaha rider slowed as the day went on (perhaps due to the collarbone injury suffered in Pietramurata). The metronomic accuracy of the reigning Junior World Champion, FREEMAN, allowed him to widen the gap and eventually win by 20 seconds. For his part, Antoine BASSET (F – Gas Gas) took his 7th podium of 2018 ahead of Davide GUARNERI (I – Honda RedMoto), who returned after the nasty back injury he suffered in Portugal, and the astonishing Wild Card, Diego NICOLETTI (I – Husqvarna).

In the big E3 class, Steve HOLCOMBE left no chance for his rivals. As proof, Christophe NAMBOTIN (F – Gas Gas) who took second place was relegated by more than 3 minutes 20 seconds! At ease on this type of terrain, Danny MCCANNEY (GB – Gas Gas), for his part, could not resist the fury of the Basque Anthony GESLIN (F – Beta), also known to be very comfortable in mud. The official Gas Gas rider finished just off the podium after taking a penalty. Romain DUMONTIER (F – Yamaha) and Nicolo MORI (I – Beta) completed the Top 5.

First Kiwi Victory!
Matteo CAVALLO (I – Beta Boano) won again in Junior even though he took a very long time struggling to close the gap on his great rival Andrea VERONA (I – TM). He now has 29 points ahead of the factory TM rider but, with the example of SALVINI, we know that everything can change overnight in Enduro. Behind this “untouchable” duo, it was Jack EDMONDSON (GB – Sherco) who climbed onto the last step of the podium at the expense of an invigorated Leo LE QUERE (F – TM)…

In J1, it was therefore Andrea VERONA who won in front of Léo LE QUERE (who took his first podiums of the season) and Kirian MIRABET (E – Honda). While Matteo CAVALLO topped J2 in front of EDMONDSON and the Czech sensation Krystof KOUBLE (KTM).

Finally in Youth 125cc, Ruy BARBOSA (CL – Husqvarna), current leader, had to concede defeat in conditions he’s not very comfortable in! The Chilean could not cope with the pace of New Zealander Hamish MACDONALD (Sherco), who for the first time in his career won a day in the World Championship and became the first New Zealander to win a round of EnduroGP. Dan MUNDELL (GB – Sherco) made put another CH Racing team Sherco on the podium, while the Belgian Matthew VAN OEVELEN (Sherco) was forced to retire with bike troubles on the first lap…

This first day of the Acerbis Grand Prix of Italy kept all its promises, although to chagrin of Alex SALVINI and all the Italians tifosi (fans) present in Edolo. But nothing is over yet and the stars of EnduroGP will have to tackle it all again tomorrow with the three magnificent special tests laid out by the Moto Club Sebino. Will SALVINI be able to react or will he lose more ground on his rivals?

Steve HOLCOMBE : “My plan went perfectly, although it was helped by the mechanical problems of Alex (SALVINI) … it was a pity that we could not fight together throughout the day. But a victory is a victory and I’ll take it willingly… Tomorrow is another day and my first goal will be to increase the gap a little more.”

Brad FREEMAN : “Steve was really strong today but my main goal was to win my category and I did just that. It was a nice duel with Jamie as it has been from the beginning of the season but I had to grab more points, we are never safe from DNFs in this sport as we’ve seen… ”

Eero REMES : “Like me in Estonia, the mechanics let Alex down and that’s a shame. But it benefits me and together with Loïc, we are back in the running. The rest of the season will be more interesting. I’m satisfied also with my podium in the EGP class, despite some mistakes in the last lap! ”

Thomas OLDRATI : “Finally! I’m really proud to be on the Enduro 2 podium in front of my home crowd and with the Honda! The day has not been too difficult and we must pay tribute to the Moto Club for their fabulous work… Tomorrow is another day and I hope I can taste the podium again… ”
Alex SALVINI : “It’s impossible not to be disappointed when today ended with a problem like this… But it’s the game, everyone knows it and it can happen at any time. I must turn the page and focus on tomorrow. “