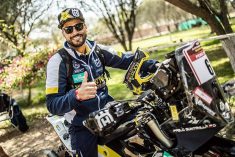 With the 2018 FIM Cross-Country Rallies World Championship entering its fifth and final round this week in Morocco, Pablo Quintanilla has his eyes set on successfully defending his title at the 2018 Morocco Rally. Enjoying an eight-point lead at the top of the provisional standings the Rockstar Energy Husqvarna Factory Racing rally star is aiming for a good overall result at the five-stage event, which he hopes will allow him to secure the FIM Cross-Country Rallies World Championship title for a third consecutive year.

Following a stellar season of rally racing, Pablo Quintanilla is well prepared for this last event of the championship in Morocco. Winning the opening competition in Abu Dhabi, Pablo went on to claim two podium results at rounds three and four in Chile and Argentina respectively. Enjoying a good feeling aboard his FR 450 Rally machine, the Chilean racer will also be looking to make the most out of the five-stage rally in Morocco in preparation for the upcoming Dakar Rally.

Pablo will be joined at the Morocco Rally by his Rockstar Energy Husqvarna Factory Racing team partner Andrew Short. Impressing the global rally community with his podium result last month at the Desafio Inca rally in Peru, the American is looking forward to continuing to gain experience this week in Morocco.

Kicking off this Thursday, October 4, the 2018 Morocco Rally features a short Prologue and five more long rally stages in the Saharan Desert. In a total of 1,907km to be covered in six days, the total distance of the rally’s timed specials is 1,225km.

Daniel Trauner – Rockstar Energy Husqvarna Factory Racing Rally team manager: “The Morocco Rally is a very important race for our team and we are more than ready for the challenge. With this being the last big test before the 2019 Dakar, it is crucial that we all give our best this week in Morocco. We’ve made some improvements and some small changes in our preparation as a team and we are hoping these will work for the best. Also, there is a new organiser for this year’s Morocco Rally and we expect some details to be different. There is some new features but overall it still is a big challenge for all competitors.

All the big teams and the best riders will be present and this will also allow us to see where we’re at against our competition. For sure our major goal is to help Pablo clinch his third title with our team. Pablo is feeling strong both physically and mentally at the moment and I believe he has what it takes to make it happen. He is also highly motivated and this is very positive for the coming days. As for Andrew, he impressed us all with his top-three result in Peru. He’s been making some steady progress and we want to see him continue with that same momentum. He has closed the gap to the elite riders and I personally believe he will be a strong asset for our team in the upcoming Dakar.”