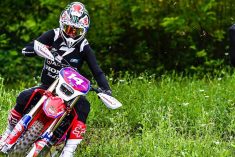 A Long Awaited Season Finale!
After a season of almost 8 months, which has experienced snow and ice, rain, mud, heat and dust, it’s now time for the FIM Maxxis World Enduro Championship to end! And as in 2017, the grand finale will take place in Germany, very close to Berlin, in Rüdersdorf.
Although we have already crowned the overall Junior World Champion and Youth 125cc champion at the French round, this German GP retains a lot of suspense for the crowds of fans with the four senior titles still to be awarded!

Rüdersdorf, Capital of Enduro
After the well-known MSC Rund um Zschopau last season, MC Woltersdorf e.V in ADMV has the difficult task of organising the final round of 2018!
“We are really pleased to be able to go to Germany for the second year in a row!” said Alain BLANCHARD “This country breathes Enduro and it was important for us to have another round here for the riders and for the public who are always very warm and welcoming!” In addition to their traditional Novemberpokal, the club run by Jörg LESSING and President Harald TÄGER, hosted the final of the European Enduro Championship in 2015 and was also one of the linchpins of the organisation in 2012 of the very popular Six Days of Enduro. At the same time, MC Woltersdorf will organise the final round of the 2018 German Championship.

It is therefore with an experienced Moto Club that the FIM and ABC Communication will work to set up a beautiful finale to 2018. For their very first organisation of a World Championship race, MC Woltersdorf wanted to go all out to give a spectacular lap to the stars of EnduroGP. On Saturday and Sunday, they will leave the Industrial Zone of Tasdörf, and head to a 100% natural Technomousse Xtreme Test located at the Arena Kesselsee… Then, they will have to face the Maxxis Cross Test. Finally, the lap will end at the Arena Kesselsee, with a typically German X-Rocks Enduro Test, in the woods combining stony and sandy sections. On Friday evening, the Akrapovic Super Test will start at 19.00. This inaugural stage will also take place at the Arena Kesselsee.

With a population of around 15,000, Rüdersdorf bei Berlin is a municipality in the district of Märkisch-Oderlanden in the heart of Brandenburg. Located only 30 km from Berlin, Rüdersdorf is very popular for its limestone which has been used for construction since the Middle Ages.

HOLCOMBE Champion on Saturday?
Steve HOLCOMBE (GB – Beta) was 14 points off the title on the first day in France, but then everything changed for his rival, Alex SALVINI (I – Husqvarna) who suffered an electrical problem the next day… The Jolly Racing Team rider is now 30 points behind his former teammate at Beta Factory. The task is therefore very difficult, almost impossible for SALVINI.
With such a big advantage, there is no doubt that HOLCOMBE will want to finish the job on Saturday and raise the crown of EnduroGP World Champion one day before the end of the season. But as we have seen with SALVINI during this year, nothing is done yet and no one is safe from a mechanical problem or injury.
Behind this pair who have shown a very high level during the 8 Grand Prix of the season, Brad FREEMAN (GB – Beta Boano) and Eero REMES (SF – TM) will have to give everything to decide who will take the last step of the overall podium. Indeed, only 2 points, to the advantage of the British, separate them.
On their side, Outsider Yamaha Official riders Jamie MCCANNEY (GB) and Loïc LARRIEU (F) will also compete for the last place in the Top 5 in the EGP category. They will have to pay attention to Christophe NAMBOTIN (F – Gas Gas), in ambush, who is on top form in the latter part of the season. He proved this with a strong second place on Sunday in France.
Danny MCCANNEY (GB – Gas Gas), Thomas OLDRATI (I – Honda RedMoto) and Antoine BASSET (F – Gas Gas) will also seek to secure their place among the 10 fastest riders of the year while the local riders, led by Edward HÜBNER (D – KTM), Christian BROCKEL (D – KTM), Davide VON ZITZEWITZ (D – KTM) and Nico RAMBOW (D – KTM) will be keen to shine in front of their audience.

In addition to the EnduroGP title, Steve HOLCOMBE also has the opportunity to finish the job in Enduro 3. The Brit is 36 points ahead of Christophe NAMBOTIN and 44 ahead of Danny MCCANNEY. And it is hard to see how the Frenchman or the Manxman could prevent the coronation of HOLCOMBE on the first day.
Indeed, the Beta Factory rider has given only four day victories to his rivals this year. He is also on an impressive streak of 8 straight wins before arriving in Rüdersdorf.
While the title seems almost assured for HOLCOMBE, we should watch out for a great battle for the place of Vice-World Champion between Gas Gas team-mates NAMBOTIN and MCCANNEY.
This duel will also be watched closely by Beta France rider Anthony GESLIN (F) who has taken advantage of the slightest mistake from the two Gas Gas Factory riders all season long and has often been on the podium. Already assured of 4th place, the Basque rider will be keen to finish his excellent season with one or two more podiums.
For his part, Romain DUMONTIER (F – Yamaha) will seek to consolidate his place in the Top 5 of the category, but beware of Nico RAMBOW and Björn FELDT (D – KTM) who will be pushed by the home crowd…

Can REMES Take SALVINI Down to the Wire?
In Enduro 1, Brad FREEMAN will also seek to secure the title on Saturday. The Beta Boano rider is 28 points ahead of his compatriot Jamie MCCANNEY and can therefore “afford” to finish in 5th place if the Manxman wins the first day of racing. But he too will have to be careful not to encounter mechanical problems or injuries when pushing at the maximum!
Deprived of podium in front of his fans three weeks ago in France, Antoine BASSET will be keen to get back on the box to conclude a very solid season which has seen many podiums from the Gas Gas rider. But he will have to face a rejuvenated Davide GUARNERI (I – Honda RedMoto) back to its best level and ready to pick up 5th place in the standings currently occupied by Manuel MONNI (I – Suzuki).

The electronic failure of Alex SALVINI in Methamis (France) has reopened the fight in Enduro 2. “SALVO” now has only 14 points on Eero REMES and 21 on Loïc LARRIEU. Everything is still possible and the final decision could well be played in the last special tests on Sunday.
Especially as riders such as Thomas OLDRATI and Christophe CHARLIER (F – Beta) have the weapons to come in and interrupt one of the three candidates for the title.
Pay attention also to Deny PHILIPPAERTS (I – Beta Boano) who will seek to ensure a good finish to his season.
Without counting the local heroes, Edward HÜBNER, Davide VON ZITZEWITZ and Christian BROCKEL who will want to prove that they have the weapons to fight with the cream of the crop in World Enduro.

The interest will of course be less in Junior since Matteo CAVALLO (I – Beta Boano) secured the title in France. But no doubt he will want to end the season in style with 8 wins in a row while his runner-up, Andrea VERONA (I – TM) will already seek to mark the spirits for next season where he will certainly be among the favorites to succeed CAVALLO.
It will also be necessary to keep an eye on the battle between Jack EDMONDSON (GB – Sherco), Davide SORECA (I – TM), Theo ESPINASSE (F – Sherco) and Joe WOOTTON (GB – Husqvarna). These four riders all have the ability to fight for the last step of the overall podium.

Same story in J1 and J2 where Andrea VERONA and Matteo CAVALLO have already finished the job. But this German GP should be interesting for the other two places on the podium of both categories. ESPINASSE, Kirian MIRABET (E – Honda) and Antoine MAGAIN (B – KTM) could all claim second place in J1 as can EDMONDSON, SORECA and WOOTTON in J2.

In the 125cc Youth, while Ruy BARBOSA (CL – Husqvarna) did what needed to be done in France and will arrive in Germany with the World Champion’s title, it remains to be determined who will be the Vice World Champion in 2018.
Here again, three men – all on Shercos – can claim this place: Dan MUNDELL (GB – Sherco), Hamish MAC DONALD (NZ – Sherco) and Matthew VAN OEVELEN (B – Sherco). While the Brit is in charge for the moment, beware of the New Zealander who has grown in confidence and speed with each round and will seek to become the first New Zealander to get a top three finish in the Enduro World Championship.
Belgium’s Matthew VAN OEVELEN can also make history for Enduro in his country if he finishes on the podium of the category.

Womens Cup: LANCELOT the Favourite?
Finally, on the occasion of this German Grand Prix we will have the only round of the Enduro Women’s World Cup. And while the Queen of the Category Laïa SANZ (E) withdrew and the defending champion Maria FRANKE (D – KTM) had to sit out after becoming a mother a few months ago, the category still has a lot of appeal.
Of course, the 2017 Vice-Champion Jane DANIELS (GB – Husqvarna) is a favourite, as is Sanna KARKKAINEN (SF – KTM) but the arrival of the WMX World Champion Livia LANCELOT (F – Honda) should bring even more competitiveness to the Feminine category.
In preparation for the Six Days in Chile, the Frenchwoman will certainly look to add a new title to her already impressive list, and could succeed Ludivine PUY (F) as a French winner of the EW crown…
Add to this, the participation of Nieve HOLMES (GB – Sherco) as well as that of the Spanish team composed of Mireia BADIA (Husqvarna), Alba VILAPLANA (Husqvarna) and Humi PALAU (Husqvarna) and we should have a very interesting category.
Also note the presence of a Japanese team represented by Mami MASUDA (Beta), Seiko SUGAWARA (Yamaha) and Sakoru NAKANISHI (Beta), one year after that of Ogami TOMOKI in EGP.

It is therefore very close to the German capital that the last act of a breathtaking 2018 season will be held. So much sacrifice and intensity after almost 8 months now comes down to this final round where everything remains to be done in the four Senior categories and the Womens category… see you this weekend in Rüdersdorf for a climactic finale!