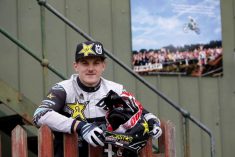 Marking the 35th edition of the Swedish classic, this year’s Gotland Grand National is set to welcome over 3000 competitors as the battle intensifies to become the ULTIMATE ENDURO CHAMPION. A ‘must-do’ event on the Swedish racing calendar, the three-hour Cross-Country race – situated on the small island of Gotland – attracts thousands of annual competitors. Its rocky terrain, with technical tree rooted forestry tracks and marshy wetlands, ensures the 22-kilometre long course provides a physically demanding race for all.

The third series leader in as many races, Billy Bolt currently holds the upper hand over his championship rivals. Winning the opening event back in May, Bolt has found rejuvenated form during the second half of the season. With back-to-back podium results at Red Bull 111 Megawatt and the Hawkstone Park Cross-Country the Brit looks to build on his advantage with a strong performance in Gotland.

Sitting just 125 points behind Bolt – with a remaining 2000 points up for grabs – Manuel Lettenbichler is a close second. The German privateer has been sensational this season proving himself as a championship contender regardless of the terrain or Enduro discipline faced.

Weighing into the title fight with a dominant victory at round six in Great Britain, Josep Garcia will also be a rider to watch in Sweden. The Classic Enduro specialist was blisteringly fast during the Hawkstone Park Cross-Country and will be an expected front runner. Aiming to settle for nothing less than a win, Garcia also knows that the sizeable entry list in Gotland could seriously enhance his title hopes should his rivals have any problems.

Also enjoying a late championship charge, Poland’s Taddy Blazusiak (KTM) is fifth in points and could easily play spoiler to Bolt, Lettenbichler and Garcia. A fierce competitor and one never to be counted out, Blazusiak will be aiming for the podium in Sweden. Runner-up to Garcia at round six, Britain’s Nathan Watson (KTM) is another rider finding his groove late in the season. Favouring the faster Cross-Country riding, Watson knows that a potential debut WESS win is within his grasp.

With 3000 competitors taking to the start line, local knowledge is set to be a key factor in the outcome of the race as the leading riders manage both track hazards and high volumes of traffic. Winner in 2017, Norway’s Kjetil Gundersen will be a rider WESS regulars will have to watch come race day.

So too will Swede Albin Elowson. Runner-up in 2017 – his best Gotland Grand National result to date – Elowson also finished 11th at the Tréfle Lozérien AMV and will aim to show his speed once again in this year’s WESS championship.

With eight Gotland Grand National victories to his name, Mats Nilsson (SWE) is the most successful rider in the history of event. Despite claiming his debut win back in 1997, 49-year-old Nilsson finished on the podium in 2017, proving age and experience is every match for youthful exuberance. Fourth last year, Rikard Hansson (SWE) will look for another top result, while all eyes will be on Joakim Ljunggren – one of Sweden’s most successful Enduro riders – to see if he can finally win his first Gotland Grand National.

The seventh and penultimate round of the 2018 World Enduro Super Series – Gotland Grand National – takes place this weekend, October 26/27.

GGN is the world’s largest single day enduro
2016 was the largest recorded attendance with 3172 competitors
The course is 22 kilometres long with a three-hour race distance for all classes
Swede Mats Nilsson is the event’s most successful rider with eight victories
Pela Renet has won the GGN four consecutive times from 2011-2014
Categories range from Youth to Elite, with even a class for military bikes