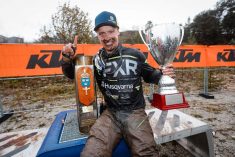 Gotland, Sweden – October 27, 2018 — Swedish riders have filled the podium at a wild and muddy Gotland Grand National – round seven of the World Enduro Super Series – where Albin Elowson (Husqvarna) claimed victory.
With conditions turning incredibly muddy for the 35th edition of the iconic event, it was the Swedish riders who faired best in the deteriorating conditions. Claiming his debut Gotland Grand National victory, Albin Elowson secured a commanding win over Yamaha’s Robert Kvarnstrom and Ken Bengtson (Husqvarna).

After a troubled opening lap, Rockstar Energy Husqvarna Factory Racing’s Billy Bolt (GB) recovered well to finish 13th overall and maintain his overall lead in the WESS championship standings with one round remaining.

Renowned as the world’s largest Enduro race, over 3000 riders competed in this year’s Gotland Grand National – round seven of WESS. Friday kickstarted the proceedings where up to 600 Hobby riders enjoyed near-perfect conditions. However, the weather turned and from Friday evening onwards the rain fell hard on the Scandinavian circuit, ensuring that the 35th GGN would be remembered as one of the wettest in history.

As the Elite, Senior and Junior class riders blasted off the start line at 12.30pm, thousands of riders jostled for position in the mud. Clearing the early carnage safely, Elowson moved into the race lead on lap one followed by Kvarnstrom. The duo then went head-to-head, pushing a pace that quickly saw them distance themselves from the ensuing pack. By midway, Elowson showed no signs of slowing down and pulled clear of Kvarnstrom to claim a convincing win at the end of the sixth and final lap.

Despite a late push by Kvarnstrom, the Yamaha rider had to settle for the runner-up position, while Bengtson rounded out the podium in third.

For WESS the title contenders, Spain’s Josep Garcia crossed the finish line in 12th to slightly close the gap to series leader Bolt, who finished 13th. Although holding 25th with one lap remaining, a crash in the closing stages of the race pushed Manuel Lettenbichler (KTM – Germany) back to 43rd overall.

With just the final round of the championship remaining, Bolt extends his advantage over Lettenbichler to 275 points. Garcia, in third, closes to within 445 points of the second placed Lettenbichler. Blazusiak’s fourth place result at GGN sees him move up to fourth overall, but more importantly he now sits just 25 points behind Garcia as the race to become this year’s ULTIMATE ENDURO CHAMPION soon moves to The Netherlands for Red Bull Knock Out.

The World Enduro Super Series concludes with the eighth and final round – Red Bull Knockout –on November 10.

Albin Elowson (Husqvarna – SWE): “I’m so happy to take the win here in Gotland. I knew I had the speed before the race, but you never know what can happen around here, especially in these conditions. I got a decent start and tried to make some passes in the early chaos. I had a good fight with Robert Kvarnstrom but after the first pit stop I was able to open up a small gap and managed to maintain that lead for the whole race. Overall, I felt good and was happy with my pace. I went through a lot of goggles – that’s one of the main things at this race, you have to keep your eyes clear in order to ride properly. Also, a big thanks to the team. They were great and both pit stops were excellent. Finally, it’s good to be able to show what I am capable of – especially with the GGN now part of WESS. I know I have the speed, I just have to build my confidence a little and hopefully I can get some more good results in the future.”

Robert Kvarnstrom (Yamaha – SWE): “That was a really tough race. It was so wet and so muddy. I think it was one of the toughest editions of GGN that we’ve ever done. I got a good start and was running with Albin Elowson early on, but a few mistakes and some issues with the traffic cost me time and he gapped me. After that I just rode my own race. I found some more speed towards the end, but it wasn’t quite enough to pressure Albin for the lead. Congratulations to him for the win – I’ll have to come back next year and fight for the victory again.”

Taddy Blazusiak (KTM – POL): “To finish fourth for my first time riding this race and in these conditions is a result I’m pleased with. GGN is a unique race and one the Swedish riders clearly excel at. With the weather turning bad, it was always going to be difficult to match their experience in this type of mud. But I feel we did a good job – we worked well as a team to adapt to the changes and challenges we faced, as they happened. In total I only had two small crashes, but I did struggle with keeping clear vision especially in traffic and that cost me some time. But like I said, fourth is a good day and I’m happy with that.”

Billy Bolt (Husqvarna – GB): “I had a tough first lap. Another rider crashed in front of me and I managed to stop, but then someone else crashed into me from behind and we were all stuck in a mud puddle. I got going again but got mixed up in another crash and went down again – that’s when I broke the throttle tube. I made the mistake of stopping to try and fix it and lost so many places as a result. After the first pit stop I was able to push on a bit more and regain some places. I’m a little bit disappointed not to have finished higher – I think without the problems I could have – but importantly I have stretched my lead at the top of the standings as we now look towards the final round in Holland.”