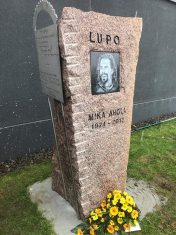 The monument is located in the place where the final cross of 1996 ISDE was held. On that race Finland won for the first time the World Trophy with its team that included Mika AHOLA, Kari TIAINEN, Jani LAAKSONEN, Pekka VILJAKAINEN, Petteri SILVAN and Vesa KYTÖNEN.