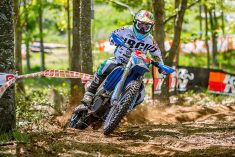 Back on the Trail to Santiago de Compostela!
Just a week after a Portuguese Grand Prix which was masterfully organised by the Usprigozus Vilarandelo, the EnduroGP circus heads to Santiago de Compostela in Galicia in the north-west of Spain for the second round of the Iberian tour!
For the second consecutive year, the Spanish Grand Prix will be organised by the Moto Club Movete Na Moto Lalin with, of course, support from the national federation, the RFME.

Ready to Build on 2018!
Once again, José Angel ARCA CANDA and all the volunteers from the Moto Club MNM have gone all out to create a 65km lap around the “holy” city of Santiago de Compostela, the stars of EnduroGP will have to take on this lap three times each day. The paddock and race offices will be located at Santiago’s “San Lorenzo” Stadium, as will Friday night’s Akrapovic Super Test and the Technomousse Xtreme Test. During the weekend, the riders will leave the “San Lorenzo” stadium and head for the Maxxis Cross Test located near the industrial area “A Sionlla”, which will take about 9 minutes. Afterwards, they will go to the Champion Enduro Test, also located in “A Sionlla”. This test is about 10 minutes long with ups and down and some tricky sections among the trees. Finally, the protagonists will complete the lap with the Technomousse Xtreme Test. There will also be some spectacular areas on the liaison sections which the organisers will point out to the public.

Santiago de Compostela is located in Galicia and more specifically in the province of A Coruña. It is a city of about 96,000 inhabitants, and is a place of pilgrimage on a par with the likes of Rome or Jerusalem. Today, Santiago de Compostela is a city with many monasteries and churches, as well as a lot of famous monuments such as the Hostal Dos Reis Catolicos or the Pazo de Raxoi, as well as the tomb of Saint Jacques.

Can FREEMAN Do it Again?
After three days of racing, the 2018 EnduroGP World Champion has finally been defeated! Last weekend Brad FREEMAN (GB – Beta Boano) became the first rider to beat Steve HOLCOMBE (GB – Beta) in 2019!
But the factory Beta rider still has an 8 points advantage and there’s no doubt that he’ll be quick to overcome this “little disappointment”…
For FREEMAN, after this brilliant victory last Sunday, it will be time to prove that he has what it takes to fight for the EnduroGP title throughout the season.
But this weekend will not only see a duel between HOLCOMBE and FREEMAN… Alex SALVINI (I – Honda) was back to his strong and speedy self in Portugal and he has already hinted that he’s ready to get involved in the EnduroGP battle.
We also have the likes of Danny MCCANNEY (GB – TM), who had a slightly quiet weekend in Valpaços despite a double podium in E3, he’ll be sure to enjoy the predicted wet and muddy conditions.
Loïc LARRIEU (F – TM) had a horribly unlucky weekend in Portugal, and he’ll be keen to put it all behind him and return to the front of the field in Santiago.
Keep an eye out for Christophe CHARLIER (F – Honda), Davide GUARNERI (I – Honda), Matteo CAVALLO (I – Sherco) and Giacomo REDONDI (I – Husqvarna) too, they were all close to the podium in Portugal. And of course, there’s Eero REMES (SF – Yamaha), who will certainly be keen to catch up after a tricky Portuguese GP…

Undefeated in Enduro 1, Brad FREEMAN will certainly seek to extend his winning streak but will have to respond to the attacks of GUARNERI and CAVALLO…
Meanwhile, Kirian MIRABET (E – Honda) will have to show that his 4th place on Sunday was not a fluke, while Thomas OLDRATI (I – Honda) will want to taste the Cava again.
Finally, Rudy MORONI (I – KTM) and Patrik MARKVART (CZ – KTM) will also try to get closer to the Top 5.

It’s a similar story in E3 with Steve HOLCOMBE ultra dominant. But TM’s MCCANNEY will want to defeat his compatriot again, just as he did in the Italian Championship a few weeks ago.
Behind the two Brits, we’re sure to find another exciting the battle for third place between Anthony GESLIN (F – Beta) and David ABGRALL (Beta). We’ll also see Simone TRAPLETTI (I – Gas Gas) return, and he would love to get his first World Championship podium.

Over in Enduro 2, the battle for the top will be fierce between SALVINI, CHARLIER, LARRIEU, REMES and REDONDI… these 5 riders all have the potential to take victory and all of them will be keen to take home the Leader’s Plate on Sunday evening!
CHARLIER proved in Spain that he can now be regular contender, while the other three aforementioned riders have all had bad luck during the first four days of the season. LARRIEU will have the ‘advantage’ of being fresher and less tired than his rivals as he was ruled out of riding by bike issues in a relentlessly tough Portugal.
Chilean Benjamin HERRERA (Beta) will also be ready to take advantage of any misfortune suffered by the ’top’ men. His consistency sees him sitting third place in the standings. There are yet more riders waiting in the wings for their moment to shine; Antoine BASSET (Husqvarna), Hugo BLANJOUE (KTM), Davide SORECA (I – Honda), Joe WOOTTON (GB – Husqvarna), Diogo VENTURA (P – Honda) and Edward HUBNER (D – KTM).

VERONA & MACDONALD, Can They Be Toppled?
In the Junior classes, Andrea VERONA (I – TM) left Portugal with two more superb victories and is now more than 25 points ahead of his pack of rivals Enric FRANCISCO (E – KTM), Théo ESPINASSE (F – Sherco), Jack EDMONDSON (GB – Sherco) and Wil RUPRECHT (AUS – Yamaha)…
While RUPRECHT seemed to have the skills and the weapons to fight the talented Italian, his race weekend in Portugal did not go to plan and pushed him a little further from his first World Championship victory…
Very close to winning overall on Sunday, FRANCISCO shows that he has progressed rapidly and he’ll no doubt receive an extra boost from his home fans this weekend.
But of course, nothing is certain, and this pack of keen and quick youngsters will be ready to give their all.

In J1 VERONA has 16 points on ESPINASSE and 22 on RUPRECHT. But watch out for Thomas DUBOST (F – KTM), who took his first podium in Valpaços, as well as Matthew VAN OEVELEN (B – Gas Gas) and Roni KYTÖNEN (SF – Husqvarna).

While in J2, with two fresh victories, Enric FRANCISCO arrives at his national GP 6 points ahead of EDMONDSON! The duel between the Spaniard and the Brit should be very interesting during the two days of racing, especially as they could well be hampered by riders such as Ruy BARBOSA (CL – Husqvarna), Emanuele FACCHETTI (I – Gas Gas) and Léo LE QUERE (F – Sherco).

Finally, in Youth 125cc, Hamish MACDONALD (NZ – Sherco) has left little chance for Claudio SPANU (I – Husqvarna), Matteo PAVONI (I – Beta Boano), Alejandro NAVARRO (E – Husqvarna) and Dan MUNDELL (GB – Sherco).
This GP will be another opportunity to see if these four riders are able to react and hold off the rise of Fabrizio AZZALIN’s protege, or if we’ll see new names join the podium.

This Spanish Grand Prix is highly anticipated after a GP of Portugal which was full of big battles, big blows, and unexpected twists. There is no doubt that thousands of Spanish fans will gather on the three tests to cheer on the World Enduro elite. Let’s also hope that the Moto Club Movete Na Moto have put together all the elements to make this third round of the season a big festival in the north-west of Spain.