Danny MCCANNEY Does it By a Fraction! 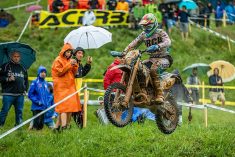 The weather had its say on Day 1 of competition at the 5th round of the Maxxis FIM Enduro World Championship. The legendary ‘Valli Bergamasche’ race is known for being tough and unpredictable, and this was certainly the case on Saturday as very violent storm swept through the Rovetta area all day long. This altered the race conditions drastically and EnduroGP’s competitors spent a hellish day between rain, mud, and thunderstorms.

Four men shared the top spot over the course of the day, taking it in turns to lead. Matteo CAVALLO (ITA-Sherco), Thomas OLDRATI (ITA-Honda), Steve HOLCOMBE (GBR-Beta) and Danny MCCANNEY (GBR-TM) all had their time in the spotlight, but it was the Manxman who took the spoils at the end of the long and punishing day.

The 2018 Junior World Champion, CAVALLO took control of the race at the start of the day, leaving Thomas OLDRATI in his wake, with the local rider overwhelmed by the presence of his many supporters. The two Italians were followed closely by a rider who loves these kind of conditions: the quadruple World Champion, HOLCOMBE. The Brit seemed on great form despite his health woes.

The four protagonists had an absolutely fantastic battle over the three laps which made up today’s racing. The top position alternated between CAVALLO and OLDRATI, and then back to HOLCOMBE. But it was Danny MCCANNEY who put an end to this constant switch up when the factory Beta rider pipped his rivals by 6 thousandths of a second. His compatriot HOLCOMBE had to settle for second, while Matteo CAVALLO completed the top three overall. OLDRATI finished 4th ahead of Loic LARRIEU (FRA-TM).

Further down the leaderboard was EnduroGP points leader Brad FREEMAN (GBR-Beta) who had to seriously grit his teeth all day and deal with immense pain. The young Brit limited the damage by finishing an amazing 7th. Also riding injured is Alex SALVINI (ITA-Honda) who took a valuable 9th place.

After his victory in last night’s Akrapovic SuperTest, Antoine MEO (FRA-Honda) finished 11th on the day, more than a minute and a half down on the winner.

In the E1 category, Matteo CAVALLO took his first ever senior class win in front of his adoring fans. Thomas OLDRATI and an ever impressive Brad FREEMAN rounded out the top three.

In E2, LARRIEU was able to overthrow SALVINI and take an important victory ahead of Christophe CHARLIER (FRA-Honda) and the ultra-consistent Benjamin HERRERA (CHL-Beta).

In Junior, TM Racing rider Andrea VERONA (ITA) took his 8th victory out of a possible 9. After a ‘blip’ on Day 2 in Greece where he ‘only’ finished 3rd, the Italian rider was back on top form. The weather conditions and the state of the tests did not prevent VERONA from being dominant. He won by more than a minute ahead of Theo ESPINASSE (FRA-Sherco). Britain’s Jack EDMONDSON (GBR-Sherco) completed the podium.

The J1 category was also taken by VERONA, ahead of ESPINASSE and Roni KYTONEN (FIN-Husqvarna).

In J2, we saw an excellent victory from EDMONDSON. Chile’s Ruy BARBOSA (CHL-Husqvarna) and local man Emanuele FACCHETTI (ITA-GAS GAS) filled out the rest of the podium.

In the 125cc Youth Cup, Matteo PAVONI (ITA-Beta) took his second victory of the season, this time in front of his home fans. Hamish MACDONALD (NZ-Sherco), returning from injury made a great comeback with 2nd place despite still suffering physically. Sardinia’s Claudio SPANU (ITA-Husqvarna) gave his all in the final test of the day to take a podium on Italian soil.

One race after David KNIGHT (GBR-TM) took the Open Senior title, the Champion Lubricants Enduro Open World Cup saw another rider crowned. Portugal’s Goncalo REIS (GAS GAS) is 2019’s Open 2-Stroke winner. Joining him on the podium were Nico RANBOW (GER-KTM) and Benet GOMEZ (ESP-Gas Gas)
Open 4-Stroke belonged to Robert RIEDEL’s (GER-KTM) today as he took a surprise win in front of Pietro Enrico COLLOVIGH (Sherco) and Tom ELLWOOD, who could only managed 3rd with his Kawasaki.
David KNIGHT kept his pace and took another win in the Senior category. Werner MÜLLER (AUT-KTM) and Duccio GRAZIANI (ITA-Yamaha) were 2nd and 3rd respectively.

Despite the party atmosphere reverberating around the hills of Rovetta and Clusone, a good night’s sleep will be in order for the exhausted riders. Day 1 at the ‘Valli Bergamasche’ tested everyone to their limits – especially those brave riders who are already injured. Sun is promised for Sunday, but whatever the weather, this Acerbis Grand Prix of Italy 2019 will go down in history.

Danny MCCANNEY (GBR-TM): “I’m thrilled, this first EnduroGP win means lot to me. The day began badly – my chain came off in the first Extreme test, but when the rain started pouring down I felt very comfortable with the conditions. I am really happy with today’s result!”

Steve HOLCOMBE (GBR-Beta): “I can just say that finding myself here and talking about my podium is my greatest satisfaction. It’s amazing that I was able to fight with these guys, given that I am supposed to be at home resting due to my illness. But I want to continue fighting by taking every available point.”

Matteo CAVALLO (ITA-Sherco): “What a day! I have not often experienced this type of racing conditions in Italy, it was crazy. But I’m so happy to take my first E1 win, and to have been running at the front of EnduroGP during the day. Now that I have tasted victory I want more! But for now I am very tired, I think i’ll go to bed immediately and only get up again tomorrow morning!”

Brad FREEMAN (GBR- Beta): “I feel very bad, I am in such a lot of pain. My condition got worse every turn and the last lap was really hard. I have to really mentally prepare for tomorrow’s race day.”

Loic LARRIEU (FRA-TM): “I’m a guy from the South, I’m not used to so much rain or being cold, especially in the summer! The day was really complicated, I started off badly but I managed to recover and I’m happy to win in E2, when I really thought that I was going to finish a long way down the order.”