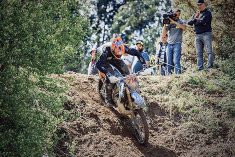 It might seem an eternity away to all fans but, actually, it’s already time to prepare for the first of the two races which will decide the Champion in most of the categories: Uhlírské Janovice.

There will be many face-offs this September.
In Enduro 1 Brad FREEMAN (GB – Beta Boano) will have to fend off his pursuers Thomas OLDRATI (I – Honda RedMoto) and Matteo CAVALLO (I – Sherco) who will want to make the most of any mistake he might make. In Enduro 2 four riders still stand a chance: Alex SALVINI (I – Honda RedMoto) is ready to defend himself against Loïc LARRIEU (F – TM), Christophe CHARLIER (F – Honda RedMoto) and Benjamin HERRERA (CL – Beta) no matter what. Steve HOLCOMBE (GB – Beta) will not be able to predict how best to approach the race and defeat Daniel MCCANNEY (GB – TM) and Antony GESLIN (F – Beta) who are chasing him in the general rankings of Enduro3.
Brad FREEMAN is in the lead also in EnduroGP where he will have to compete with HOLCOMBE, who is second and only 4 points behind, while Daniel MCCANNEY is distanced by 23 points.

After the European Championships in 2014, these Central European lands welcome the World Championships, giving a voice to a region where many great champions of the past were born. Now, the region will host the best riders of the world to race each other on a breath-taking track.

The Czech Republic is a land of Enduro riders. The national scene is very lively and, this year, Uhlírské Janovice will be its climax as many national drivers like JININ, MSENO, SUMPERK, PLASY, and HROBCICE will be competing on a site which is perfect for the discipline.
The race course might not be as extreme as Valli Bergamasche, but Uhlírské Janovice has a different philosophy: without sacrificing the quality of the competition, it will be a real, and challenging, EnduroGP.
Three laps every day of the competition, each of them more than 65km long which amounts to over six hours in the saddle per day. In other words, we already know that the riders will face another difficult challenge at the Czech GP.

The Enduro Klub and the International Federation are already working on the perfect circuit for September and, obviously, also the special tests will be prepared to the smallest detail.
We cannot wait for them to be ready but what we do know is that they will take place in and around the forests which surround Uhlírské Janovice.
The Extreme Test is not far from the village itself and the Enduro Test already promises to be one of great difficulties because of its length, the rocks and roots on which it takes place, as well as the Cross Test with not only ups-and-downs, but also long stretches along fields and in and out of the woods: it seems that the pros competing for vital points will meet their match and that the amateurs will be able to enjoy a track, which, even if not extreme, has many technical challenges.

Only the races? Not really.
The competition takes place only 20 minutes from Kutná Hora, the regional capital of Central Bohemia and one of the most popular destinations with the tourists who arrive every year to admire the sights of this beautiful area with a rich history.
The old town of the small city became part of UNESCO’s world heritage list in 1995 in order to protect its charm and patrimony.
From the rocks, roots, and extreme passages of one of the most beautiful Enduro races of the year to landmarks not to be missed like the Cathedral of Saint Barbara, begun in the fourteenth century but completed as late as the early twentieth century, the Italian Court, which was the seat of the kings’ mint, or the famous and iconic Ossuary of Sedlec, which is visited by thousands of curious tourists every year.
There’s not only tourism: you can simply get lost in the alleyways and find bars, pubs, and restaurants where you can try the area’s gastronomy, typical foods and famous beer.
Overall, we are sure that, after an epic Italian GP, the EnduroGP at Uhlírské Janovice will be another fascinating, even if different, event.
A race course which the riders will have to interpret to their best abilities, no matter whether they have to win points for the Championships or simply arrive at the finish line.
A competition in a fascinating area, which is important to EnduroGP and FIM, and which they want to be respected.
A place rich in history and full of attractions, which will make these three days difficult to forget.

This was only a taster: between now and September our stories will help you discover every aspect of the Czech GP.

In the end, Uhlírské Janovice is not that far away.