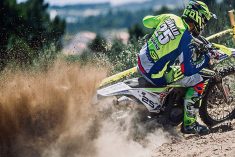 As promised, the route of the GP Acerbis of France in Ambert will be the icing on the cake after a season full of great races and epic performances.

Owing to its multi-annual experience in organizing races and top-notch events, the Moto Club Livradois managed to create a track which is really exciting for both, the racers and the fans. The Special Tests will take place not only close to one another, but also never far from the paddock.

Work is ongoing and it is likely that they won’t have a summer break in Ambert but, now that Maurizio Micheluz inspected it for the FIM, the route has been approved and we know its details and main features.

The track will have two loops.
The first one passes through nearby Le Monestier and will be around forty kilometres long. The riders will have to face the Champion Lubricants Enduro and Maxxis Cross Tests there.
The five kilometres of the first test, in and out of forests along a very smooth and fast setting, will be particularly enjoyable.
During the twenty kilometres between the Enduro Test and the Cross Test it will be necessary to catch one’s breath and be as ready as possible for the next phase.
Don’t be afraid and just go for it: this will be key to overcome the wonderful and natural jumps of this second Special Test.

The route is characterized by roots and rocks. Participants in the Open will have to ride it twice, while the Pros will have to do three laps with a shortened final lap that features the Technomousse Xtreme Test.
The first Time Check will be at the end of the first loop. Here, riders, and their bikes, will also find the service where they will be able to recharge their batteries for a few minutes before starting again.
The second loop is slightly more difficult than the first one. Special Tests aside, it will be impossible ever to let one’s guard down.
It is longer than the first one and runs eastwards, going past La Forie and La Valcivière riding south.
It includes two tight time checks and an Extreme Test right after the service: no matter the category, everyone will be exhausted at the finish line.

Although the Xtreme Test will be inspired by Motocross, the obstacles used will be entirely natural. Here, the best riders will have a chance to set themselves apart. The track along roots and rocky surfaces will be demanding regardless of weather conditions. If it’s wet, it will be extreme and only those with that little something extra will be able to achieve their goal and finish the race.

The Pros will race for more than seven hours. It will be very easy for fans to watch the most important parts of the races thanks to very efficient organization and a great location, Ambert, which is simply perfect for the last round of the EnduroGP Championships.

An amazing and sustainable event.
The GP Acerbis of France will be the first event in the country to join the FIM KiSS program.

The environment, as well as the economic and social aspects in addition to what moves the Moto Club Livradois to organize a unique ride: The Love for Enduro.