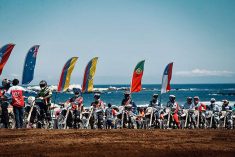 After the final two legs of the individuals’ World Championship in the Czech Republic and France, this Enduro season will not be over yet.
Most of the riders who competed in the EnduroGP will go on to follow another dream: to win the FIM International Six Days of Enduro, the oldest motorcycling competition, with their country’s national team.

Hundreds of riders from over thirty countries across the world’s five continents will attempt three different tracks in the beautiful territory of the Algarve. The 1,500 kilometres will challenge not only the riders’ technical abilities and physical resistance, but also the reliability of their bikes.

As before any competition, Maurizio Micheluz tested and inspected the tracks for FIM. He told us about them, obviously keeping in mind that some changes might be made during the week just before the races.

Days one and two.

There are 44 kilometres to warm up before the first time check. The riders will then have a few minutes at the service stations before facing this edition’s first Special Test at Budens. During the Cross Test the riders will have to compete along 6 kilometres on quite a hard surface of white sand before tackling the Enduro Test. At Alfambras the track slackens a bit between forests and meadows on uneven terrain. The 6 kilometres of Special Test will take place on sand alternating between hard and rocky turf.
Before another eight minutes of service are granted concurrently with the second time check, the riders will have to tackle 19 kilometres in order then to do the second Cross Test in Aljezeur. This will be slightly shorter than the first one and on a difficult surface of earth and rocks. The second Enduro Test promises to be spectacular: it will take place close to the paddock inside the Autodromo do Algarve on a very compact and rocky motocross surface.
The route ends in the paddock with the third check and service.
They will definitely be two very difficult days. Each one will only end once this very challenging track has been completed twice.

An Enduro Test will take place in Marmelete after only 18 kilometres. This will be on small meadows with an earthy turf going in and out of forests. The rocks here are slightly smaller so they will have to be tackled differently than those on the competition’s first day.
After more than twenty kilometres the riders will be able to take a breath before the Cross Test. Immediately afterwards, however, there is a superb stretch of forty kilometres on rocky ground along the slope of a mountain, which will be as challenging as it will be evocative, right before the second time check.
Another twenty kilometres inside a forest on very difficult terrain will be the cause of some concern to the athletes. A long ascent will then take them to the second Cross Test in Morgado do Reguengo where the racers will ride along meadows on very solid turf for five kilometres.
Just like on the first two days, the route will end at the race circuit with an Enduro Test on a compact earth and rocks. The service stations will be located close to the paddock.
Four hours per lap, four Special Tests per lap, and two laps to complete in order to end each day.
The route before the first time check is relatively rideable, but it’s the middle section before the second check which will be an enormous challenge that many riders will remember for years to come. Although the track’s third section is not as constantly difficult as the second one, it features some extremely steep slopes which means that no rider, whether professional or amateur, will be able to draw their breath and relax.

The fifth day will be characterised by gravel and rocks. The first 50 kilometres are a constant up-and-down in the hills of the Algarve. They lead to the first Cross Test of 5 kilometres in Messines. Then, there will be more than 43 kilometres until the first time check in Silves, where the first Enduro Test will also take place immediately afterwards. The next Cross Test will have to be tackled in Argebefore returning towards the circuit where the route ends just like on the other days. The second Special Test and service stations are located at the paddock. The riders need to complete the track twice.

The last day could be a moment of glory or of defeat. After the Speed Test one team will be crowned World Champion. It starts just like the route of the fifth day, but after the first check everything changes. The riders will take a dirt road which will lead them to the second time check at the Cortelha circuit. It will be here that some will cry tears of joy, some tears of exhaustion, and others tears of disappointment right after the final motocross stage.

Effort, sacrifice, pain, and only one passion: Enduro.