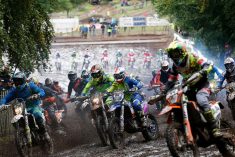 Wels, Austria – 17 September, 2019 — Germany’s Manuel Lettenbichler leads the charge to the Hawkstone Park Cross-Country, near Shrewsbury, England, for round six of the World Enduro Super Series.

With the 2019 WESS season firmly on the home straight, all eyes will be fixed on the legendary Shropshire circuit to see if Lettenbichler (KTM) can increase his championship lead over Rockstar Energy Husqvarna Factory Racing teammates Graham Jarvis (GB) and Alfredo Gomez (ESP).

Finishing first and second in 2018, Red Bull KTM Factory Racing’s Josep Garcia (ESP) and Nathan Watson (GB) will aim to use the high-speed Cross-Country race to catapult themselves back into the title fight, while Jonny Walker (GB) and Taddy Blazusiak (POL) focus in on round six as their return to the podium.

For round six, WESS makes a welcome stop at one of motorcycling’s most iconic venues. Synonymous with Motocross, Trials and Enduro, Hawkstone Park has witnessed legendary battles between motorcycling’s greatest icons since the early 1950s.

Thanks to the efforts of Paul Edmondson – a multiple world enduro champion in his own right – and his Fast Eddy Racing organisational team, competitors and spectators alike will be treated to a world-class festival of Enduro. Throughout the weekend, where up to 500 riders are set to compete, there will be races for Youth and Amateur competitors before the feature ‘Original Fast Eddy’ Cross-Country on Sunday afternoon.

At the head of the standings in the race to become this year’s ULTIMATE ENDURO WORLD CHAMPION, Manuel Lettenbichler arrives at Hawkstone Park focused on extending his lead. Highly motivated following his debut WESS victory last time out at Red Bull Romaniacs, the young German will be pushing hard.

However, round six isn’t Lettenbichler’s favoured discipline and with Classic Enduro specialists Josep Garcia (KTM – ESP) and Nathan Watson (KTM – GB) itching to show their speed, the young German will have a fight on his hands. The Red Bull KTM Factory Racing duo stole the show in 2018 finishing a commanding 1-2.

For Garcia, a recent hand injury has hampered his preparations, but already a winner in 2019, he is hungry to add to that tally. After playing second fiddle to Garcia last year, Watson is determined to make it a home round to remember this time around. As a world-renowned sand specialist, expect Watson to come out all guns blazing.

Motivated to use his home race to good effect, Jonny Walker (KTM – GB) will have a wealth of support behind him. Walker missed out on last year’s title battle due to injury, so will arrive at round six with a point to prove.

Despite missing the podium in 2018, Poland’s Taddy Blazusiak (KTM) produced an incredible second half to his race. Feeling fast, fit and strong following a fourth-place ride at round five, Blazusiak will look to make amends for his mistakes this time around.

Sitting second and third in the championship fight, Hard Enduro experts Jarvis and Gomez know the Cross-Country discipline of round six will push them outside their comfort zones. But with both riders finishing inside the top-10 in 2018, they will give it everything for another strong showing.

Fresh off his ninth-place result at Red Bull Romaniacs and sitting 10th in the championship standings, TTR Officine Rigamonti Husqvarna’s Pol Tarres (ESP) makes his Hawkstone Park Cross-Country debut. Israeli 16-year-old Suff Sella (KTM) – who ended round five in 24th – will look to build on his 19th place finish from 2018.

Sitting fifth overall in the championship, defending WESS champion Billy Bolt (Husqvarna – GB) will be missing in action as he recovers from a recent knee surgery. A podium finisher in 2018, he will be in attendance to watch the race action unfold from the sidelines this weekend, along with Paul Bolton.

Placing sixth in 2018, now Gas Gas mounted Alex Snow (GB) will be a wildcard rider to watch out for. The former Motocross star proved incredibly fast in the demanding conditions as he challenged the world’s elite Enduro riders. Seventeenth earlier this year at Trefle Lozerien AMV, Snow will be looking to break inside the top-five on home soil.

Naturally British interest rides high for round six. Eagerly awaiting their home round of the series, Eurotek KTM will be out in force with a full team line up. Missing in action for round five, South Africa’s Travis Teasdale returns to racing. A strong rider capable of pushing for a competitive finish, Teasdale will be eager to deliver a memorable result for Eurotek KTM on home soil.

Will Hoare (GB) – currently 18th in standings – will look to build on his top-15 result in 2018. The SuperEnduro Junior World champion has grown in confidence as the year’s progressed and with the full support of a home crowd will fight hard.

Although competing in the Expert class, Jane Daniels finished 21st overall in 2018 and will look to secure herself a top-20 result this time around. Harry Edmondson, Aled Price and Marc Vardy are among the stacked field of Expert riders eager to make their mark in WESS.

What To Expect At The Hawkstone Park Cross-Country?

Staged over two days, the Motocross circuit and its surrounding sandy woodland will become a mecca for Enduro racing this weekend. On Saturday the feature event will be the Fast Eddy Sprint Enduro. A Motocross and Enduro special test will see competitors go against the clock as they battle for one of the 250 places available for Sunday’s ‘Original Fast Eddy’ Cross-Country. A two-and-a-half-hour race, Sunday’s main event will see riders tackle a physically demanding 15-minute long course that utilises the best features of both the Motocross track and woodland.

The World Enduro Super Series continues with round six, the Hawkstone Park Cross-Country, on September 21-22.

WESS Championship Standings (After round 5 of 8)