All Enduro Trails Lead To WESS Finale At GetzenRodeo 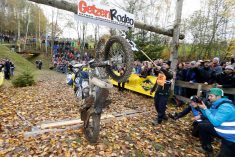 Wels, Austria – October 30, 2019 — It’s crunch time for the 2019 World Enduro Super Series as competitors head to Germany’s GetzenRodeo for the eighth and final round of the season. Home favourite Manuel Lettenbichler (KTM) stands at the top of the championship standings, all but assured of being crowned the ULTIMATE ENDURO WORLD CHAMPION.

After seven incredible rounds, the outcome of the 2019 World Enduro Super Series boils down to the GetzenRodeo Hard Enduro. With this year’s overall championship podium still to be decided, everything is to play for in the Greissbach region of Germany.

A favourite for riders, the quaint, picturesque German woodland will be transformed into a formidable Hard Enduro playground on November 2. A single-day event, racing is split into two parts. The morning two-hour GetzenRace sees riders qualify through to the afternoon’s main event – the GetzenChamp.

The 80-minute plus one-lap race, which features an exciting Red Bull X-Loop, is sure to serve up many close battles. And with over 10,000 spectators expected, plus live coverage on Red Bull TV, it’s promising a final not to be missed.

Lettenbichler Starts As Champion Elect
At the head of the standings it’s Lettenbichler who arrives at his home round as the world-champion elect. The German has consistently proved himself as the rider to beat throughout 2019, rising to the occasion time and time again.

His Red Bull Romaniacs win, followed by two top-four results, saw him etch out an unassailable championship lead. Qualifying into the GetzenChamp final will secure him the title of ULTIMATE ENDURO WORLD CHAMPION, but as the 2018 winner of the event and with home support behind him, Manni will want to make it an unforgettable day and race to the top step of the podium.

Riding high during the previous two rounds of the series thanks to a pair of podium results, Red Bull KTM Factory Racing’s Jonny Walker (GB) has lifted himself to second in the standings. While denying Lettenbichler the title will be a tall ask, cementing himself as the series’ runner-up is firmly on his mind.

Rockstar Energy Husqvarna Factory Racing’s Gomez will look to overhaul both Walker and countryman Josep Garcia, who currently sits third in the final standings. In the 2018 event Gomez battled with Lettenbichler for victory and knows that if he can secure his first WESS win of 2019, then he could put himself as high as second overall in the final WESS standings.

Jarvis Sights Third Win Of 2019
As a three-time winner of GetzenRodeo, Graham Jarvis (Husqvarna – GB) will be eager to have a say in the outcome of the race. Already claiming two wins in 2019, Jarvis wants to make it three. Nathan Watson (KTM – GB) sits sixth and just 39 points behind Jarvis in the championship. While the technical nature of the course may not be to his liking, he has shown great strides in Hard Enduro with 11th at Red Bull Romaniacs and so can’t be counted out for a surprise result.

Looking forward to ending his 2019 WESS campaign on a high, Taddy Blazusiak (KTM) will arrive in Germany searching for his first podium result of the year. Third in last year’s race, the Polish star will look to put that experience to full use.

Bolt Returns To Racing
Outgoing WESS champ Billy Bolt (Husqvarna – GB) returns to competitive action after missing rounds six and seven due to injury. Feeling fresh and fired up, Bolt will want to put to bed a difficult season with a memorable podium result.

TTR Officine Rigamonti Husqvarna’s Pol Tarres completes the top-10 in the standings. The Spaniard has been looking forward to GetzenRodeo for some time and with the venue suiting his world-class Trials skills, a potential top-five is within his capabilities.

Eurotek KTM’s Travis Teasdale holds 11th in standings and the South African should be another rider to watch. Triple D Motorsports’ Sam Winterburn (GB) rounds out the top-12 and will push for a strong end to what’s been an impressive championship campaign for the privateer.

Naturally, alongside Lettenbichler, home interest will be strong too with many local favourites competing. Kevin Gallas (Husqvarna), Leon Hentschel (Husqvarna) and Marcel Teucher (KTM) are eager to make their mark on the world-stage.

The 2019 World Enduro Super Series concludes with the eighth and final round at Germany’s GetzenRodeo on Saturday November 2.