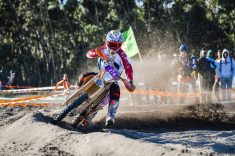 RecoverR8 Team Australia increase their lead in this year’s FIM International Six Days Enduro (ISDE) with a winning ride on day two in Portugal. Continuing to establish themselves as the nation to beat, both the Australian FIM World Trophy and FIM Junior World Trophy teams topped their respective categories.

In the FIM Women’s World Trophy class there was a change in the lead with the United States moving past Germany and to the top of the standings.

For the second day of competition the five hundred plus competitors from twenty-six nations retraced the course from the previous day. However, with roughening conditions, it was a battle of attrition for many.

At the head of the FIM World Trophy team it is RecoveR8 Team Australia, fronted by a hard charging Daniel Sanders – Husqvarna, who led the way. With Sanders winning all-but-one of the day’s seven special tests, they extend their advantage to fifty seconds over closest rivals United States.

Once again proving the closest challenger to the Australians, the United States worked hard to see all four of their riders finish inside the top-fifteen overall on day two. While the gap between the leading two nations remains relatively close, the two nations have pulled notably clear of the competition in Portimao.

Italy remain in third, but are now over five minutes off the lead. “Australia and United States are incredibly fast,” explains Italian team member Davide Guarneri – Honda. “They are setting the pace for sure. We are looking forward to what tomorrow will bring and will try to close the gap. But at the moment we need them to make a mistake, which hasn’t happened yet!”

Great Britain end day two forty seconds behind Italy in fourth, but extend their advantage over fifth-placed Finland to one-minute and thirty seconds. Spain complete the top-six thanks to the strong efforts of Josep Garcia – KTM. Currently second outright to Sanders and leading the Enduro 1 category he is enjoying his FIM ISDE return.

“It’s been a really good start to the FIM ISDE,” tells Garcia. “I’ve finished second outright both days and have extended my lead in the Enduro 1 category.”

“Daniel has proved very fast during these two days and is looking strong – for sure he’s the rider to beat. But tomorrow we arrive to a new set of special tests that I feel will work better for me on the smaller bike, so I will fight to close the gap to him.”

Matching their FIM World Trophy teammates, RecoverR8 Team Australia extend their lead in the FIM Junior World Trophy classification with a winning result. Clearly enjoying the rough and sandy conditions, the Australians are now almost three and half minutes ahead of the United States in second.

Building speed and positions in this year’s FIM ISDE, defending champions Italy move up to third on day two. Spurred on by the performance of Andrea Verona – TM, they will look to bridge the two-minute gap to the United States on day three.

“It’s been a good day and I’m happy with sixth overall and top Junior,” says Verona. “Yesterday was a tricky opening day – the special tests were fast and we caught a lot of slower traffic.”

“Starting closer to the front allowed me to ride more comfortably and I could increase my speed. For sure we have some work to do to catch the leaders, but I feel like now the race is truly beginning and we will push from here out.”

Losing time on the leaders, France slip to fourth in classification and sit twenty-seven seconds behind Italy. Great Britain round out the top five, but will need to keep a watchful eye on Spain in sixth, who look to improve on favourable conditions for day three.

Proving the team to beat on day two, United States surged to the top of the FIM Women’s World Trophy class. Truly finding their feet in the deep sandy ruts and holes, they now lead the proceedings by one-minute and eight seconds over Germany. After their winning ride on the opening day, Germany struggled to match the pace of the United States and defending champions RecoveR8 Team Australia. With the Australians racing to second on the day, they move within striking distance of overtaking Germany.

In the Enduro 1 class, Garcia continued his winning ways of day one. Establishing himself as the rider to beat, the Spaniard won all seven special tests, extending his advantage to a commanding two minutes and twenty-five seconds. While Garcia remains comfortable out front, the battle for a place inside the top-four is tight. Australian Luke Styke – Yamaha in second holds a four-second lead over the United States’ Ryan Sipes – KTM, who in turn is just eight seconds clear of Andrea Verona in fourth.

As the leading rider in this year’s FIM ISDE, Daniel Sanders also heads the Enduro 3 category. Now over four minutes clear of Great Britain’s Danny McCanney – TM in second, he has got plenty of breathing room as they face a new course for day three. Growing in confidence and speed, McCanney jumps to second position, pushing the United States’ Steward Baylor – KTM back to third. Italy’s Rudi Moroni – KTM is now fourth, with Great Britain’s Alex Snow – Gas Gas slipping to fifth.

In the Enduro Women’s class the battle for victory was played out between United States Brandy Richards – KTM and Germany’s Maria Franke – KTM. Richards bettered her rival by seven seconds to extend her overall lead over Franke to twenty-two seconds. Behind the leading duo, Australian Tayla Jones – Husqvarna is third, with Jane Daniels twenty-nine seconds behind in fourth, while Jones’ teammate Jessica Gardiner – Yamaha completed the top six.

The FIM ISDE continues on day three with competitors facing a new course and set of special stages on the Monchique Challenge route with a total distance of two-hundred and sixty-six kilometres to be covered. The FIM Vintage Trophy also gets underway with an initial acceleration test.