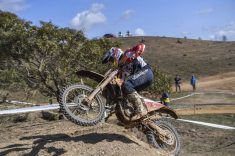 There was a change of overall individual winner on day five, with Spain’s Josep Garcia – KTM finally putting a stop to the winning ways of Australian Daniel Sanders – Husqvarna. “I’m delighted to finally get an outright win in this FIM ISDE,” said Garcia. “I’ve been pushing hard all week, but Daniel always had the edge. Today things came good and I got it done. I gave my best in every test and only made one mistake, which helped a lot.”

“It was quite slippery this morning due to the rain and mud, but as the day progressed conditions improved a lot. It’s been a tough FIM ISDE so far – I think everyone will be happy to see the finish line tomorrow.”

The end of this year’s FIM ISDE may now be in sight, but the penultimate day of racing in Portimao pulled no punches for those battling to reach the finish line of the ninety-fourth edition of the FIM’s longest-running motorcycle race. A new course for day five – Crossing the Barocal – tested the spirits of the weary competitors with a multitude of gravel and rocky trails, mixed with early morning muddy special tests due to overnight rain.

For the third day running, the United States positioned themselves as the team to beat in Portugal. Although unable to split Garcia and Sanders at the head of the overall individual field, seeing three of their four riders place inside the top-six overall ensured another team win. In doing so it lifts them to a two minute and two second lead over their Australian rivals heading into the traditional motocross races on day six.

In the battle for the final step of the podium, Spain – thanks to the efforts of Garcia – beat Italy by over two minutes. However, with the Italians ahead of the Spaniards by four minutes and thirty seconds, they remain favourites to take the bronze medal tomorrow. Finland hold fifth overall, but now head France by two minutes thirty seconds.

“It’s been another good day for the team and we’re now within touching distance of winning the FIM Junior World Trophy,” told Australia’s Lyndon Snodgrass – KTM. “With the lead we’ve got it does help to ease the stress at this stage in the race, but you still have to remain focused on the job in hand. Although we’re nearly there, one problem is all it takes to lose out. Tomorrow the goal is to play safe and secure the title.”

United States were fastest today, but not by enough to properly trouble the Australian’s ahead of tomorrow’s motocross races. Spain, third quickest on day five, are comfortably set in third. Barring any unforeseen circumstances, they should deny host nation Portugal – in fourth – the chance to finish on the podium. Fifth overall, Belgium look to claim one of their best results in recent memory – if they can keep Chile at bay.

With the United States now comfortably out front in the FIM Women’s World Trophy classification, it is looking likely that two of the FIM ISDE’s coveted trophies will find a home in America this year. If the trio of Rebecca Sheets – KTM, Brandy Richards – KTM and Tarah Gieger – Honda deliver the goods, it will mark a debut class victory for the United States.

Germany look set to finish as runners-up in the category, with Great Britain also poised for a medal result with third. Sweden and Spain are fourth and fifth respectively, while Portugal round out the top-six.

As the outright individual winner on day five, Josep Garcia powered his way to a fifth consecutive Enduro 1 day victory in Portugal. Sweeping all seven special tests for the third time this week, the Spaniard looks all but assured of the overall class win thanks to a six minute and twenty-three second lead. With one day remaining, second placed Ryan Sipes – KTM from the United States has built his advantage over Australian Lyndon Snodgrass to thirty-five seconds. Holding third overall and twenty-nine seconds up on compatriot Luke Styke – Yamaha, Snodgrass is the best placed Junior rider.

The Enduro 2 class saw one of the day’s closest battles with the United States’ Kailub Russell – KTM narrowly beating teammate Taylor Robert – KTM by seven tenths of a second for the win. Robert, however, will sleep well tonight knowing he has got a one minute and twenty-two second lead over Russell for the category win. Italy’s Davide Guarneri – Honda remains third overall, with Australian’s Fraser Higlett – Husqvarna and Josh Green – Yamaha fourth and fifth respectively.

Daniel Sanders topped the Enduro 3 class for the fifth day in a row. The Husqvarna rider also made it his fourth clean sweep of special test wins. Placing second and third to Sanders, Great Britain’s Danny McCanney – TM and Steward Baylor – KTM strengthen their footing on the final Enduro 3 podium entering day six.

The ninety-fourth edition of the FIM ISDE concludes tomorrow with the traditional motocross race, now to be held at the Kartódromo Internacional do Algarve (KIA).