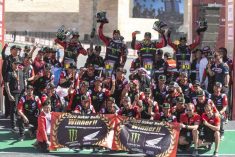 Over 30 years have passed since Honda last triumphed in the Dakar Rally. In 2020, Monster Energy Honda Team has once again laid claim to the coveted bronze Tuareg prize. Ricky Brabec makes history to become the first ever American to win the world’s toughest and cruellest rally.

After eight years in pursuit of glory, the dream has finally come true. Ricky Brabec rewarded Honda with a much desired victory. Honda had returned to the Dakar in 2013 after a 23-year absence, yet after numerous stage wins and two overall runner-up spots, the principle objective remained elusive. However, on an eighth attempt in the 2020 edition, success finally materialized. The result is, without doubt, the fruit of much long-term work by engineers, mechanics and riders, who have spared no effort to accomplish the mission of outright victory in the Dakar Rally.

Today, on the final 12th stage, Ricky Brabec made history by becoming the first American to have his name inscribed amongst the winners of the planet’s most gruelling odyssey. Brabec dominated the rally from start to finish, and today, after finishing the final special stage in second place, was able to seal the victory that he sought over the past five campaigns: overall winner of the Dakar Rally 2020. The Monster Energy Honda Team ace snatched the leadership on day three and refused to relinquish the top spot until the race wrapped up, two stage victories and 5000 kilometres later.