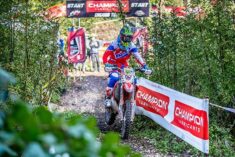 The first day of the Italian Grand Prix was contested under bright and warm sunshine. Although heavy rain and thunderstorms late on Friday made slippery special tests seem likely, conditions were actually much drier and more straight forward than expected. The FIM Borilli EnduroGP World Championship competitors attacked all three tests with gusto and a passionate crowd, all respecting Covid-19 restrictions, cheered them through every twist and turn.

Reigning World Champion Brad FREEMAN (GBR-Beta) delivered a perfect performance on this opening day of the Italian Grand Prix. From the start of the day onwards, the Factory Beta rider took the lead and never relinquished it. Consistent and quick all day, the Brit always kept his opponents at least 30 seconds behind him. He won all 3 special tests on the first lap and remained in the top 3 for all the rest. FREEMAN therefore won the day by more than 45 seconds ahead of team-mate and rival Steve HOLCOMBE (GBR-Beta). HOLCOMBE very intelligently built up his day with patience, chipping away on each test. Realising that catching up to his team-mate was hard task, the Englishman chose to settle for a safe 2nd place. This move could pay off come the end of the season.

The fight for 3rd place on the podium was absolutely superb. Three riders fought it out to take a coveted rostrum. Andrea VERONA (ITA-TM), Thomas OLDRATI (ITA-Honda) and Loïc LARRIEU (FRA-TM), each took it in turns to occupy the spot. In the end it was Italy’s OLDRATI to take the honours at his home race. VERONA and LARRIEU completed the Top 5.

Jaume BETRIU (ESP-KTM) confirmed the strong performances he managed in France by taking an impressive 6th place overall. He was ahead of Christophe CHARLIER (FRA-Beta), Danny MCCANNEY (GBR-Honda) and Antoine BASSET (FRA-Husqvarna). The disappointment of the day goes to Matteo CAVALLO (ITA-Sherco) who made too many mistakes and finished 12th. Alex SALVINI (ITA-Honda) still suffering with his shoulder did not finish the day.

In E2 Steve HOLCOMBE (GBR-Beta) completes a third success in as many starts, he was in front of Loïc LARRIEU (FRA-TM) and Danny MCCANNEY (GBR-Honda).

Junior: Theo ESPINASSE Makes It Count​
In Junior, Theo ESPINASSE (FRA-Sherco) perfectly controlled the assaults of Hamish MACDONALD (NZ-Sherco). MACDONALD was the initial leader of the day and was looking strong but he lost 40 seconds in a crash on the second lap of the tricky Xtreme. He picked himself up and began to claw back the time he lost, but the victory was out of reach. Matteo PAVONI (ITA-Beta) put his Beta Boano on the podium at home with third. Finland’s Roni KYTONEN (SF – Honda) finished 4th, while Pau TOMAS (ESP – Beta) completed the Top 5. Ruy BARBOSA (CHL-Husqvarna) finished 6th. Talented Aussie Wil RUPRECHT (AUS-Beta) had a hell of a day, he was vying for the podium but he heavily damaged his Beta in the first Xtreme Test of the day, eventually finishing 16th in the category.

In Youth Cup Jed ETCHELLS (GBR-Fantic) kept everyone in suspense until in the last special test. He won the category against an impressive Sergio NAVARRO (ESP-Husqvarna), the Fantic rider crucially beat his Spanish rival by 4 seconds. Claudio SPANU (ITA-Husqvarna) accompanied them on the podium.

Day two of the Italian Grand Prix could look quite different; the expected storms could play a big role in the classification of the race as the wet weather experts step up. We wish all our riders a good night’s sleep before tackling this last day in Italy for the FIM Borilli EnduroGP World Championship.

Brad FREEMAN (GBR-Beta): “The day was not as it seemed. I wanted to make up for my slow starts in France, so that that’s why I attacked hard in every test on the first lap. I’m really happy with how everything went. The ground was really perfect, but I don’t think we will have these kinds of conditions tomorrow!”

Steve HOLCOMBE (GBR-Beta): “I started with the wrong set-up and some bike issues, so I couldn’t relax and my riding style was therefore not like it usually is. I decided to do my best and try and secure the points for second place. I feel much more confident with the bike for tomorrow.”

Theo ESPINASSE (FRA-Sherco): “It was a good day, I’m glad I was able to keep Hamish behind me. What matters most is that I didn’t suffer physically. It was a hard day but it was well rewarded.”