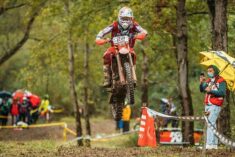 It was promised, and it arrived. The dreaded heavy rain and chilly weather hit the FIM Borilli EnduroGP World Championship for the entirety of Sunday. As could be expected, the organisers and stewards of the Italian Grand Prix made changes to the course in order to ensure the safety of all competitors, and the cream rose to the top as Steve HOLCOMBE (GBR-Beta) perfectly dominated this day, despite many pitfalls.

The Beta Factory rider felt completely at home with the weather conditions on day two of the Italian GP. Even in the middle of the deluge, Steve HOLCOMBE remained master of his discipline. His bike problems of the day before were forgotten, and the Brit was able to relax into a strong rhythm. He nevertheless had to keep a close eye on his teammate at Beta Factory: Brad FREEMAN (GBR). The 2019 EnduroGP World Champion was very threatening during the first lap, the gap even dropping below half a second at times. But FREEMAN was forced to let victory slip through his fingers, losing a few seconds in each of the tests on the last laps. However, FREEMAN and HOLCOMBE can leave Italy satisfied with their domination of the World Enduro field. Third on the day was Loïc LARRIEU (FRA-TM), more than a minute behind the British duo.

LARRIEU can be happy with this result as he had to push hard to take the coveted final podium spot. 6th at the end of the first lap, Loïc went on the offensive and was extremely impressive as the day went on, even beating local favourites. He held on to the podium from the end of the second lap onwards, setting test times close to the Beta riders.

Thomas OLDRATI (ITA-Honda) fell short of 3rd place by just 6 seconds but his general performance over the weekend satisfied the Honda rider. Andrea VERONA (ITA- TM) never quite managed to get into the groove. However, he still put in a superb performance as a Senior ranks rookie, finishing in the Top 5.

Similarly, Belgian rookie Antoine MAGAIN (BEL-Sherco) was the great revelation of the day. He was contesting the top positions throughout day but a fall in the last Enduro test forced him to cool down. However, he will certainly be one to watch in the coming races.

Hamish MACDONALD Takes First Junior Win
Very disappointed after missing out on victory due to a crash on Day 1, New Zealand’s Hamish MACDONALD (Sherco) took his revenge on his Sherco team-mate Théo ESPINASSE (FRA-Sherco) on Day 2. The rider from the southern hemisphere played all his cards right in the tricky conditions, winning by more than a minute in only his second race in the Junior class. Last year’s Youth 125cc Cup winner was thrilled with this strong result which keeps him in contention.

Wil RUPRECHT (AUS-Beta) made amends for his Day 1 difficulties by taking a fine podium with 2nd place in the category. The Australian was ahead of Théo ESPINASSE (FRA-Sherco) by just under 2 seconds. The Frenchman who was so strong at his home race in Requista is still at the top of the standings however.

Ruy BARBOSA (CHL-Husqvarna) upped his game on Saturday. The Chilean still struggled a bit under the downpours, but today’s 4th place should give him the confidence to aim higher next time out.

In Youth Cup, Jed ETCHELLS (GBR-Fantic) was completely unfazed by the mud and took victory by more than a minute over Spain’s Sergio NAVARRO (ESP-Husqvarna). ETCHELLS’ team-mate Harry EDMONDSON (GBR-Fantic) completed the podium. Fantic will certainly be satisfied as their third rider, Hugo SVARD (SF – Fantic) made it three Fantics in the Top 5 with 4th place.

In the Champion Enduro Open World Cup, the 4-Stroke category was again dominated by Mathias VAN HOOF (Husqvarna) ahead of his compatriot Damiaens DIETGER (KTM). They were once again accompanied on the podium by Jorge RODRIGUEZ PARADELO (ESP-Husqvarna). In the 2-Stroke category the podium is a copy / paste of the day before, namely Goncalo REIS (PRT-KTM) won ahead of Goncalo SOBROSA (PRT-Beta) and Robert FRIEDRICH (CZE-KTM). In Senior, Alessio PAOLI (ITA-Husqvarna) took another impressive victory in front of Duccio GRAZIANI (ITA-Beta) and David MARTINEZ CORBALAN (ESP-KTM) still 3rd.

The Italian Grand Prix brought a little bit of everything to the party; enthusiastic fans, unpredictable weather, challenging tests, and great racing! The FIM Borilli EnduroGP World Championship will reconvene in November for two back-to-back in Northern Portugal.

Steve HOLCOMBE (GBR-Beta): “I really wanted to take advantage on the first lap so I attacked very hard. I kept up the effort during the second lap and built a margin. I am happy because the technical choices the team and I have made are going in the right direction and today’s result is proof of that.”

Brad FREEMAN (GBR-Beta): “I can’t say I’m happy with my day. I just didn’t know how to get into the right rhythm. I got through the day and I have to take my hat off to Steve who was absolutely on fire. The fight continues, there are 4 days of racing left, anything can happen and I will be ready to battle.”

Hamish MACDONALD (NZ-Sherco): “Yesterday I was upset to lose the win due to one crash in the Xtreme Test. Today I put that all behind me and even though it was a tough day I had good speed and I’m really happy to win my first race in Junior, now I just need to do it again…”

Mathias VAN HOOF (BEL-Husqvarna): “I loved this GP, I really enjoyed the Enduro Test and these 2 days of riding were absolutely magical, I would have liked to continue for one more lap!”