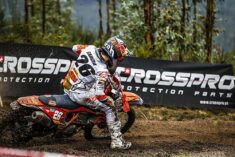 This weekend, the FIM Borilli EnduroGP World Championship season will end with a second GP in two weeks in Marco de Canaveses, Portugal! With all the titles yet to be awarded, the weekend promises to be thriling!

The Same, Yet Different…
So it’s once again Marco de Canaveses and the Motor Clube Marco that will host the best Enduro riders in the world this weekend for the last event of the year. The riders will have a slightly “watered-down” route compared with the tough one last weekend and the special tests will be run in reverse order. Therefore, the lap will start with the Technomousse Xtreme Test followed by the Akrapovic Cross Test before the first time control. The second part of the lap will only involve the Champion Enduro Test. Note that, like last week, there will be no Akrapovic Super Test on Friday evening due to Covid safety standards!

Marco de Canaveses, situated in the District of Porto, is a haven for Portuguese Enduro and even though the fans will not be allowed to spectate throughout the weekend, there is no doubt that the Motor Clube Marco will do a brilliant job of welcoming the riders, teams, and media once again!

GARCIA – The Spoiler For HOLCOMBE & FREEMAN?
Seven points is all that separates the top two riders in the EnduroGP standings. It seems that the battle will come down to the wire between Steve HOLCOMBE (GB – Beta) and his team-mate Brad FREEMAN (GB – Beta). Picking the winner is impossible, especially as both riders have vowed to give their all from the first special test to the last. However, everything will be made harder for the British duo with the presence of Josep GARCIA (E). The KTM Factory rider made a thunderous comeback last weekend (3rd/1st) after three years of absence, and he could well play the spoiler in the race for the title! Behind this fantastic trio, the battle will rage once again between Loïc LARRIEU (F – TM), Andrea VERONA (I – TM), Thomas OLDRATI (I – Honda) and Jaume BETRIU (E – KTM) to try and snatch a spot on the final podium. Also watch out for Danny MCCANNEY (GB – Honda) and Antoine MAGAIN (B – Sherco) who still have their say for a place in the final Top 5. Finally, we should also see a good race between Matteo CAVALLO (I – Sherco), Joe WOOTTON (GB – Husqvarna) and Antoine BASSET (F – Beta) for the chance for a place among the Top 10 fastest riders of the year!

In E1, the last act in the race for the title between the two Italians Andrea VERONA and Thomas OLDRATI will likely only be decided in the final moments of the weekend! Only 4 points separate the Factory TM rider from the Honda man. And while it seems that Antoine MAGAIN has done enough to secure his place in the Top 3 of the standings, Eero REMES (SF – Yamaha) and Davide SORECA (I – Beta Boano) will give their all to take 4th position!

As for E2, Steve HOLCOMBE could be crowned on Saturday if he finishes ahead of Loïc LARRIEU, who is currently second in the provisional standings. However, the Frenchman is not yet guaranteed to finish as Vice-World Champion since he remains under threat (only 6 points) from his ex-teammate Danny MCCANNEY! Matteo CAVALLO will also have to work to secure his 4th place against an ever-improving Joe WOOTTON (GB – Husqvarna). But watch out for Max VIAL (F – Beta), Anthony GESLIN (F – Beta) and Josep GARCIA (E – KTM) for the last place in the Top 5.

Over in E3, Brad FREEMAN is also very likely to be crowned on the first day of racing, while Jaume BETRIU and Antoine BASSET are the main protagonists for the final places in the Top 3. Meanwhile, David ABGRALL (F – Beta) and Cristobal GUERRERO (E – Beta) will have to focus on countering the attacks of Marc SANS SORIA (E – KTM) and Rudy MORONI (I – KTM).

MACDONALD Heading For 2 Titles in 2 Years…
Last weekend everything changed in the Junior ranks when we witnessed an early DNF for Théo ESPINASSE (F – Sherco) on Day 1. His team-mate Hamish MACDONALD (NZ – Sherco) took full advantage of the situation and rode to a double victory. The 2019 Youth 125cc Champion is now 19 points ahead of the Frenchman, and he only has to finish ahead of him to achieve the excellent achievement of back-to-back Youth and Junior titles! But in view of the determination of ESPINASSE, it won’t be that easy. Add to that the rise in power of riders such as Roni KYTÖNEN (SF – Honda), Wil RUPRECHT (AUS – Beta Boano) and Bruno CRIVILIN (B – Honda) and this Under 23 category will be very interesting until the end!

In the individual Junior classes, KYTÖNEN and BARBOSA lead the way in J1 and they are likely to have a fierce battle for the crown. And Lorenzo MACORITTO (I – Beta Boano) and Bruno CRIVILIN (BR – Honda) will fight it out for 3rd spot in the standings. In J2, MACDONALD could also win the World Cup on Saturday while behind him there will be a 100% Beta Boano duel between Wil RUPRECHT and Matteo PAVONI (I) for the last step of the podium, which is impossible to call!

In Youth 125cc, the quartet of Jed ETCHELLS (GB – Fantic), Sergio NAVARRO (E – Husqvarna), Claudio SPANU (I – Husqvarna) and Harry EDMONDSON (GB – Fantic) will be thrilling to watch as they fight it out on every test of the weekend! Above all, NAVARRO and SPANU will be going all out in a final attempt to topple ETCHELLS!

Finally, this last round of the season will also be the scene of the final of the FIM Women’s Enduro World Cup! The 2019 title holder, Jane DANIELS (GB – Husqvarna) will be present but will have to face many outsiders such as Mireia BADIA (E – Husqvarna), Rita VIEIRA (P – Yamaha), Rosie ROWETT (GB – Husqvarna), Justine MARTEL (F – KTM) and Nieve HOLMES (GB – Gas Gas). These two days of racing will be very interesting to follow. Also note the participation of South Americans Janaina SOUZA (B – Honda), Barbara NEVES GONZAGA (B – Honda) and Tania GONZALEZ (CL – Fantic).

The fourth and final round of the FIM Borilli World Enduro Championship could be one of the most exciting events ever as the shortened calendar comes to an intense end. One thing is certain; the stars of the discipline will be giving everything to go after the holy grail; a World Champion title!